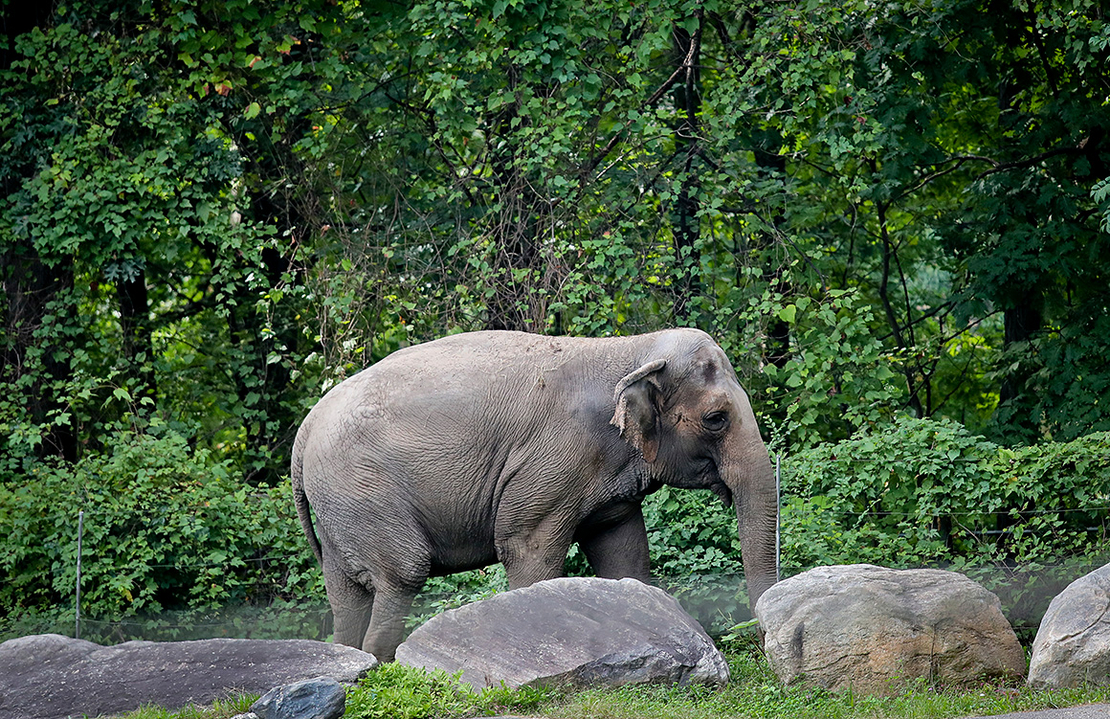 Happy the elephant will get her day in court, and potentially open the door for other animals to follow, with the help of high-profile advocates who contend the lumbering zoo resident deserves a fundamental legal right.

In a potentially groundbreaking case, famed Harvard Law School professor Laurence Tribe has joined philosophers, theologians and a menagerie of others in arguing that Happy is a “legal person” with the corresponding right to seek freedom from what Tribe calls “her imprisonment” by the Bronx Zoo.

“Now fifty years old, Happy remains in solitary confinement, unable to lead a physically, intellectually, emotionally and socially complex life despite her capacity to do so,” Tribe and several other prominent law professors wrote in a legal brief filed late last month.

Tribe’s amicus brief is the latest of many to be filed with the New York state Court of Appeals, which sometime next year will hear the Nonhuman Rights Project argue that Happy, just like a person, enjoys habeas corpus protections (Greenwire, Dec. 18, 2020).

Happy’s advocates note that this marks the first time that the highest court of any English-speaking jurisdiction will hear a habeas corpus case brought on behalf of someone other than a human being.

The core question in any habeas corpus case is whether a detention is legal.

“There’s something about autonomy, about being able to choose how to live your life, that the courts have always found to be important,” Wise said. “And there’s no non-arbitrary reason for the courts to say by the way, what species is it?”

Attorney Kenneth Manning, representing the Bronx Zoo, countered during trial court oral argument that Happy’s lawyers “[do] not cite any sources indicating that the United States or New York Constitution were intended to protect nonhuman animals’ right to liberty.”

In an amicus brief, groups including the Alliance of Marine Mammal Parks & Aquariums further warned that a victory for the elephant would “open the floodgates to more cases like Happy’s, thereby creating societal and economic upheaval.”

New York Supreme Court Justice Alison Tuitt, in a February 2020 opinion, said legal precedents from cases involving chimpanzees “regrettably” obliged her to side with the zoo.

“The courts have held that animals are not ‘persons’ entitled to rights and protections of supported by the writ of habeas corpus,” Tuitt wrote.

Pointedly, though, Tuitt added that “Happy is more than just a legal thing or property. She is an intelligent, autonomous being who should be treated with respect and dignity and who may be entitled to liberty.”

Happy is an Asian elephant who was captured as a baby in the early 1970s and sold along with six other calves to the now-closed Lion Country Safari in Southern California.

In 1977, Happy and another elephant named Grumpy were sent to the Bronx Zoo.

Her quality of life is a matter of dispute.

Happy’s environment at the Bronx Zoo “includes large natural outdoor space that allows her to swim, forage, and engage in other natural behavior,” according to zoo officials, who add that “Happy has adapted well to her outdoor habitat, has contact with the zoo’s other elephant [and] is closely bonded with her caregivers.”

But the Nonhuman Rights Project, in its original 2018 petition, declared that “human caregivers are no substitute” for the company of other elephants and that the zoo’s “imprisonment of Happy deprives her of the ability to exercise her autonomy in meaningful ways, including the freedom to choose where to go, what to do, and with whom to be.”

The group was founded in 1996 as a project of the Center for the Expansion of Fundamental Rights and was renamed in 2012.

Besides chimpanzees and elephants, the group says, "our other potential clients include orangutans, gorillas, bonobos, dolphins, and whales."

In a 1983 case involving “Blackie the Talking Cat,” which would meow what sounded like words, the 11th U.S. Circuit Court of Appeals said in a footnote that Blackie “cannot be considered a ‘person’ and is therefore not protected by the Bill of Rights.”

And in a 2012 case involving SeaWorld, a federal judge determined that “the only reasonable interpretation of the Thirteenth Amendment’s plain language is that it applies to persons, and not to nonpersons such as orcas.”

Like the U.S. Supreme Court, the New York Court of Appeals agrees to hear only a fraction of the cases — roughly 5 percent — submitted to it. A hearing date has not yet been set.

“We believe this legal moment for Happy represents a key cultural crossroads for thinking more openly and honestly — and less selfishly — about what it would mean to treat the particularity of non-human animals with the moral seriousness it deserves,” five Roman Catholic theologians wrote in an amicus brief.