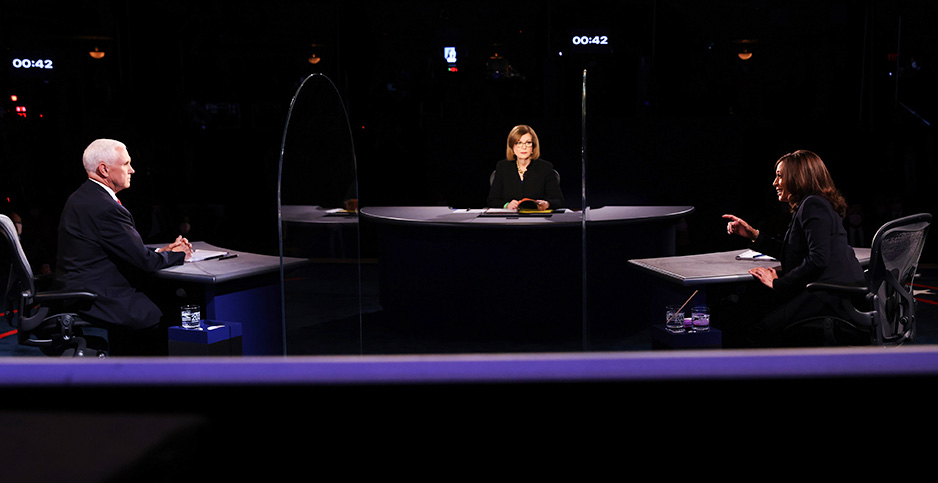 His blitz forced Sen. Kamala Harris, the Democratic vice presidential nominee, into defensive explanations about her running mate Joe Biden’s climate plans. She ultimately steered the discussion away from climate.

Public reaction to the clash will test months and months of polling that suggests aggressive climate action is more popular than maintaining business as usual. But whatever the response, Harris’ performance indicated Democrats still struggle to frame climate policy as an economic benefit in the face of conservative attacks, despite the mounting costs of inaction.

Pence doubled-down on questioning humanity’s role in warming. And some of his statements — like his assertion that the Trump administration shapes its policies according to climate science — were outright falsehoods.

But the vice president nevertheless sidestepped scrutiny of the Trump administration’s climate record by accusing the Biden-Harris ticket of environmental extremism. Harris seemed to spend more time answering that charge than prosecuting her own case.

That asymmetry was on display throughout the vice presidential debate, as Pence raised the Green New Deal during unrelated topics to argue that Democrats would institute expensive, meddlesome restrictions on average people. Harris seldom wielded climate the same way.

Instead, she repeated Biden’s positions in similar ways as Biden himself did last week in the first presidential debate. She talked about creating clean energy jobs and how the Trump administration scrubbed climate science from federal websites.

But Pence kept returning to fracking, and Harris kept following him there.

"I know Joe Biden says otherwise now — as you do — but the both of you repeatedly committed to abolishing fossil fuel and banning fracking," Pence said.

Harris did propose a fracking ban during her presidential campaign, along with other plans to Biden’s left, like abolishing the Senate’s filibuster to pass climate legislation.

But fracking has been key to Biden’s courtship of organized labor — especially in Pennsylvania — and gas-supporting union leaders played a major role in shaping his climate plan.

The Democratic plan calls for reaching net-zero emissions by 2050, but Biden has signaled that fossil fuels could remain in the mix if their emissions can be captured and sequestered.

Harris had a simpler message.

"Joe Biden will not ban fracking, he has been very clear about that," she said.

Pence reprised his attack, and Harris said it again: "First of all, I will repeat — and the American people know — that Joe Biden will not ban fracking. That is a fact. That is a fact."

Harris’ fracking assurance was the main climate message from the debate amplified by Biden’s campaign.

"’Biden will ban fracking’ has got to be close to being the lie of the year," Stef Feldman, Biden’s policy director, tweeted during the debate. It was her only post about Harris’ climate comments.

Likewise, that was the only climate message Harris’ team echoed during the debate.

.@JoeBiden will not ban fracking. That is a fact.

‘She can do much better’

"Kamala was good in the Presidential [primary] debates on climate — always on offense. I don’t know what happened tonight," Evan Weber of the Sunrise Movement said on Twitter.

"She can do much better, & I hope she will going forward, because it’ll help Dems win the election."

Specific parts of Biden’s plan — including a clean electricity standard, $2 trillion in climate investments and environmental justice goals — poll strongly in swing states, according to August surveys by Data for Progress.

"On the climate crisis, we need to get out of our defensive crouch. This is a winning issue," tweeted Jamal Raad, a veteran of Washington Democratic Gov. Jay Inslee’s presidential campaign.

Harris did aim some climate attacks at Pence. The Biden campaign has sought to link the Trump administration’s poor pandemic response with its disregard for climate science, and Harris echoed that line.

"We have seen a pattern with this administration, which is that they don’t believe in science," Harris said, though she didn’t explicitly connect climate to COVID-19.

"I remember hearing about some Infrastructure Week," she said. "I don’t think it ever happened. But Joe Biden will do that. It’s about upgrading our roads and bridges, but also investing in clean energy and renewable energy."

Pence said Biden’s plan to retrofit millions of buildings for energy efficiency would cost jobs — at which point Harris pivoted to talking about trade with China.

Pence claimed the environment has never been better, and that fracking will help solve climate change.

Atmospheric carbon has surpassed 411 parts per million, according to federal data. That’s the highest it’s been since about 3 million years ago, when sea levels were some 50 feet higher.

"According to all of the best estimates, our air and land are cleaner than any time ever recorded," Pence said at the debate.

Scientists have known for decades that human emissions of greenhouse gases are causing temperatures to rise. The vice president cast doubt on that.

"The climate is changing. The issue is, what’s the cause? And what do we do about it? President Trump has made it clear that we’re going to listen to the science," Pence said, before disputing climate’s role in intensifying wildfires and hurricanes.

"Many of the climate alarmists use hurricanes and wildfires to try to sell the bill of goods of a Green New Deal," he said.

The Trump administration has systematically rolled back emissions-cutting regulations on power plants, vehicles, oil and gas extraction, and lightbulbs. But U.S. emissions have still trended down in the last four years as utilities shuttered uneconomic coal-fired power plants.

Pence said the credit belongs to Trump’s free-market approach, even as he said the administration would protect energy jobs.

"They want to bury our economy under a $2 trillion Green New Deal," Pence said.

Pence also framed climate policy as bowing to China. He argued that emissions regulations would send more manufacturing jobs overseas, and he attacked Harris for opposing the U.S.-Mexico-Canada Agreement on free trade.