Harvard enviro law guru on his biggest win, why he worries 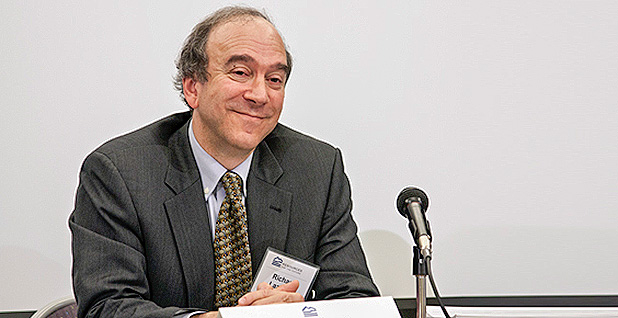 Richard Lazarus. Photo courtesy of Resources for the Future.

To his close friends, he’s Richy.

The Harvard Law School professor is well known in environmental and legal circles. He’s argued before the Supreme Court 14 times and participated in 42 cases before the high court. He’s also the former roommate of Chief Justice John Roberts.

Lazarus has taught at top law schools, worked in the Justice Department’s environmental division and was executive director to the commission investigating the Deepwater Horizon oil spill in 2010.

He recently spoke to E&E News about his longtime friendship with Roberts, sizing up Supreme Court justices and his stint selling ice cream in Urbana, Ill.

How profoundly could the Trump administration change environmental law?

If past is prologue, not that much. We’ve seen these threats happen routinely since the early 1970s. People have written and rewritten environmental law’s obituary. And every time, it seems to be surprisingly resistant and it seems to bounce back stronger than ever. … The one reason to worry — because I do worry — is without worrying, it could happen. Complacency is never warranted.

I grew up in Urbana, Ill. My father was a professor of physics, and my mother basically was a community worker on women’s rights and girls and … youth and mental health.

When I was a teenager, 15 years old, I was an ice cream salesman. … It was one of the best jobs I’ve ever had in my life. I had one of those tricycles, reverse tricycles. … It was basically a freezer with dry ice on a bicycle, and you would ride the bicycle all over town selling Popsicles, Creamsicles and fudge bars and ice creams bars. … You were the most popular person in the entire world. You would drive up and down the streets, and literally kids would come flying out.

Why did you become an environmental lawyer?

I decided to become an environmental lawyer when I was 17 years old. … I left college after my first semester, and I traveled around Europe second semester. … I tried to decide what it was I could be really good at and care about and make a difference. It was 1972, Earth Day had happened a couple of years before that. I was a very politically active kid.

What do you see as your biggest legal victory?

I’ll just give you one that is particularly satisfying to me, and that is the City of Chicago v. Environmental Defense Fund case. It’s a … Supreme Court decision involving the Resource Conservation and Recovery Act. That was a case when I first got it, I thought the odds were fairly high that we might lose that case unanimously 9-0, and we managed to win it. … [Justice Antonin] Scalia wrote it, and it was a particularly gratifying win because we had everything against us. … We had both EPAs against us, both [George H.W.] Bush and Clinton, and we had obviously industry against us, and we managed to win that one with an opinion by Scalia based on plain meaning.

Which justice (current or former) has been the most unpredictable?

I always figured the most gettable was [Sandra Day] O’Connor, in the sense of, she did not have any preordained pathways. … The justices who are just entrenched, that makes them predictable. Then there are justices who I had the sense I could try to get their vote because they weren’t predictable and they wouldn’t just follow some past pathway.

Which justice would you most like to have dinner with?

That’s going to be the chief [Chief Justice John Roberts]. Hands down. But that’s because we have dinner together. Our politics are obviously very different. We are very close friends. We’ve long been close friends, our families are close friends. We were classmates in law school, we were roommates after law school for about four years.

Where did you live together?

On Capitol Hill. By Eastern Market. I was at the [DOJ] environment division, he was clerking for [Chief Justice William] Rehnquist when we first were roommates. It’s a friendship which has lasted a long time. … We obviously don’t talk about our Supreme Court work.

You’re often called the "dean of environmental law." Do you have any other nicknames?

My favorite one … was the "solicitor general for environmental law." … I like that one more because I’ve had different opportunities to be a dean, and I’ve very carefully avoided it. The idea of being a dean does not really attract me. The idea of being the SG for a certain voice of advocacy does appeal to me.

Your friends call you Richy?

That’s my family name. My parents, my brother and sisters always called me Richy growing up. … If you meet anyone from the Justice Department, they’ll call me Richy. At Georgetown, I was there long enough that a bunch of them switched to Richy. … At Harvard Law School, I’m Richard. And with anyone near my wife, I’m Richard. … I’m perfectly fine with whatever.

We have a cat, Isabel. … She’s a little bit insane. Every once in a while, she looks at you like she’s never seen you before in her entire life. You’ll walk into the room, and she’ll look up and she’ll run for her life.

What are your sports allegiances?

The University of Illinois, all things Illinois. The Red Sox, the Washington Nationals and the St. Louis Cardinals.

What TV shows are you addicted to?

"Game of Thrones." It’s something that my wife and I resisted because it looked so violent and completely over the top. But our younger son … convinced us to look, and we just love it. The best show I think I’ve ever watched is "The Wire."