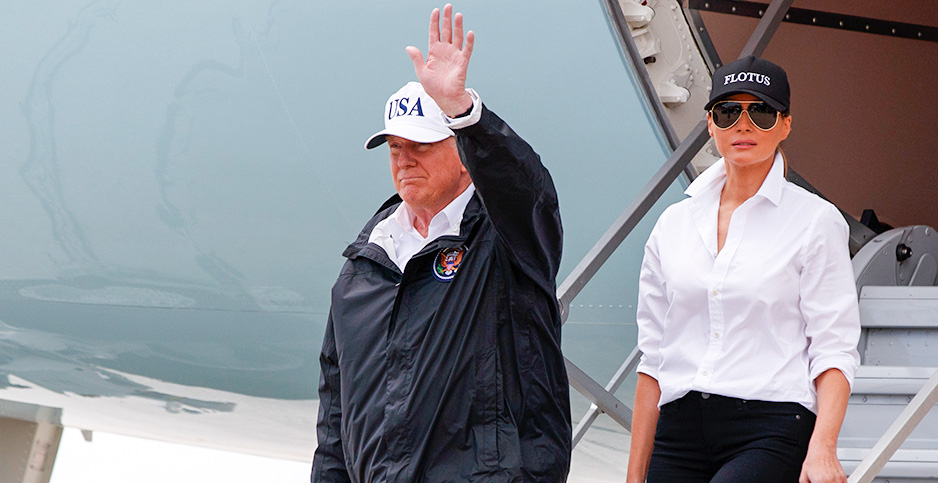 President Trump’s affinity for spectacle and publicity has led him to comment often on the enormity of Hurricane Harvey, at once underscoring the opportunity for the president to offer leadership as Americans face a crisis and highlighting the president’s misunderstanding about how frequent such events are becoming.

Trump arrived in Corpus Christi, Texas, today to survey an area that’s still getting pounded by heavy rain after Harvey made landfall as a Category 4 hurricane Friday. The president tweeted often in advance of and since Harvey hit, marveling at its size — much as he does with crowds at his campaign rallies — and the unprecedented nature of the storm.

"We’ve pledged our full support as Texas and Louisiana battle and recover from this very devastating and historic storm," Trump said a news conference yesterday. "There’s probably never been anything like this."

That is, perhaps, true. The financial toll, not to mention the loss of human life and property, may well set records once the wreckage is cleared. Trump said he spoke to congressional leaders who assured him a rescue aid package would come "quickly." How much is the real question. Congress approved $50 billion and $62 billion for the Superstorm Sandy and Hurricane Katrina recoveries, respectively (see related story).

Trump knows the world is watching him handle the "epic" and "historic" flood, as he referred to it yesterday, even remarking that he pardoned former Maricopa County, Ariz., Sheriff Joe Arpaio as Harvey hit Texas because he "assumed the ratings would be far higher than they would be normally" — a comment that earned him rebuke.

The president has appeared engaged, holding Cabinet meetings, speaking daily with Texas Gov. Greg Abbott (R) and making frequent comments on Twitter and public statements. He’s also showed empathy with those in the Gulf Coast affected by flooding, saying yesterday, "We are one American family. We hurt together, we struggle together and, believe me, we endure together."

But the president who resurrected his career with television fame on "The Apprentice" should resist his showmanship urges, said Richard Sylves, a professor emeritus at the University of Delaware and an expert on disaster policy and politics. He recommended Trump delay the trip altogether to avoid being photographed much like former President George W. Bush when he looked at the post-Hurricane Katrina carnage from above in Air Force One.

"[I]t would be truly ill-advised for the President to engage in photo ops at this time; they are staged for media coverage and do not measurably contribute to the response and recovery," Sylves said in an email. "Too many presidents have succumbed to this temptation in the past and many have paid a price politically for this mistake."

That may be especially true for a president who has ignored climate science, put funding for the kind of weather forecasting that alerted local officials to Harvey in jeopardy, and pledged to cut emergency preparedness and response aid on which local and state governments depend.

Man-made factors contributed to the destruction that Trump — a man keenly aware of optics and attuned to size — may not have recognized when he tweeted, "Wow — Now experts are calling #Harvey a once in 500 year flood!"

In fact, the Harvey fallout isn’t even the first 500-year flood Houston has endured in recent memory, said Mohan Rajasekar, founder and CEO of InsurTech startup Syndeste, a firm that maps floodplain and flood risks through its "Beyond Floods" app. He said the nation’s fourth largest city has endured three storms since 2000 that exceeded the 500-year flood flows.

Climate change has played a role in making that 500-year figure a misnomer, as rising temperatures have supercharged the atmosphere, said Daniel Kreeger, executive director of the Association of Climate Change Officers.

"It has no context. It’s not supposed to happen this often," Kreeger said. "We also don’t expect that what used to happen every 500 years won’t happen again."

It might not be surprising that a man who famously called climate change a Chinese hoax seemingly misinterpreted that 500-year flood metric. The distinction is merely a statistical calculation that means there’s a 0.2 percent chance a flood of that size or greater occurs in a given year.

Climate change has helped warp that calculation. The 100-year, 500-year, whatever-year flood events are built on the concept of "stationarity" — that what was true of the past will also be true in the future. But there’s now more moisture in the air from enhanced evaporation due to higher temperatures, all of which contribute to more intense rainfall events. Rising sea levels also feed higher storm surges. So while climate change may not have caused Harvey, it likely made the storm more intense.

"Over the course of the last 200 years in which we have built these trillion-dollar infrastructure [investments], the climate has been relatively stable, so you could assume stationarity and get away with it," said Katharine Hayhoe, a climate scientist at Texas Tech University. "But now the climate is changing. That assumption is no longer valid."

Where Trump might score a political win is through approving funds and policies to rebuild the area quickly, the University of Delaware’s Sylves said, allowing him to capitalize on his image as a builder.

But whether Trump would do so in a climate-smart way that avoids the decades of mistakes of U.S. flood management and construction policies is an open question.

That Trump revoked an Obama-era executive order that recognized sea-level rise, more intense storms and frequent flooding linked to climate change 10 days prior to Harvey hitting has illuminated the president’s aversion to climate science, a move roundly slammed by fiscal conservatives, insurers and environmentalists but praised by homebuilders.

While the Trump administration noted local and state governments are free to impose their own standards, Texas is an example of when states are left to their worst devices.

The Lone Star State has notoriously lax zoning laws, permitting construction in potentially unsafe places. About 71 percent of properties at very high risk of flooding in the 30 counties for which Texas Gov. Abbott declared an emergency are uninsured, according to the website Beyond Floods.

Even more, the federal government has subsidized home construction in vulnerable flood zones by offering cut-rate flood insurance that private firms avoid. The 30 affected counties in Texas have filed 186,500 claims through the National Flood Insurance Program since its inception at a cost of $5 billion to the program, Beyond Floods said.

The federal flood insurance program, severely in debt, is up for reauthorization this fall, though Congress is unlikely to seriously change it since it in 2014 bucked to pressure from coastal communities to reverse program alterations lawmakers passed two years prior (see related story).

Houston is a poster child for the phenomenon, as a mix of climate change and unfettered building created conditions ripe for a catastrophe. ProPublica and The Texas Tribune found impervious surfaces grew by a quarter between 1996 and 2011 in Harris County, where Houston sits. Meanwhile, the storm surge rode off higher Gulf of Mexico waters that were warmer than usual, which, when combined with above-average surface temperatures, contributed to the rainfall that’s still hitting the area.

Soon, there may be more clarity on how recent precipitation events have changed in Texas. NOAA is nearly finished with its Texas portion of the "NOAA Atlas 14" study, which is analyzing all available historical observations to produce precipitation frequency estimates such as 500-year estimates, said Sanja Perica, chief of the National Weather Service’s Hydrometeorological Design Studies Center at the Office of Water Prediction. The study is heading for peer review this year and will be finished in mid-2018, she said.

Perica stressed a 500-year rainfall does not equate to a 500-year flood, given the effect impervious surfaces have on draining water from the landscape and that when talking about the frequency of a 500-year, the following elements should be specified: duration, location and area size. The same amount of rainfall can be categorized as a 1,000-year event or a 10-year event, depending on duration, location and extent.

She also noted that while studies show there is more moisture in the atmosphere, that "doesn’t necessarily translate to more frequent or extreme rainfall across all locations."

"But in any case," she said, "it is a non-stationary process and should be handled as such."