Has a decade of Golden State climate diplomacy made a difference? 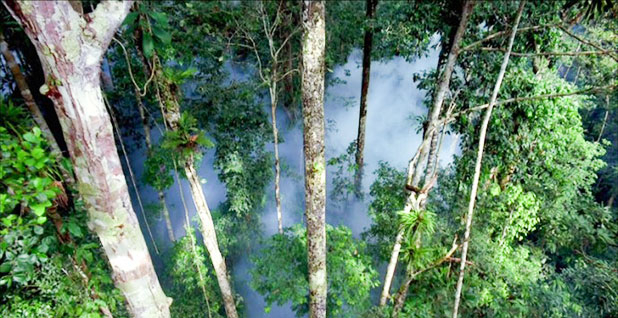 Can California save the Amazon rainforest? Ten years after the state's landmark climate law was established, its ability to work with other countries to curb deforestation remains unclear. Photo courtesy of the U.S. Agency for International Development.

Second of a two-part series looking at the impacts of A.B. 32 10 years later. Click here for part one.

GUADALAJARA, Mexico — The Brazilians are frustrated.

They’ve just learned that California, yet again, has delayed making a decision on whether to allow its businesses to fund greenhouse gas reduction efforts in other countries.

"Should we continue to do all this effort?" asks Luiza Lima, who coordinates the activities of the eight Brazilian states that are members of the Governors’ Climate and Forests Task Force, a group set up by former Gov. Arnold Schwarzenegger (R) in 2008. "Is it worth it?"

Many experts believe accepting international offsets is the most direct route to a goal that has long eluded climate policymakers: reducing deforestation in developing countries. The burning and clearcutting of trees accounts for 15 to 20 percent of greenhouse gases worldwide, according to current estimates, and the fifth assessment report of the United Nations’ Intergovernmental Panel on Climate Change, released in 2014, found that more than half of total emissions reductions by 2030 could come from land-based actions like slowing the pace of forest degradation and switching to biofuels.

After six years of study, however, California has still not decided whether to recognize international forestry offsets, under which businesses would pay governments, landowners and indigenous groups to restore forests or keep them intact. The reductions would count toward California’s own emissions cap of 1990 levels by 2020. A decision was expected by spring of 2017, as California considers other revisions to its cap-and-trade system, but this summer officials decided to put it off in favor of further deliberation.

"We put out in public in our draft cap-and-trade regulation that we think they have an important role," Richard Corey, executive officer of the California Air Resources Board, told Brazilian delegates over lunch at the task force’s annual meeting last month in the state capital of Jalisco, Mexico. "We think offsets play an important role in the program; we think sector-based offsets need to have a role, but we need to go through a continued public process to work through every issue that folks have raised, concerns that they’ve raised. That’s the process we’re working through."

It’s arguable whether California’s greatest contribution to the climate change battle will be its in-state or extraterritorial efforts. California accounts for 1 percent of greenhouse gases worldwide, but its potential to affect other states and countries dwarfs that. One of the longest-running international efforts from California, now 10 years into its landmark climate change law, A.B. 32, has been to encourage rainforest preservation in equatorial regions in the hopes that it can amplify its own emissions reductions beyond its borders.

Schwarzenegger, and now his successor, Gov. Jerry Brown (D), have made a point of signing agreements with dozens of other state and provincial governments to reduce carbon emissions. Brown’s marquee international effort, the Under 2 MOU (memorandum of understanding), now has 135 signatories committed to limiting emissions to 2 tons per capita by 2050.

Officials at the state Air Resources Board are walking a fine line, trying to balance in-state political pressures with their desire to avert global climate change. The question is whether they will be able to export viable policies that will encourage emissions reductions outside their borders.

"Are we trying to save California, or are we trying to save the world?" an ARB board member, former state Sen. Dean Florez (D), asked earlier this month in a debate at Yale University over whether to admit "sector-based" forestry reductions, also known in U.N. parlance as REDD+ (Reducing Emissions from Deforestation and Forest Degradation in Developing Countries). "In some sense, the answer may be both."

Some groups see markets as a ‘threat’

The task force was founded at Schwarzenegger’s Governors’ Global Climate Summit in Los Angeles in 2008, two years after he signed A.B. 32, the landmark 2006 law that set a target of 1990 emissions levels by 2020. Since then, the group has grown from an initial 10 regional governments to 35. It encompasses about a quarter of the world’s tropical forests, including vast swaths of Brazil, Indonesia, Peru and Mexico.

But only the province of Acre, Brazil, is close to being robust enough in its monitoring and stability to provide the kind of assurances California would like. Six years after Schwarzenegger signed an additional agreement in 2010 to explore offsets with Acre and the state of Chiapas, Mexico, California officials are still not sure whether they will establish a formal link.

One of the reasons California has not done so is the opposition of environmental justice groups, who argue greenhouse gas reduction methods must ameliorate the effects of conventional air pollutants as well. Accepting offsets from rainforests, they say, would deprive Californians of the associated benefits of local reductions at facilities that are often located in poor neighborhoods. They also draw a link between international offset projects that have been mismanaged to the detriment of indigenous groups and the potential effects of offsets on poor communities of color within California.

"Low-income, black folks, brown folks, Asian folks: A.B. 32 is a promise to reduce this pollution that we’ve been dealing with and trying to solve for decades," said Mari Rose Taruc, co-chairwoman of the ARB’s Environmental Justice Advisory Committee, at the Yale debate. "The way the environmental justice movement has framed these issues is a confluence of environmental, economic and social issues that have been around and that we’ve been dealing with for several hundred years."

Other groups like Friends of the Earth oppose offsets because, they say, they actually shortchange the value of protecting the forests.

"If California does have this ‘California effect’ whereby people will follow California’s lead, we see it as being a real threat to future generations if something so ineffective as pollution trading can be repeatedly presented as a viable way for us to respond to the climate crisis," said Gary Hughes, Friends of the Earth’s senior California advocate.

Both supporters and detractors of offsets agree that tropical countries’ potential contribution to the fight against climate change is immense. The members of the Governors’ Climate and Forests Task Force have reduced or avoided about 4 billion tons of carbon dioxide emissions — roughly the equivalent of California’s total capped emissions between 2006 and 2014. But political will is flagging due to a lack of financing mechanisms, according to Daniel Nepstad, executive director of the Earth Innovation Institute, a San Francisco group that advocates for climate-friendly rural development.

If California were to accept offsets from the two task force members that have statewide carbon forestry programs — Acre and Mato Grosso, Brazil — it could double or triple California’s emissions reductions, Nepstad estimated. It could then initiate a "domino effect" as more governments contemplate carbon-reduction mechanisms, he said.

"China is in California almost every month looking at climate policy as it prepares to launch its climate policy nationally by the end of 2018," he said. "If China were to build in a similar mechanism, suddenly we have a serious, positive signal to these politically courageous governors who stuck their necks out and risked losing elections, that what they’re doing matters. Because what they’ve already done is bigger than any other industrialized nation in the world. Putting this into place would increase the chances that we keep the planet below 2 degrees [Celsius in temperature rise]; it’s as simple as that."

‘We’re not there yet’

Back at the meeting with Corey, the Brazilian delegates are trying to figure out how close Californians might be to supporting their forest preservation projects. Twenty minutes into the discussion, after an overview of California’s suite of emissions-reducing policies, they cut to the chase.

"We know that you are making a big effort in reducing your own emissions," Lima says, "but we know that there were some discussions concerning possibilities of compensating emissions in other sectors, and we would like to know how advanced it is."

Corey says the tensions within California require additional outreach. "Sometimes things take longer than you want because of this, but you end up with a better outcome and a more supportable outcome."

In July, ARB released proposed amendments to the cap-and-trade program, but they did not include a proposal to accept offsets from Acre, as had been expected after the agency held several workshops exploring the possibility (ClimateWire, July 13). ARB plans to conduct more workshops starting this fall, with an eye toward accepting "sector-based" offsets in time for the third compliance period of California’s market, which begins in 2018.

Corey urges them to participate in the upcoming workshops. "If you can participate, I think that’s very helpful. If there’s misunderstandings, misinformation, speaking to that with facts and documentation is really helpful."

Afterward, the Brazilians digest the news and contemplate their next steps. "People were obviously a bit disappointed," one of the delegates says. "The Brazilian states have been engaged in the debate for so long. You get tired after a while."

Brazil’s federal government has not been open to letting states sell their emissions reductions because it wants to be able to count the reductions toward a national target, which is currently 43 percent below 2005 levels by 2030. But if there were a willing buyer, states could use that to put pressure on the federal government.

"It’d be very important to have a foreign jurisdiction who is willing to buy credits," the delegate says. "At the moment, [governors] are not willing to pick a fight, because no one’s buying it."

Cultural differences aside, the delegates absorb Corey’s message of looking beyond cap and trade to California’s other policies. "After lunch, they thought about clean vehicles and fuels," says the delegate. "We have a huge potential for biofuels."