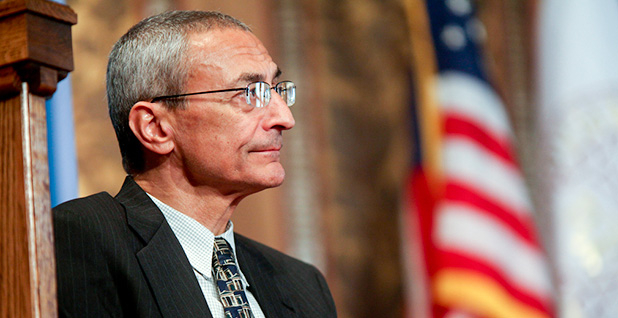 As top Democratic operative John Podesta's hacked emails continue to trickle out, will his reputation take a hit? Photo courtesy of Center for American Progress.

John Podesta probably would have done some things differently if he had known years of his personal emails would be dumped on the internet for all to see.

He might not have referred to one prominent Latino politician as having "baggage" or another being "a dick." And he might not have accused megadonor Tom Steyer of having "fucked" the Hillary Clinton campaign with a newspaper interview, or urged Steyer to encourage protests against a law professor fighting an Obama administration climate rule.

Will these embarrassing emails cause the environmental behemoth and Democratic demigod to take a big hit to his reputation and job prospects?

Probably not — in the long run — energy insiders and political experts say.

"I think it blows over," said Elgie Holstein, senior director for strategic planning at the Environmental Defense Fund, who worked with Podesta on the 2008 Obama transition.

"Anybody who has been around Washington or politics for a while knows that there are tough times and tough days and tough calls that have to be made from time to time, and I don’t think any of us would be totally comfortable with the idea of our entire email history laid out for the world to see," Holstein added.

"People in politics and government have come to respect him over many years of hard work and tough campaigns. I think one of the things that people know about him is not only that he’s very good at what he does but also that underlying it all is a true commitment to progressive politics and policy."

Podesta and the Clinton campaign haven’t verified the authenticity of the emails, and Podesta and the Obama administration have blamed the Russian government for hacking the emails in an effort to sway U.S. elections.

Meanwhile, Podesta has been apologizing behind the scenes, and some of the subjects of the more insulting emails have come to his defense.

Federico Peña, the former Energy secretary to whom Podesta referred as a "Needy Latino" with "baggage," said he received an apology from Podesta after the remarks surfaced and that he wasn’t insulted (Greenwire, Oct. 18).

In that same email, Podesta wrote that another former Energy chief, Bill Richardson, "can be a dick." Richardson said last week in a statement, "I do not care about any characterization of me made in an email. I have worked with John Podesta for many years and am neither concerned nor unhappy about this email repartee."

A former Obama administration official said Podesta may have ruffled "a few important feathers," but "John has been around for a long time, and he knows how to manage relationships in the political world." That person added that Podesta is a "hard-charging guy by reputation" who "knows that you have to push to get things done. … I don’t see anything in here that casts any doubt on his integrity or his honesty or the sincerity of his policy views."

Podesta has run in top Democratic and environmental circles for decades. He was a trial attorney in the Justice Department’s Environment and Natural Resources Division, and he worked for George McGovern’s failed 1972 presidential bid. He did a stint on Capitol Hill, founded a lobbying firm with his brother, and was President Bill Clinton’s chief of staff in the White House. He also founded the left-wing Center for American Progress and served as President Obama’s transition co-chairman and counselor before becoming Hillary Clinton’s campaign chairman.

"I don’t think it’s going to change his career options at all," said Chris Miller, a former longtime Democratic Senate staffer. "Assuming we’re talking about President Clinton, they have a very strong bond that goes way, way back, and I think that most, at least Democrats anyway, know that his heart is in the right place."

Miller added, "Politics can be kind of messy along the way."

Some Washington, D.C., insiders think Podesta will feel the impact for a while.

"I think it takes the shine off of his leadership, his reputation for outstanding leadership, because you’re pulling back the curtains on the Wizard of Oz," said Ron Bonjean, a Republican strategist and former House and Senate communications aide. Podesta "looks like much more of a political operative than a high-minded, thoughtful leader that he is made out to be."

Bonjean said he was most surprised by the "friend-on-friend violence" in the emails. "It’s just not smart to put those things in emails in the first place."

"I don’t see how it could. He’s been around Washington for a long time," he said.

It’s unclear what kind of role Podesta might be seeking in a Clinton administration if she wins the White House. He’s been rumored as a possible contender for Cabinet-level posts, although it’s unclear whether he would prefer the kind of behind-the-scenes role he’s had in the Bill Clinton and Obama administrations.

If he is nominated for a Cabinet post, the vast content of his emails would almost certainly become a hurdle during Senate confirmation hearings. Then again, he may not want work in the administration at all.

"If he suddenly decided that he wanted to ride roller coasters around the world — something he’s already done a lot of — it wouldn’t surprise me," Holstein said. "If he wanted to be on a climate change research ship to Antarctica, it wouldn’t surprise me. I don’t think people should assume that John is going to tread a predictable path, because he has so many paths open to him, undiminished by these emails."

At the same time, Holstein said, "People have to understand this is the way the world works. It isn’t always wine and roses."