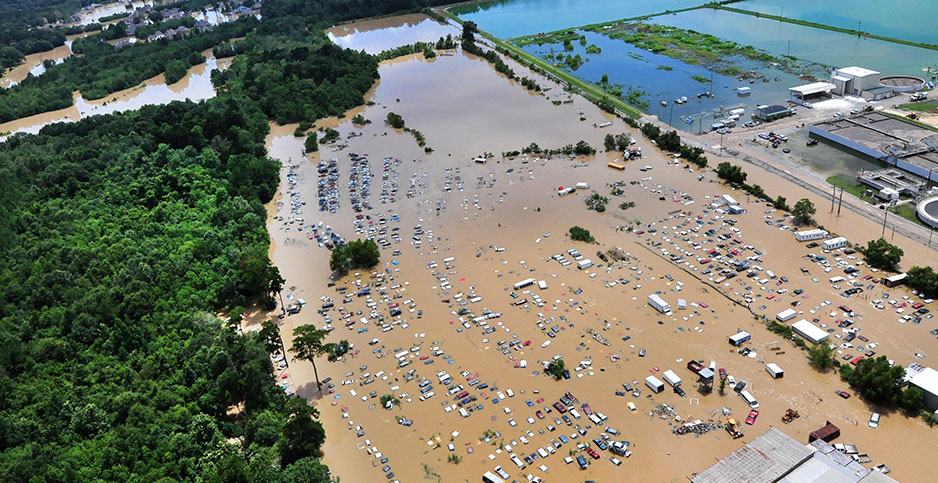 Roy E. Wright knows the perilous intersection between climate change and the three-headed monster of poverty, race and housing.

It’s endemic in the small town of Richburg, S.C., about 50 miles south of Charlotte, N.C., where Wright works as president and CEO of the Insurance Institute for Business & Home Safety, a national research organization dedicated to constructing disaster-resilient houses and buildings.

Nearly 60% of Richburg’s residents are Black, according to census data, and nearly 30% are poor, double the South Carolina average.

Wright also wrestled with race, poverty and disasters in Washington, where he worked for the Federal Emergency Management Agency from 2007 to 2018. Most recently, he was chief executive of the National Flood Insurance Program and deputy associate administrator for insurance and mitigation.

Last week, when the House Select Committee on the Climate Crisis released its report stressing climate change’s disproportionate effects on low-income Americans and communities of color, the former FEMA insider spoke boldly about its findings. He said the document "demands a focus now on serving minority and low-income communities to strengthen homes and better prepare for climate change."

E&E News caught up with Wright two days later in a telephone interview.

You said climate adaptation is "a humanitarian obligation." What does that mean for IBHS and the broader building industry?

I stand entirely behind that statement. For too many people who live in low-income or vulnerable communities, resilience is neither available nor affordable. Early this year I was in Alabama where we were looking at a fortified-roof designation on a house that had been done by Habitat for Humanity. As I sat there with the homeowner, he told me this story:

He’d always known his roof leaked every time it rained. If he wasn’t already home when it started raining, he got home quickly because there were a whole set of places around the house where he needed to put buckets, even in the middle of the dining room. What was so striking is when we talked about his new fortified roof, he said, "Buckets are for outside now." It’s in that moment that you see the vulnerability that’s in that place.

Did you have a sense that that man and others in similar situations identify with the concept of climate resilience or adaptation? To what extent do these terms we use so regularly now in policy circles translate in low-income minority and disadvantaged communities?

What does industry research say about impacts being more acutely felt in low-income, minority and disadvantaged neighborhoods?

At FEMA, I was party to a lot of the work that was done in that space. Take a hurricane, we imagine vacation homes that are right on the coast. But the normal part of that community is often just a couple of miles inland. The service workers who support vacation destinations are just a little ways in, and they’re living in homes built 30, 50, 70 years ago. Those homes weren’t built to withstand the kind of [climate] events they’re seeing right now.

As I get into the Heartland, we see this kind of extreme flooding a lot. The low-lying land is the less valuable property, and all too often that’s where low-income housing has been constructed. Tornadoes and high-wind events are also no respecter of economic status. They just come. Yet they can have a profound and devastating effect on communities with manufactured homes that haven’t been anchored properly or where the roofs can just blow off.

Can you cite a particular climate event that illustrated that disparity?

The people with means are the first ones to get out of the way. They often have other places to go and live. When I go into disaster-stricken areas, the normal middle-class folks are everywhere because it’s their only home. They’re the ones who are mucking out their house, whether that’s because the flood came through their front door or the roof was compromised and came in up top.

They’re the ones that are dragging their couches out and pulling up carpets to guard against mold. All too often, they’re trying to make the place livable as quickly as possible. They don’t have anywhere else to go. That’s been true in every disaster I’ve gone to.

Arguably the greatest impact faced by disadvantaged communities is flooding. Experts say the first thing to do is get flood insurance. Can you cite one non-insurance strategy to reduce flood risk for low-income and minority communities?

I’ll have to disappoint you on that front. Whereas on wind and rain, as well as wildfire, we have a whole suite of tools that we can deploy, when it comes to flooding … there are only three things you can do: You can get out of the way, you can go higher and stronger, or you can do infrastructure to redirect water. That’s it.

So getting out of the way often means sacrificing your home, the biggest financial asset you have. That’s impractical to almost everyone. Higher and stronger, clearly we’ve got ways with new construction to address that. But on the retrofit side, elevations are always in the six-digit range on cost. And you can look at drainage projects and other ways to divert the water, but those are hundreds of thousands and millions of dollars and require a community to take them on. Short of those solutions, the only thing you can do is transfer that risk through an insurance policy.

Does that essentially result in low-income and other disadvantaged communities simply being stuck?

How do you climate-proof homes in neighborhoods where housing is older, often in poorer condition, and where many homes are rental properties?

How do you bend the risk curve down? You start with the roof. There are a couple of very simple things you can do to seal the roof deck and lock in those shingles against wind and rain. The average cost to seal your roof deck is $500. That is the kind of thing that I believe is within reach.

Maybe that isn’t within reach for people in severe poverty?

What I was describing was something that might be available to a middle-class person with a mortgage on their home. Most low-income citizens are renters, so they’re dependent on landlords that may not be giving resilience and protection of that property the appropriate amount of attention.

On the other side, renters insurance for contents is much cheaper. But even there, you’ve got to come up with a couple of hundred dollars on a recurring basis, which is a financial strain. That’s the place where we need to lean on landlords and property owners to do the right thing. We’ve got to look at how [the Department of Housing and Urban Development] approaches their Section 8 housing to make sure the homes and apartments they’re living in will be able to withstand the knowable severe weather that’s coming at them.

Studies show that stronger building codes are an effective way of improving climate resilience. But many communities are not eager to strengthen or enforce building codes because they get pressure from developers and others who say they make homes more expensive. Is that a real problem or a red herring?

It is a real problem. It varies from state to state and community to community, but there are homebuilders that are advocates for increased building codes. It’s not fair to generalize them all in that space.

I will tell you the fastest way to get a developer to upgrade some part of a house — whether it’s the granite in the kitchen or bathroom, or it’s the elements of the building code that make it more disaster resilient — is when the market calls for it. When people who are buying those new homes demand something, it gets done.

Secondly, resilience doesn’t need to be more expensive. Oftentimes it’s about material selection or quality assurance at the point of installation. Those things may be called for in the code, but they don’t have to cost more money.

You mentioned that developers will always give people what they’re willing to pay for. When it comes to public housing and rental housing, what if someone says just build it as cheaply as you can?

So this is a place … where HUD must lean in and ensure that if there is government support or subsidy going to those structures to pay for them, we absolutely must demand they are built in a way that they can withstand what we know is coming their way. HUD has taken steps in this direction, and there are more that they can take.

We may be headed for a prolonged recession due to the COVID-19 pandemic. If that happens, how do we help poor and vulnerable people make the choice to keep their flood insurance?

You’re pointing at one of the most difficult issues in the disaster space. I would point to a study FEMA did on the affordability of flood insurance that was issued in early 2018. People need help. There are many people who have hard choices to make, and there are significant groups of people who just don’t have the means, whether it’s flood insurance or other property insurance.

It’s really hard, and you have to be careful about what you’re incentivizing. What is unacceptable is that we leave vulnerable families in a position that after Mother Nature blows through they’ve lost everything.

This interview was edited for length and clarity.