He lost badly to Eliot Spitzer. Now he’s in Congress 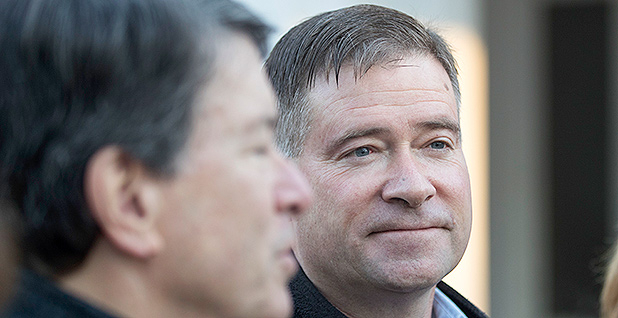 (From left) Freshman New York Rep. John Faso (R) was joined at his polling place on Election Day by the man he was hoping to replace, Rep. Chris Gibson (R). Photo by Mike Groll, courtesy of AP Images.

When congressional Republicans were weighing abortion restrictions as part of their plan to repeal Obamacare, an anti-abortion freshman from upstate New York delivered a message many probably didn’t want to hear: Don’t do it.

That was Rep. John Faso (R-N.Y.), who’s new to Congress but not to politics; he was a longtime member of the New York State Assembly, once served as its minority leader, and ran serious but long-shot campaigns for state comptroller and governor — the latter against Eliot Spitzer. Attacking abortion in the Affordable Care Act would be a political mistake, he said in a secretly recorded meeting of Republican members of the House, which was leaked to journalists.

Faso’s cautious take on the issue could be an early sign that he’ll emerge as a voice of moderation in a House GOP planted solidly on the ideological right — a role his predecessor, Rep. Chris Gibson, came to embrace before leaving Congress after three terms. Gibson became the leading Republican prodding his fellow GOP House members to address climate change.

"My aim is to be a productive member of Congress," Faso said in an interview. "I’ve been around long enough to know that one side doesn’t have all the answers."

On Obamacare, Faso was making the point that crafting a replacement for the health care law will be hard enough without injecting the politics of abortion, although he doesn’t oppose passing restrictions separately. Faso told E&E News he worries that Republican leaders will try to shove a repeal and replacement through Congress without any Democratic support, risking the same backlash Democrats received when they rammed the Affordable Care Act through Congress in President Obama’s first term.

Faso is serving on the committees on Agriculture, Budget, and Transportation and Infrastructure. Those will give him a voice on the 2018 farm bill and the next highway bill, among other issues.

As a state lawmaker, Faso was reliably conservative and, at times, to the right of his party’s leadership, said John McEneny, a former Democratic state assemblyman from the Albany area who served with Faso for several years. But with President Trump proving a contentious figure even within Republican circles, McEneny said, "I wonder if he’s going to be a lockstep conservative, or be the new Gibson."

If Faso, 64, migrates toward the political center, he’ll be veering from his political past.

Faso grew up on Long Island, where his father was an electrician who worked as a church custodian after his television repair shop closed. His mother stayed at home to take care of him and his four siblings. Faso commuted by train to Archbishop Molloy High School in Queens, where, he said, he was taught "by a nun with a long ruler."

After high school, Faso went to college at the State University of New York, Brockport, near Rochester, then went on to law school at Georgetown University. He settled in 1983 in Kinderhook, N.Y., along the Hudson River — birthplace of former President Van Buren — where a longtime assemblyman was poised to retire. He still lives there, a few doors down from Gibson, with his wife, Mary Frances. They have a grown son and daughter.

Faso ran for the Assembly seat in 1986 and won. Over the next several years, he gradually rose in the ranks of the Republican minority, becoming ranking Republican on the Ways and Means Committee. There, he delved into the fine print of state budgets and served as the party’s attack dog against Democrats, McEneny said.

The two men were philosophical opposites, McEneny said, but had two things in common: They were members of the American-Irish Legislators Society, and they had small children. "We had a bit of bond there," he said.

Faso said he sees his time in Albany as a character-building experience.

"I definitely think that the cauldron of the Albany legislative process equipped me well to take on this challenge," Faso said.

"I wasn’t afraid to take on the establishment," Faso said, citing his support for charter schools and pension reform. "I wasn’t just a go along, get along kind of guy."

His campaign for governor, against Spitzer, in 2006 went nowhere but gained Faso statewide name recognition.

"It was a quixotic run at the time," said his running mate, Scott Vanderhoef, a former county executive in Rockland County, N.Y. Faso was constantly on the phone, trying to raise money, but any Republican faces an uphill climb gathering support in heavily Democratic New York City, Vanderhoef said. "We both knew it was a very tough one."

In a solid year for Democrats nationally, Spitzer beat Faso by 40 points.

People who’ve worked with Faso said he has a sharp eye for budgets, a knack for public speaking and a willingness to listen to opinions he doesn’t necessarily share.

"The reason he rose to minority leader was his ability to listen to people," Vanderhoef said. "He’s not an ideologue. He’s conservative in most areas, but he also has a strong ability to pull people together."

When Faso spoke out against Democrats’ policies, McEneny said, "John was always one of those that did so as a gentleman, even when he raised his voice."

The fight for the congressional seat last year was anything but cordial. When Gibson announced he was leaving Congress, Faso saw an opportunity to make up for a missed chance in 2009, when the party passed him over for then-state Assembly Minority Leader Jim Tedisco in a special election to fill the seat vacated by now-Sen. Kirsten Gillibrand (D-N.Y.). The district, which stretches from the northern reaches of the New York City media market to apple country and almost hits the Adirondack Mountains, has switched back and forth between Democratic and Republican representatives in the past decade.

Faso’s congressional campaign, and groups supporting it, cast his Democratic opponent, Zephyr Teachout, as a "zany" professor — she teaches law at Fordham University — and a "downstater," seizing on the upstate-downstate cultural and political divide. Faso called her an "ivory tower elitist," and the National Republican Congressional Committee ran an ad on his behalf showing a Teachout look-alike sitting at a desk behind a laptop computer with a Bernie Sanders bumper sticker, wearing Birkenstocks and wiggling her toes.

Teachout zeroed in on Faso’s work as a lobbyist in Albany, as well as his public relations work for a company proposing a natural gas line from hydraulic fracturing fields in Pennsylvania through the Catskill Mountains in upstate New York, which environmentalists said would destroy wetlands and clearcut hundreds of thousands of trees. And she criticized him for opposing the dredging of polychlorinated biphenyls (PCBs) from the Hudson River when he was Assembly minority leader — a position that put him at odds with Republican Gov. George Pataki.

Faso spent upward of $2.8 million on the campaign, according to Federal Election Commission records. Teachout spent in the neighborhood of $5 million.

From their first debate, though, Faso was a better candidate, said Alan Chartock, a former political science professor who’s hosted a New York-oriented political talk show on the public radio station WAMC/Northeast Public Radio in Albany for more than 30 years.

"He’s extremely articulate," Chartock said, recalling their meeting. "It was not a contest. He was much better than she was."

Whether Faso can hold on to the seat depends in part on voters’ reactions to Trump, said Nathan Gonzales, editor of Inside Elections in Washington. Trump won the district 51 percent to 44 percent, but Obama won it 52 percent to 46 percent in 2012, he said. "I don’t think we know yet how it’s going to be in 2018."

However a campaign unfolds, it’s not likely to be a lighthearted affair. That’s not how Faso works, associates say.

Even in leisure, Faso leans serious. He prefers books about history, he said, and his most recent favorite is "Dead Wake" by Erik Larson, about the sinking of the Lusitania.

But don’t buy him a book without asking first, Faso said. "I’ve found over the years that it’s best to state the book that you want rather than accept the book you don’t want to read."