Head-scratching at the White House as oil crash continues 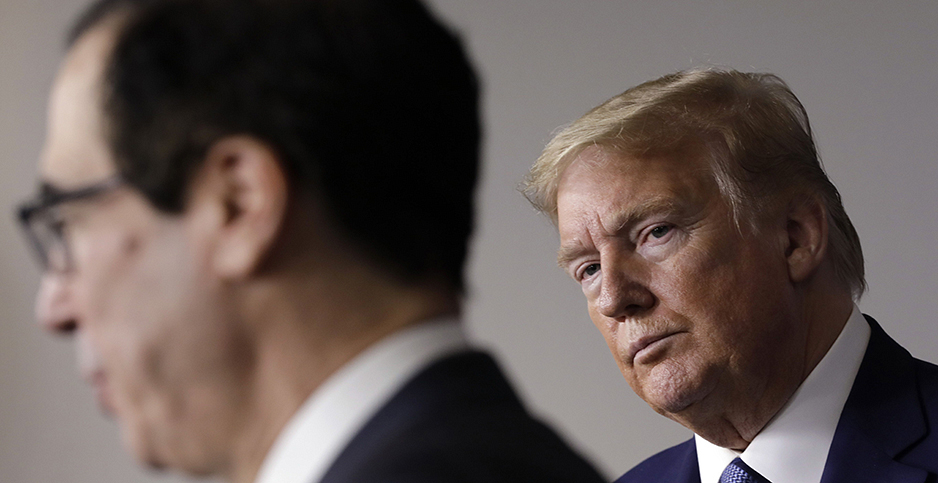 President Trump said yesterday that the "biggest thing in the tool box" for an oil industry reeling from an unprecedented price collapse would be reopening the country, as Treasury Secretary Steven Mnuchin suggested Congress may need to provide more money.

"That’s where the engine is, more important than any other thing that we can work on," Trump said at a White House briefing on the novel coronavirus pandemic that has closed much of the country. He has said he’d like to see parts of the nation open by May 1, and some governors are making plans.

Appearing with Trump, Mnuchin said the oil and gas industry likely does not qualify for aid under a $17 billion provision in the stimulus package that Congress has authorized for companies critical to national security, including major defense suppliers.

The energy industry has "national security issues, but different" from those that fall under the legislation, Mnuchin said.

"We may need to go back to Congress and get additional funding similar to the airplane or airline bill," he added. "The president has asked me to look at all of our options, and we’re doing that."

He said the department will look at its "existing capabilities."

Any assistance for the industry would be a heavy lift in Congress, where Democrats last month rejected the administration’s request for $3 billion in funding for oil purchases, labeling it as a "bailout" for the industry.

Earlier in the day, Trump, who a week ago boasted that a deal he helped clinch would save oil jobs, tweeted that his administration would "never let the great U.S. Oil and Gas Industry down." His comments came a day after West Texas Intermediate crude, the benchmark for most U.S. oil, fell 300%, trading at negative prices for the first time ever (Energywire, April 21).

But analysts say there’s little the government can do to help an industry awash in an excess of oil and zero demand because of travel restrictions aimed at combating the pandemic.

The White House has discussed purchasing excess oil, and Trump helped land a deal between Russia and Saudi Arabia to pull back global production. But prices are still falling, and Texas regulators balked yesterday at the idea of forcing production cuts.

White House chief economic adviser Larry Kudlow told reporters before the White House briefing that he expects a "tough quarter" for the industry with "lots of hardships, lots of difficulties."

He said the administration was looking at options, including storing more oil, but added that "there’s no easy, quick fix to this."

Energy Secretary Dan Brouillette, who hosted a call with House Republicans yesterday, also said on CNBC that "we want to make sure these guys are strong on the other end of this pandemic," adding that the industry underpins the entire U.S. economy.

Brouillette did not unveil any new plans but said the administration would be focused on ensuring that some of the borrowing programs that Congress and the Federal Reserve have set up to aid ailing industries are available to energy companies.

"We want to ensure that they’re not being discriminated against," Brouillette said, adding that he’s heard that some banks do not want to provide loans to the fossil fuel industry. "We want to make sure that that doesn’t happen."

Democrats had rejected earlier efforts to buy more oil for storage, but Brouillette told CNBC that the administration’s steps, including buying oil to fill up the Strategic Petroleum Reserve, make financial sense.

"In no way, shape or form are they bailouts," Brouillette said. "What we’re doing is making the nation stronger by filling up the strategic reserve at a time in which it makes economic sense to do so."

He said oil producers are awash in a glut of oil and face few storage options.

"If we can mitigate some of that immediate pain for this industry, then we should do so," he said. "It benefits the industry, yes, but it also benefits the nation and makes us more energy secure."

Brouillette said his department, too, has been flummoxed by the price plunge.

And he noted the administration may work with Congress to expand the country’s strategic reserve capacity, which is now at 1 billion barrels.

A spokesman for the House Energy and Commerce Committee noted that Brouillette offered on a call yesterday with lawmakers to work with Congress on modernizing the strategic reserve.

Under Oregon Rep. Greg Walden, the ranking Republican on the committee, "Republicans are working with DOE on this front," the spokesman said.

The Independent Petroleum Association of America is asking Federal Reserve Chairman Jerome Powell for flexibility under a lending program created earlier this month to assist small and medium-size businesses affected by the pandemic.

Jennifer Pett, a spokeswoman for the trade group, said its efforts have been directed at ensuring that independent producers are treated fairly as "distressed businesses" in seeking access to the Economic Stabilization Fund, the Paycheck Protection Program and other financial support actions.

"Allowing the use of loans provided by the Main Street New Loan Facility to pay off outstanding debts coming due before this crisis subsides will be the bridge to recovery for businesses that would have otherwise been able to meet their debt obligations, were it not for the virus," the group’s April 15 letter says.

It says independent oil and gas producers aren’t seeking a "government handout" but a bridge to survive the economic disruption.

Bethany Aronhalt, a spokeswoman for the American Petroleum Institute, said access to liquidity from lenders is important to all industries.

"We appreciate the administration’s focus on addressing this and other supply chain challenges facing the natural gas and oil industry in an effort to ensure long-term U.S. economic competitiveness, support America’s energy workforce and maintain our national security," Aronhalt said in a statement.

The federal action came as regulators at the Railroad Commission of Texas delayed a decision yesterday on imposing prorationing.

Two companies that specialize in shale production, Pioneer Natural Resources Co. and Parsley Energy Inc., asked the commission to reinstate the system, which was last used in the 1970s. The idea has drawn sharp divisions among the state’s big oil producers, which oppose the idea, and small producers, which welcome it (Energywire, April 15).

Only one of the three commissioners, Ryan Sitton, said he was ready to impose prorationing. The state should order companies to cut production 20%, or roughly 1 million barrels a day statewide, until worldwide oil demand recovers, he said.

"I don’t believe inaction on our part is acceptable," he said.

Commission Chairman Wayne Christian said he wanted more information before imposing production cuts. He asked the agency staff to compile data about pipeline, refinery and storage capacity in Texas, and announced that a blue-ribbon commission will look for ways to aid the oil industry.

Commissioner Christi Craddick said she wanted the state attorney general to determine if prorationing can still be done legally in Texas.

"Litigation for the next four to six years doesn’t help anyone if we don’t do this right," she said.

Christian said he’s spoken to regulators in Canada who’ve imposed prorationing and two other U.S. states that are discussing the idea.

In Oklahoma, the state Corporation Commission is scheduled to hold a hearing next month on cutting production after getting a request from some of the state’s small oil producers.

In North Dakota, Gov. Doug Burgum (R) and other members of the state Industrial Commission discussed the idea of prorationing yesterday but decided it "was not the right direction in the immediate short term," Katie Haarsager, a spokeswoman for the state Department of Mineral Resources, said in an email.

The state is planning a hearing to discuss the definition of "waste" in North Dakota’s oil field, Haarsager said. That’s a key term because most state prorationing laws were written to prevent wasteful overproduction.

While the Energy Department can’t get involved in the discussions, Brouillette said on CNBC that individual states might work with each other or through the Interstate Oil and Gas Compact Commission. But he said they could only go so far acting together.

"Whether or not they can actually collude to set a price, that’s a pretty gray area, a pretty murky area," Brouillette said. "It’s not something that I think most Americans would want to see occur here in the United States."

The coronavirus has cut worldwide oil demand by as much as one-third, or more than 30 million barrels a day. At the same time, Saudi Arabia, Russia and other nations actually began pumping more oil at the beginning of March after talks about production cuts broke down. They agreed on April 12 to trim production.

Oil and gas companies have already announced billions of dollars in spending cuts and thousands of employee layoffs. Analysts expect more drastic cuts will follow, and an increasing number of companies will go bankrupt if oil prices stay depressed for an extended time.

The negative oil prices that occurred this week only applied to a small slice of the oil market — West Texas Intermediate crude scheduled to be delivered in May — and bounced back to more than $12 a barrel yesterday. But there were signs that the problem was spreading. The price of WTI for June delivery also fell by about one-third yesterday to a little more than $13 a barrel. And Brent, the international crude grade, fell more than one-fifth to less than $19 a barrel.