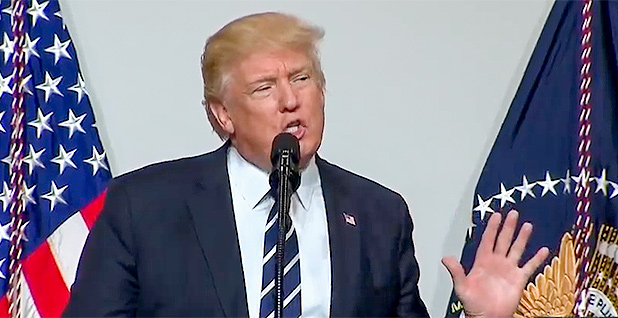 President Trump speaks at a National Republican Congressional Committee event this week. He talked about repealing the Affordable Care Act and other GOP agenda items. Photo courtesy of C-SPAN.

House Speaker Paul Ryan’s high-stakes gamble to force a vote on a health care rewrite later today will have consequences for tax overhaul and infrastructure legislation that are being closely followed by the energy and environmental communities.

President Trump and Republican backers are making the case to wayward GOP lawmakers that scrapping President Obama’s health care law will give them political momentum to move onto other bills like a tax code rewrite and infrastructure overhaul.

"Had no choice, had to go with the health care first," Trump told GOP lawmakers at a fundraising dinner Tuesday night. "Then we immediately start on the tax cuts, and they are going to be really fantastic and I am looking forward to that one. That one is going to be fun."

Trump also called on Congress to pass the "next great infrastructure bill" like those that moved under Presidents Eisenhower and Reagan.

Several lawmakers said Trump was even more direct at a House caucus meeting this week arguing that even if lawmakers don’t like the health care bill, backing it is a way to move on to potentially more popular tax reform and infrastructure measures. He also told the caucus that failing to unite shows an inability to govern that could cost them the majority in next year’s election.

For his part, Ryan (R-Wis.) has talked up the health care push as the first step in the Republican legislative agenda that also includes tax and infrastructure legislation.

"This is the first real test of are we going to do what we said we would do. It sets the stage for the balance of the year," said Rep. Fred Upton (R-Mich.), a senior member of the Energy and Commerce Committee, with close ties to House leaders.

Rep. Chris Collins (R-N.Y.), a Trump ally who sits on Energy and Commerce, calls the vote on health care the most important this Congress will cast. "If this goes down, we don’t get tax reform, we can’t move forward on infrastructure. We got nothing," he said.

Meanwhile, House Natural Resources Chairman Rob Bishop (R-Utah) said moving ahead on health care could boost cooperation on an infrastructure bill. He warned against a "doomsday scenario" if health care falters initially but conceded infrastructure would be delayed if the GOP needs to "regroup" on its plans for rewriting the Affordable Care Act.

Senate Energy and Natural Resources Chairwoman Lisa Murkowski (R-Alaska), one of a handful of GOP moderates who have expressed concern over the impact of the House health care bill on their home states, conceded yesterday that the political undercurrents that have hampered the health care push will continue.

"None of these things that we’ve taken up beginning this Congress have been easy things," she said. "You’ve got things that have political undertow, and we’re certainly seeing that play out."

Conservative opposition both on and off Capitol Hill is the biggest threat to GOP success with the health care legislation.

Rep. Paul Gosar (R-Ariz.), a senior member of the Natural Resources Committee — who skipped the caucus meeting with Trump to address the National Water Resources Association — said he does not buy arguments from the White House or fellow lawmakers that health care needs to pass now to clear the way for other legislation.

"I am tired of this place. You have to pass something because there is some little deadline? Do the right thing, have a transparent process," said Gosar, whose seniority on Natural Resources would give him a role in shaping an infrastructure bill.

Similar arguments are being made by the 40 or so members of the hard-right House Freedom Caucus, who if they stay united would have well over the 23 votes needed to defeat the health care plan.

The Freedom Caucus has been heavily lobbied by both the White House and House leaders to back the bill, even gaining some concessions that have helped pick up votes for the bill. If the dealmaking pays off, similar negotiations seem likely over tax or infrastructure legislation.

But Rep. Bill Flores (R-Texas), a former chairman of the House’s largest mainstream conservative caucus, the Republican Study Committee, warned that if the hard-right succeeds in blocking the health care bill, it could be emboldened.

"If they’re successful in doing it on this, they could take it as positive reinforcement and continue being problematic in the future," he said.

Conservatives are already raising concerns about an infrastructure package that could provide as much as $1 trillion over 10 years for roads, bridges and other infrastructure projects.

Rep. Mark Meadows (R-N.C.), the chairman of the Freedom Caucus who has spearheaded opposition to the health care bill, has said he would be unlikely to back a roads measure that would add billions in new spending.

Sen. James Lankford (R-Okla.), a fiscal hard-liner who sees infrastructure as a "uniquely government function," said the price tag will still be a factor for the legislative push, signaling conservative opposition may not be limited to the House.

"The fiscal issues are important," he said. "You can’t just do construction, add debt and assume that gets better."

Outside conservative opponents of the GOP health plan, including the Heritage Foundation and Club for Growth, are also testing their clout with the White House and majority in opposing the health care bill.

The Club for Growth is running television ads against backers of the bill, while Heritage has said it will count the health vote on its legislative scorecard used in determining which lawmakers they support.

Americans for Prosperity, the pro-fossil-fuel group aligned with the Koch brothers, also waded into the fight yesterday, saying it would spend millions of dollars to defend House Republicans who vote against the bill.

A defeat for the conservative groups on health care could diminish the clout they may have in blocking or influencing other GOP legislation.

Trump’s role may be the biggest question surrounding future legislation.

Republican leaders have taken to calling Trump "the closer" as he tries to lock up support for the GOP health care law repeal, one of his top campaign priorities. He has spent much of the past week meeting with a wide variety of House Republicans to build support and promising a rewrite in campaign-style rallies across the country.

If the legislation becomes law, the president is likely to get much of the credit and may be eager to play kingmaker on future bills. But if it fails, Trump may not have the political capital or willingness to work with lawmakers on other compromises.

Without White House input, House and Senate Republicans have a major divide to bridge on tax reform and lack a clear starting point on infrastructure.

The House GOP tax blueprint envisions raising $1 trillion over 10 years via a border adjustment tax (BAT) that would tax imports at 20 percent, while exports would be exempt. The BAT has raised concerns among refiners and retailers who say the proposal would simply tack 20 percent to the cost of imported goods that are sold in the United States, leading Senate Republicans to pan the proposed tax.

The White House said yesterday it would offer a tax proposal this year, but Trump has sent conflicting messages over the BAT. He has at times said it’s too complicated to implement, while at other times suggested taxing imports meshes with his push for boosting domestic businesses and creating jobs.

Rep. Devin Nunes (R-Calif.), a senior member of the Ways and Means Committee, welcomed a Trump role in a tax push. He said many GOP House members had never before worked with a Republican president and majorities in both chambers, so an early success with the White House could help build confidence for moving other major legislation.

Similarly, the administration has only hinted at an infrastructure plan that might mix federal dollars with tax credits to private companies that finance projects.

Neither the House nor the Senate has offered details on the scope of their infrastructure plans.