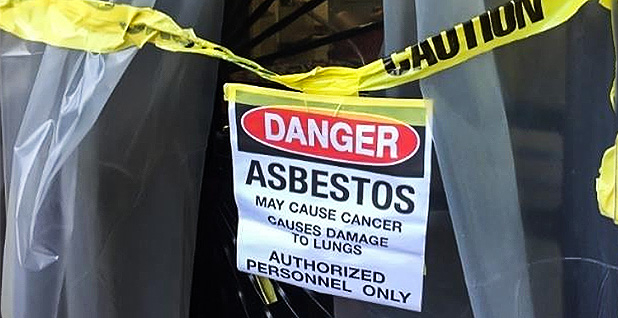 A sign warns of asbestos danger at a cleanup site. EPA

Environmental and public health groups announced today they are petitioning EPA to strengthen its regulation of asbestos and make more information about it available to the public.

The petition by the Asbestos Disease Awareness Organization and other groups calls for amendments to the Toxic Substances Control Act’s Chemical Data Reporting rule.

The groups want asbestos added to the rule. Under the change, importers and users of asbestos and related products would need to report on their activities. The petition also requests that those reports be available to the public. Asbestos has been banned in dozens of other countries, but it can still be legally used in the U.S.

After TSCA was amended in 2016, EPA chose asbestos as one of 10 chemicals that would undergo risk evaluations. ADAO’s legal counsel and former EPA Deputy Administrator Robert Sussman said they have concerns about the risk evaluation for asbestos.

"A big concern that we have is that we don’t think EPA has done an adequate job of identifying all the asbestos-containing products that are coming into the country and where those products are going and who is using them, what amount of asbestos they contain," Sussman said.

"They admit that they cannot quantify the asbestos imports that are coming into the country. That’s sort of a damning thing when they are attempting to do a risk evaluation," he added.

In its response, EPA said that "naturally occurring chemical substances" including asbestos aren’t subject to those reporting requirements. That interpretation effectively means no asbestos importers need to report on their activities, the petition explains.

"We are asking them to eliminate that exemption and loophole so that indeed there are reporting requirements for all asbestos imports and all asbestos uses. And we think that they need to move very quickly to do this so they can get the information expeditiously and use the information in their ongoing risk assessment," Sussman said.

An EPA aide said the agency "will review the petition and respond accordingly."

Since 2012, ADAO has been using Freedom of Information Act requests to find out who is importing and using asbestos, said Linda Reinstein, ADAO’s president and CEO. Her husband died of mesothelioma, a cancer that has been linked to asbestos exposure.

Mike Mattmuller was diagnosed with mesothelioma in 2011 when he was 29. He underwent surgery and other treatments, but the disease came back last year.

The experience has been "extremely traumatic" for him and his family, he said, while on Capitol Hill sharing his experience.

"It’s something I’m always going to have to live with," said Mattmuller. "When I found out that my disease was caused by something that shouldn’t be here, because of a man-made product, it’s just silly to me."

Under TSCA, EPA is required to respond to the petition within 90 days. A lack of a response or a rejection enables the petitioners to sue the agency.

Separately, a report released Monday by EPA’s inspector general found the agency’s lack of asbestos oversight in schools puts students and faculty at risk of exposure to the carcinogen. The report faulted budget cuts and a shift in priorities.

In its last year, the Obama administration had directed the EPA enforcement office to devote nearly all its chemical program resources to address lead poisoning (Greenwire, Sept. 17).

"We’re not done. This is a first step," Reinstein said.