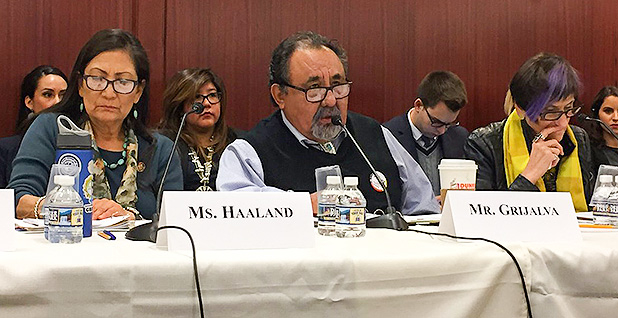 The nearly monthlong partial government shutdown is exacerbating the $11.6 billion deferred maintenance backlog in national parks, many of which remain open with a skeleton staff, according to congressional Democrats and former Interior officials.

"This shutdown is creating more havoc, more chaos, more harm in our park system, and we’re going to see it in our [wildlife] refuge system now, too," Rep. Betty McCollum, who is the chair-designate of the Interior, Environment and Related Agencies Appropriations Subcommittee, said yesterday.

Conservation groups that have lobbied for visitor fees to be used for the backlog are going to be "heartsick when they find out this shutdown is going to create even more backlog," the Minnesota Democrat told E&E News yesterday.

Acting Interior Secretary David Bernhardt earlier this month directed the National Park Service to use unspent money from entrance, camping and other visitor fees for basic operations, including collecting garbage and cleaning bathrooms, to help keep parks functioning during the shutdown (Greenwire, Jan. 7).

While some Republicans, like Rep. Rob Bishop of Utah, have called Bernhardt’s move a reasonable one given the lapse in appropriations, Democrats and conservation groups have questioned the legality of the decision.

"Those fees are clearly designated for capital improvement projects; now they’re going to be used to clean toilets," she said during the public discussion. "This is no substitute for the [NPS] annual operating budget of $2.5 billion."

House and Senate Republicans as well as Democrats introduced bipartisan legislation in the last Congress to create a fund that would help Interior erase its multibillion-dollar maintenance backlog (E&E Daily, Aug. 2, 2018).

That legislation languished, but members of both parties have said they want to rekindle the bill in the 116th Congress.

Witnesses yesterday included representatives from Indian Country as well as former Interior officials. Among the latter were Jonathan Jarvis, who led NPS during the Obama administration, and Dan Ashe, former Fish and Wildlife Service director.

"By burning through these accounts for operations, our parks will not be able to use the funds to address the maintenance backlog or to improve the park for the visitor," Jarvis said.

Jarvis, now executive director at the Institute for Parks, People and Biodiversity at the University of California, Berkeley, said he made the decision to close all national parks during the 16-day government shutdown in 2013. He said that while it was painful for the "gateway communities" and visitors, it was a "principled" decision based on the agency’s statutory responsibilities.

Richard Ring, a 33-year NPS veteran who served as superintendent of several parks, including Everglades National Park, said the shutdown is further delaying other important work, such as preparing roads, trails and facilities for the busy 2019 summer season.

"Contracts for concessions and other contracted visitor services would be solicited and negotiated at this time each year, and the hiring process for seasonal employees would be underway," said Ring, an executive council member of the Coalition to Protect America’s National Parks. "When and if the shutdown ends, that interrupted work will begin, but much of it cannot be accomplished in the time remaining before the onset of the busy visitor season."

"The impact of an [Indian Health Service] shutdown is that already chronically underfunded facilities are forced to make extremely difficult decisions without any other options," said Kerry Hawk Lessard, executive director of Native American Lifelines for Baltimore and Boston, which provides health care and substance abuse treatment for urban Native Americans in those regions.

"Facilities will not be able to provide care to patients," said Hawk Lessard.

IHS programs serving Indian Country do not have any fiscal 2019 appropriations.

The funding for the Agriculture Department’s Food Distribution Program on Indian Reservations will run out by month’s end, which would impact approximately 100,000 tribal citizens, mostly children and the elderly, according to a letter sent earlier this month from Native American leaders to President Trump and congressional leaders.

Mary Greene Trottier, president of the National Association of Food Distribution Programs on Indian Reservations, told Democrats yesterday that "people are afraid that they will not be able to feed their families."

Trottier said during the 2013 government shutdown that Indian Tribal Organizations that administer the program were forced to shutter operations, leaving food "to rot in warehouses while our participants went without food."

Many Native Americans also work for the federal government and are among the furloughed employees, a double whammy, witnesses noted.

Members referred to yesterday’s discussion as the first hearing on the shutdown in the 116th Congress, but it was Democrats-only.

Bishop, the top Republican on the Natural Resources Committee, said he was not invited. The membership and organization of several House committees, including Natural Resources, has not been finalized yet.

Grijalva said he helped orchestrate yesterday’s public hearing "to highlight the humanity" of the shutdown as well as "our parks and public lands" that are "jeopardized" right now.

The Arizonan will hold a "forum" tomorrow with Democratic members of his panel on environmental and other impacts of Trump’s proposed border wall.

The shutdown has delayed committee work and organization, said McCollum. The Minnesota Democrat would like to get Bernhardt up to the Hill "shortly" to talk about the shutdown and its impacts on the department, she said, but did not have a specific time frame yet.

The shutdown "just needs to stop," McCollum said. "I know that people would like someone to have some kind of magic solution to make this go away, [but] it’s not going to go away until the Senate stands up and passes the bills that came out of the House and tells the president we all care about border security."

The House will vote today on a $12.1 billion disaster supplemental package, which includes an amendment to temporarily reopen the government until Feb. 8 (see related story). That stopgap spending provision likely will tank the bill in the Senate.