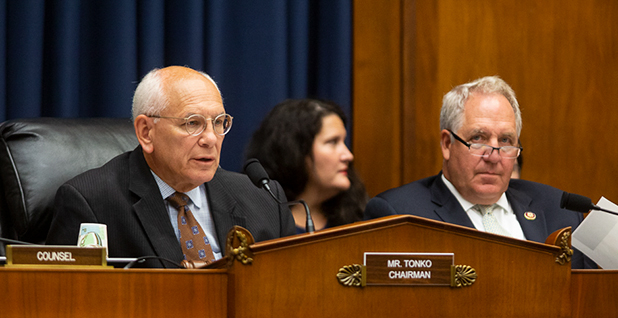 A day after House Energy and Commerce Democrats set a 2050 target to flatten greenhouse gas emissions, a kickoff hearing offered a refresher on the tortuous trek that lies ahead.

Taking the nation to "net-zero" greenhouse gas releases by that point is technologically feasible, witnesses told members of the E&C Subcommittee on Environment and Climate Change yesterday. But it will require a range of tactics that go beyond renewable energy sources, one said.

"Just like if you’re in Vegas, don’t put all your chips on one or two slots," said Karl Hausker, a climate specialist at the World Resources Institute, adding later that nuclear power should be in the mix.

Further down the witness table, Rachel Cleetus, a policy director at the Union of Concerned Scientists, stressed the need for "political will." On that front, the hearing underscored the entrenched fault lines between Democrats and Republicans.

There’s divergence, for example, on the future role of natural gas in the nation’s energy portfolio. And while Democrats highlighted the urgency of "decarbonization," Republicans pointed to evidence that China and other countries will remain wedded to coal and other fossil fuels for many years to come.

"I think we just have to have that in perspective," said Rep. John Shimkus (R-Ill.), the subcommittee’s ranking member.

The world as a whole must hit that mark to keep temperature rise under 1.5 degrees Celsius in comparison with preindustrial levels and stave off potentially catastrophic consequences, the panel said in the report released last October.

"We should be clear: This target requires nothing short of transforming the United States’ economy," subcommittee Chairman Paul Tonko (D-N.Y.) said at the hearing’s outset. With the help of government action, the outcome will be less pollution and millions of good-paying jobs, he added.

But Shimkus suggested the United States should focus on exporting low-emissions technologies to developing nations instead of attempting to remake its own $20 trillion economy.

"We should not put the United States at a competitive disadvantage," he said. Rep. Jeff Duncan (R-S.C.) later resorted to a visual aid: a slide of a diesel-powered van hauling a gasoline-powered generator that was charging an electric crossover vehicle.

"If we want to have more electrical vehicles on the road to lessen the carbon footprint, that electricity’s got to be produced somehow," Duncan said.

The hearing was the first in a series that E&C Democrats plan to hold in hopes of introducing a climate package by year’s end.

Little mentioned was the Trump administration’s refusal to acknowledge climate change as a critical threat. If there were any grounds for bipartisan optimism, they lay in the galloping growth of solar and wind generation and the potential of carbon capture and storage (CCS) to reduce emissions.

Once hydropower and nuclear energy are factored in, one-third of the U.S. electric grid is now carbon-free, said Armond Cohen, executive director of the Clean Air Task Force.

Although carbon capture technology is still in the early stages of deployment, "the U.S. is making significant strides to reduce costs and create" a robust industry that can contribute to decarbonization goals, said Shannon Angielski, executive director of the Carbon Utilization Research Council, an industry group.

The decline of coal as a fuel source has helped cut the power industry’s carbon emissions. But it’s been supplanted by the rapid growth in reliance on natural gas, another fossil fuel that could lead the United States to "completely blow past our climate goals," Cleetus said in response to questions from Rep. Frank Pallone (D-N.J.), chairman of the full Energy and Commerce Committee.

"Natural gas with CCS could be a contributor to a net-zero world," Cleetus added. "That’s the way in which we need to be leaning."

Rep. Buddy Carter (R-Ga.), noting that he has a gas turbine manufacturing plant in his district, seized on that point with Angielski, the one witness invited by Republicans.

"How much carbon-capture technology can we fit into the gas plant model?" Carter asked.

"There are a variety of different approaches that can be pursued," Angielski replied.

The hearing lasted almost 2 ½ hours. Asked afterward whether she’d heard anything new, Clarke described her takeaway as "a reaffirmation" of the urgency of confronting climate change.

The needed technology already exists, Clarke told reporters. "It’s the political will to really expedite it."