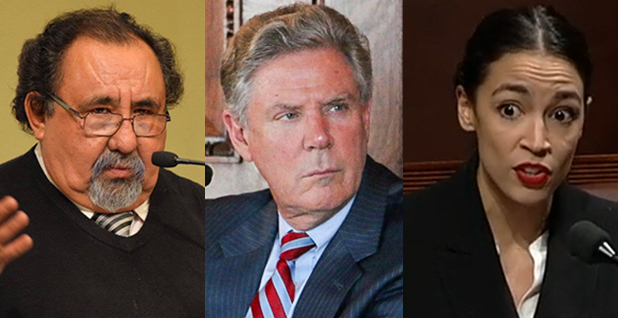 House Democrats will lay out their broad visions for tackling climate change this week with a pair of hearings and a mix of high-profile witnesses.

The Natural Resources Committee and Energy and Commerce Subcommittee on Environment and Climate Change will both kick off climate hearings at 10 a.m. Wednesday.

After House Republicans largely ignored climate change for nearly a decade, the meetings will mark the issue’s first formal moment in the sun in the 116th Congress.

And they’ll come with a hectic political backdrop. Since Democrats won the House in November, newly elected progressives have pushed the "Green New Deal" with a flurry of protests and events with advocacy groups on Capitol Hill.

That’s helped push climate change to the forefront of the Democratic agenda, with leadership and rank-and-file members alike talking up oversight hearings and looking to craft climate legislation in the run-up to the 2020 presidential election.

On Natural Resources, some of those new progressives will get a platform for their ideas on climate change.

Reps. Joe Neguse (D-Colo.) and Deb Haaland (D-N.M.) both sit on the panel, and both have been vocal backers of the Green New Deal, an ambitious set of proposals aimed at getting the U.S. to 100 percent renewables in just a decade.

The Energy and Commerce subcommittee, on the other hand, will have a more seasoned group of Democrats on the dais. Its chairman, Rep. Paul Tonko (D-N.Y.), has emerged as an important voice in working with leadership and big-name environmental groups to craft climate legislation (E&E Daily, Jan. 18).

Rep. Nanette Barragán (D-Calif.) is new to the subcommittee, as is Rep. Don McEachin (D-Va.), a leading congressional voice on environmental justice issues.

Republicans on both committees, meanwhile, have been mulling over how to respond to the onslaught of Democratic climate messaging.

"We will question the science when the science has areas by which we can question it," he said last month. "We also reiterate that there is a cost-benefit analysis to everything you do."

Rep. Fred Upton (R-Mich.), who doesn’t sit on the subcommittee but is a former chairman of the full committee, said Republicans on the panel are "just getting started" on sussing out where their caucus will land on the issue with the new Congress.

"We’re seeing where people are," he told E&E News last month. "I’m not a denier."

Natural Resources will bring in two panels of witnesses. The first, notably, will include Massachusetts Republican Gov. Charlie Baker, who will appear alongside North Carolina Gov. Roy Cooper (D).

The second will bring in a mix of witnesses from the environmental justice community, including the Rev. Lennox Yearwood, president of the Hip Hop Caucus, a grassroots advocacy group centered on hip-hop culture.

Kim Cobb, a professor at Georgia Tech’s School of Earth and Atmospheric Sciences, will also testify on the second panel.

Also this week, House leaders may finally release the names of lawmakers to sit on the new select panel on climate and Rep. Alexandria Ocasio-Cortez (D-N.Y.) is said to be preparing legislative language surrounding the Green New Deal.

Activists are planning to ramp up pressure, too. Several groups, including 350.org, Greenpeace and the Center for Biological Diversity, are holding events around the country in an effort to get congressional leaders to support the Green new Deal.