Heat wave death toll of 117 will rise with thorough count 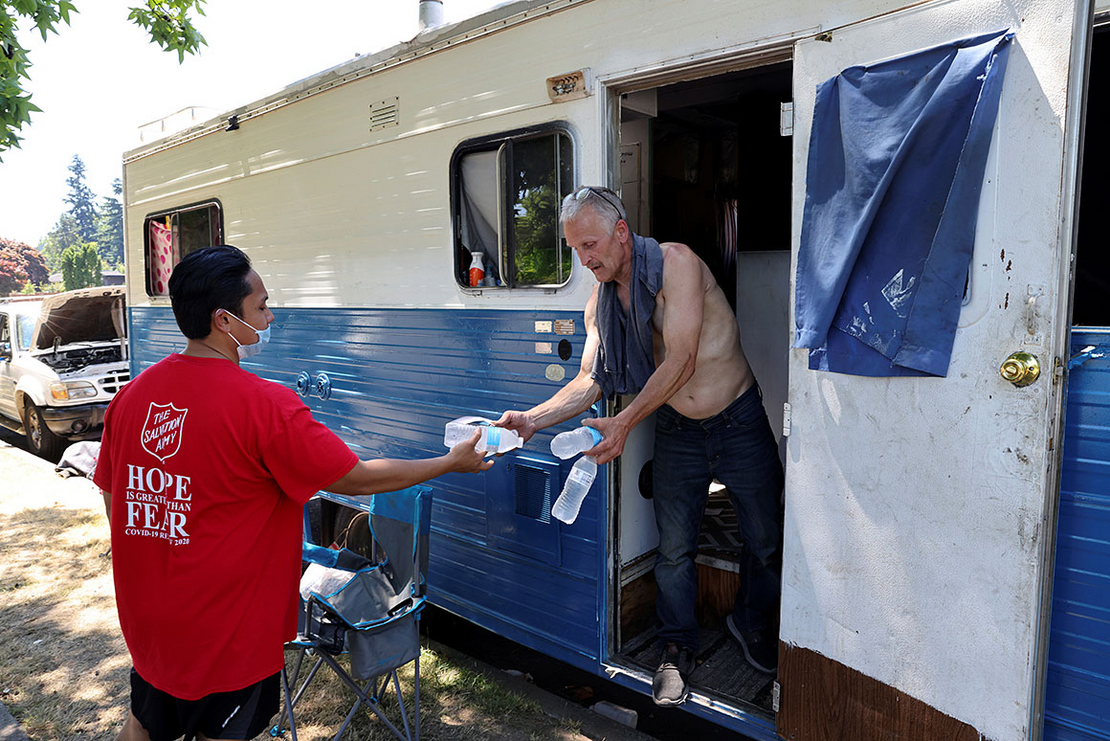 A volunteer delivers water to a man who lives in an RV near Seattle during last month's record heat wave. Karen Ducey/REUTERS/Newscom

When the Washington State Department of Health said this week that the recent heat wave in the Northwest had killed 117 people, many people missed an important word in the announcement.

The death tallies being released by state and county officials are early estimates based on records that the officials acknowledge typically undercount heat-related deaths. Because it can be difficult to determine the role of extreme heat in mortality, an official death count can be elusive and can take months or more to develop.

“I have no doubt that those numbers will increase over time,” Jaime Madrigano, a researcher at the Rand Corp., said yesterday. “It’s significant that we’re already seeing the large numbers.”

The death tolls reported so far are based only on deaths directly attributable to heat and where the cause is listed typically as hyperthermia.

“Often, it takes more time to tease out indirectly attributable heat deaths,” Madrigano said. “When the National Weather Service estimates heat deaths, their totals are based on deaths directly related to heat and come from death certificates that say the cause is heat exposure.”

The current estimates can miss deaths in which heat was a contributing factor to the immediate cause of death, which may be listed as cardiovascular disease or respiratory disease. Heat is known to aggravate both conditions.

“Heat is sometimes known as a silent killer. Unlike other natural disasters like hurricanes, there isn’t obvious damage,” Madrigano said.

When the Multnomah County, Ore., Medical Examiner’s Office released a report two weeks ago on deaths during a three-day heat wave in late June, the report said that 54 deaths had been “formally ruled” as having been due to hyperthermia. But the report cautioned that the “findings may change” as test results show other causes for the 54 deaths and as additional heat-related deaths are discovered.

The heat wave in the Portland, Ore., area lasted from June 25 through June 28, but 51 of the 54 deaths occurred on or after June 29. The report said a lack of air conditioning was “a key driver in mortality.” None of the people who died had a centralized cooling system at home, and only eight had a portable air conditioner.

The Washington Department of Health said in its recent report, “We are not reporting probable heat-related deaths,” and said that “more [heat-related] deaths will continue to get reported.”

Calculating a comprehensive death toll from the heat waves this summer will require the kind of analysis that health experts conducted after Hurricane Maria demolished Puerto Rico in 2017. The government of Puerto Rico initially reported that the hurricane had killed 64 people.

But the number was so small that university-based health researchers undertook their own analyses that compared the total number of deaths in Puerto Rico in the months after Hurricane Maria with the average number of deaths during the same time period in previous years. These “excess death” studies have estimated Maria’s death toll at between 1,100 and 4,600. The official count according to NOAA is 2,981.

“It’s important for researchers to look at statistics and to use the long-term average number of deaths to estimate excess deaths or excess hospitalizations,” Madrigano said.