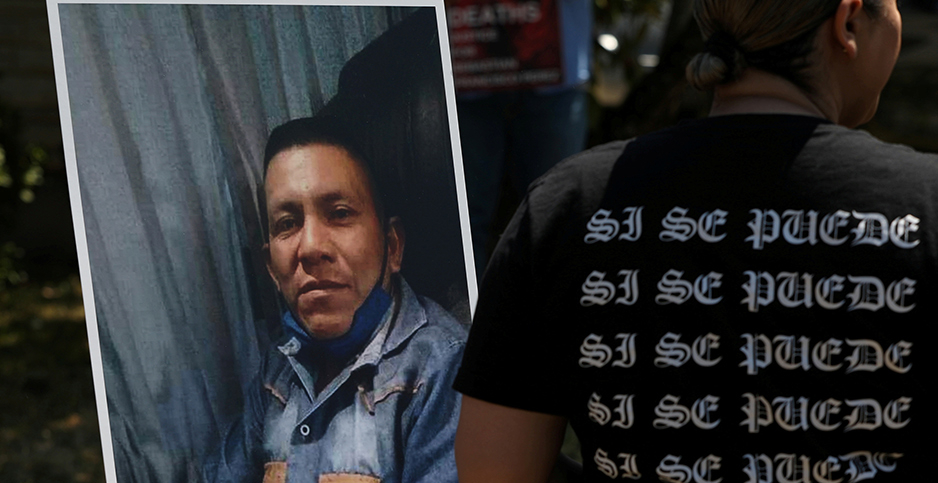 Mourners attend a vigil for Sebastian Francisco Perez, 38, who died in the heat wave last week while working in a farm field in Oregon. Alisha Jucevic/Reuters/Newscom

The blistering heat wave that scorched the Pacific Northwest last month would have been "virtually impossible" without the influence of climate change, scientists say. In fact, it was nearly impossible even with it.

That’s according to a new study from World Weather Attribution, a climate research initiative that investigates the influence of climate change on individual weather events.

"We’ve never seen a jump in record temperature like the one in this heat wave, as far as I can remember," said Geert Jan van Oldenborgh, a climate scientist at the Royal Netherlands Meteorological Institute and co-leader at World Weather Attribution, in a briefing yesterday.

The heat wave, which swept through Oregon, Washington state and western Canada in the final days of June, sent temperatures skyrocketing throughout the Pacific Northwest (Climatewire, June 28).

Seattle hit an all-time high at 108 degrees. Portland also broke a record at 116 degrees. And the tiny village of Lytton, in British Columbia, made international headlines when local temperatures soared to an eye-popping 121 degrees. Just days later, the village was all but consumed by a devastating wildfire.

Throughout the Pacific Northwest, hundreds of deaths have been attributed to the heat. Experts say many more additional fatalities are likely yet to be reported.

The new study, completed over the course of just 10 days, set out to quantify exactly how remarkable the event was. It concludes that the heat wave would have been, at the very least, 150 times less likely in a world without climate change — but potentially far more rare than that. The exact amount was difficult to quantify with models, in part because this event was so far outside the typical range.

"Basically, without climate change, this event would not have happened," said Friederike Otto, associate director of the Environmental Change Institute at the University of Oxford and a co-leader at World Weather Attribution.

In fact, the event hardly seemed possible even in today’s warming world.

Statistically speaking, there are upper limits to the kinds of temperatures scientists expect during heat waves. Those limits depend on the local climate, historical warming rates and the levels of extreme heat that have been observed in the past.

When the research team evaluated the Pacific Northwest heat wave using a standard statistical model — which uses past observations as a kind of benchmark for what should be possible — the model suggested that it should not have been able to happen at all.

The researchers ended up having to adjust their model, essentially forcing it to include the recent extreme temperatures in its historical record. Afterward, the model suggested that the heat wave was probably at least a 1-in-1,000-year event.

That number is highly uncertain, van Oldenborgh cautioned; it could be even more rare. The main takeaway is that the heat wave was outside the realm of anything the Pacific Northwest — and, in fact, much of the world — has ever experienced.

The team has several theories about how this event became so extreme, although more research will be needed to say for sure.

Drought could have made it worse than it otherwise would have been. Or changes in the flow of the jet stream, possibly influenced by climate change, might have played a role. It’s possible that the perfect storm of climate conditions simply lined up and allowed a highly unusual event to occur.

It’s also possible that the region has now "crossed a threshold" in which these kinds of events might become not only possible, but much more common, van Oldenborgh added. Climate change doesn’t always proceed in a linear fashion. The system can experience "’jumps’ that make this type of heat more likely once you pass a certain threshold," he said.

If that’s the case, these kinds of ultra-extreme heat waves could be in store more often than climate models currently predict — and they could start popping up in other unexpected places around the globe.

For now, it’s unclear what to expect. The team plans to delve further into the causes behind this event in the coming months.

"Everybody is really worried about the implications of these events," van Oldenborgh said. "This is something nobody saw coming, nobody thought possible. We feel we do not understand heat waves as well as we thought we did."

‘How climate change kills us’

A better understanding of the future — and better predictions about heat waves in the coming years — can save lives. As it is, many communities across the country and around the world may be underprepared for what’s to come.

Households in the Pacific Northwest, for instance, tend to have lower access to air conditioning than warmer parts of the country. That makes extreme heat waves even more dangerous when they occur.

"From the public health side, the most important point is almost all of the deaths are preventable," said Kristie Ebi, an expert on global warming and public health at the University of Washington, at yesterday’s briefing. "People don’t need to die in heat waves."

Climate models nearly unanimously project that heat waves will become more frequent and more intense as the world continues to warm, even if scientists are still unpacking the limits of those extremes. That means it’s essential for communities to develop emergency plans for extreme heat events and increase public awareness about the dangers, Ebi said.

Heat already kills more people in the U.S. than any other weather event, claiming hundreds of lives each year.

And attribution studies suggest that climate change is increasing the severity of heat waves more strongly than hurricanes, droughts or any other weather event. Its influence on extreme heat is "orders of magnitude" higher, Otto pointed out.