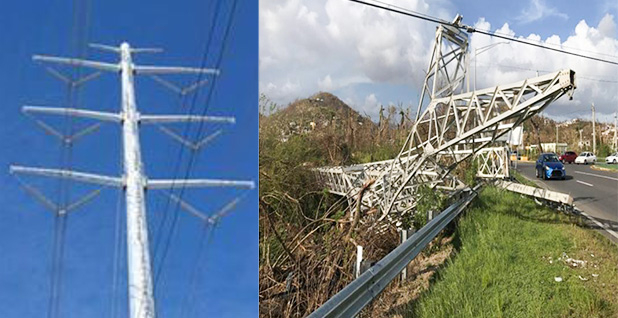 Single-tower steel transmission towers, known as monopoles, fared better in the hurricane than lattice towers, many of which were turned into twisted wreckage. New York Power Authority and Consolidated Edison Inc.

A consortium of government and industry groups yesterday unveiled a $17 billion plan for rebuilding Puerto Rico’s electricity system, one that would have the federal government involved for a decade to wean it off oil and make it a model for the age of superstorms.

The report demonstrated that while Puerto Rico’s recovery may have ebbed from the headlines, it is still very much on the mind of the U.S. electricity industry.

The damage wreaked by Hurricane Maria in September is by far the largest blackout in U.S. history, and as the recovery approaches the three-month mark, only 63 percent of the island’s electric service has returned.

"The magnitude of devastation to the Puerto Rico electric power system presents an unprecedented opportunity to rebuild and transform the system to one that is hardened, smarter, more efficient, cleaner, and less dependent on fossil fuel imports," said the report, by a self-named Puerto Rico Energy Resiliency Working Group.

The study’s arrival is timely. Congress is considering Puerto Rico’s request for $94 billion in recovery funds, and no part of that package is more important to the territory’s economic recovery than its electric grid.

In addition to a long list of measures to make power lines and substations more resistant to storms, the report envisions a Puerto Rico that is dotted with solar farms and supplemented by more than 150 microgrids — a vision that would not have been out of place under President Obama.

The report is an unusual collaboration between, on one hand, the federal Department of Energy and other nationwide energy groups, and on the other, some of the main utilities and energy agencies in New York state.

The report, called "Build Back Better," has among its authors DOE and three of its national laboratories: Pacific Northwest National Laboratory, Brookhaven National Laboratory and the National Renewable Energy Laboratory. Other participants are the Electric Power Research Institute and the Smart Electric Power Alliance, which represent large swaths of the energy industry, as well as Edison International, the parent company of Southern California Edison. The island’s bankrupt utility, the Puerto Rico Electric Power Authority, also endorsed the report.

The New York contingent has two compelling reasons to be involved: The state is home to more Puerto Ricans than any other, and after Superstorm Sandy in 2012, it has developed expertise in preparing for hurricanes.

The report is the first detailed look at Puerto Rico’s grid to emerge from the chaos that followed Maria. The basis is field reports of crews from NYPA and ConEd that have been on the ground since shortly after the storm passed.

It lays out in forensic detail what happened with the one-two punch of Hurricane Irma, which sideswiped the island in early September, followed by Hurricane Maria on Sept. 20.

"This system will deliver increased renewable energy resources, such as wind and solar; incorporate new distributed energy resource technologies, such as energy storage and microgrids; reduce the dependency on fossil fuels; and enable energy to become abundant, affordable, and sustainable to improve the way of life in the Commonwealth of Puerto Rico," the report reads.

The island’s energy infrastructure needs to be upgraded to withstand 155-mph winds, the report said, adding that it is unclear whether the U.S. Army Corps of Engineers, which is in charge of the grid rebuilding effort, is meeting that standard.

Here is an itemization of the group’s budget:

$4.9 billion for the transmission system

The island’s 2,400 miles of transmission lines showed major weaknesses, the report said; only 15 percent of the transmission lines were built for a Category 4 hurricane. The lattice towers that are the industry’s standard were twisted by Maria’s winds, and many toppled as the underlying ground turned to mud. The report recommended installing monopole towers, using stronger insulators, hardening against lightning and reinforcing foundations with concrete.

But the bigger change the report suggested is to relocate them.

Many of the transmission lines that cross the island’s mountain range were erected in the forest decades ago, before the highways were built, and after the storm were impossible to reach. The report recommended relocating them to run alongside highways and other major roads to make them more accessible, a project that would start construction in five years and end within the decade. In areas of especially high wind, lines would be buried underground.

$5.3 billion for the distribution system

Among the island’s 30,000 miles of distribution lines, 75 percent of the circuits needed repair, the report said. Many lines fell like dominoes as wooden poles snapped and concrete ones shattered. Many lines that already ran underground, mostly in the capital of San Juan, were damaged by water.

Many of the improvements to the distribution system could be done within the year and the entire upgrade in three years.

This encompasses a wide range of technologies, from solar power to batteries to microgrids, and the report stressed that every other part of the system needs to be built to accommodate them.

Solar and wind farms were heavily damaged by the hurricane, the report said. Nonetheless, it called for an expansion of Puerto Rico’s current 157 megawatts of solar, much of which is distributed across rooftops. The authors saw an opportunity in the 470,000 homes that were destroyed in Maria’s wrath; 20 percent should be rebuilt with a rooftop solar array.

But the bulk of the group’s attention was reserved for microgrids, which can provide electricity from local sources even if the larger grid is inert. They have been the subject of growing interest as the recovery has dragged on (Energywire, Dec. 8).

"A large-scale investment in microgrids can pave the way for a more resilient Puerto Rico," the report said, and "can create a series of self-powered, autonomous centers to help the local communities recover in the immediate aftermath of a storm."

It laid out a case for 159 microgrids, built at a cost of $1 billion. The little grids would power both critical sites, such as hospitals, fire stations and water treatment plants, as well as rural communities where it takes longest to restore power.

Specifically, it called for installing microgrids at 26 of the island’s 58 hospitals, at 20 fire stations and 20 police stations, at 75 shelters, and at 10 percent of wastewater and water treatment facilities. Furthermore, three rural communities would be equipped with microgrids that at least could power crucial buildings like police stations, hospitals and key businesses. For some towns, it added, the answer may be "permanent disconnection from the main PREPA grid."

The microgrids would be powered by some combination of solar photovoltaic panels, diesel generators, combined heat and power units, or batteries.

The effort, which would take five to 10 years, "will be a large undertaking," the report said.

The report concluded that 131 of the island’s 334 substations suffered major damage, and more than 90 percent of them need storm upgrades. They need fortification against flooding and winds. Others that are in floodplains or are more than 30 years old ought to be junked and replaced.

Nine of the island’s major power plants are in areas that could flood, the report said. While almost all of them are candidates for rehabilitation, it recommended closure for Palo Seco, the third-largest power plant on the island and the biggest in San Juan.