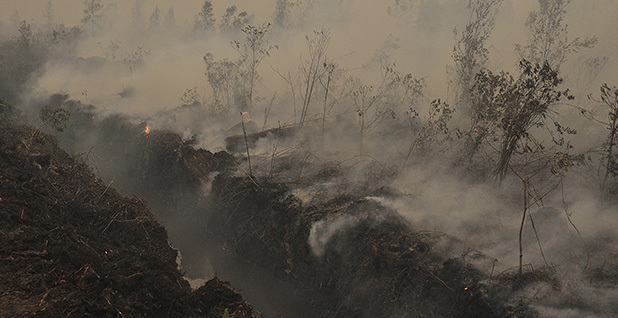 A billion tons of carbon emissions goes up with the smoke. Photo by Louis Verchot.

This year, more than 94,000 fires, most in carbon-rich peat lands, have engulfed the island nation of Indonesia, sending thick, acrid smoke into the air. The haze is affecting the health of millions of people there and in Malaysia and Singapore. It is also creating a diplomatic nightmare and enforcement problem for government officials.

In past years, monsoon rains have offered relief by naturally quelling the flames that are so hard to control in the spongy, dense peat forests, but new forecasts of this year’s strong El Niño event signal delayed rains and therefore no relief anytime soon.

During the last major El Niño in 1997-1998, fires in Indonesia raged for months into the "wet season" fueled by dry conditions and a delayed onset of the monsoons. Andrew Robertson, head of the climate group at the International Research Institute for Climate and Society at Columbia University, said its El Niño forecasts indicate one of the strongest El Niño events since 1950, and the terrible conditions that plagued the region in the ’90s could be happening again.

"What we’re seeing is this El Niño event is really quite exceptional," he said. "Where these fires are raging at the moment, they could continue to burn up to another month or so."

As a result, immense stores of carbon have been released by the fires into the atmosphere. So far, the fires have released an estimated 1 billion tons of CO2, about 3 percent of global fossil fuel emissions or more carbon than released by Germany in 2013, according to calculations by Guido van der Werf, a researcher at VU University Amsterdam.

"The emissions coming off these fires are huge, but still dwarfed by other emissions sources such as fossil fuels and the agricultural sector," he said in an email. "However, I do think we will see the impact of these fires on the global CO2 concentration, but in the end it is a minor source if you take the full picture into account. Everything is relative."

Relative or not, van der Werf thinks the country is about halfway through fire season. According to his calculations based on satellite data, emissions released from the fires are on a somewhat lower track than the devastating fire year of 1997, but tracking higher than 2006, the second-highest emissions year in recent history.

Louis Verchot, director of forests and environment research for the Center for International Forestry Research, is working with a team of researchers on the ground using an infrared spectrometer to measure the greenhouse gases coming off the peat. He said the firefighting effort looks inadequate. In one instance, he said, 30 military showed up to a 7,400-acre fire with three water pumps and a couple of hoses. Firefighters are digging ditches in the peatlands to reach more water, which then dries out the peat, making it more flammable.

Although the greenhouse gas emissions are significant, Verchot said the health and economic impacts to those in the region are immediately striking. In Central Kalimantan, some farmers he spoke with expressed concern that the haze is blocking sunlight and stunting vegetable yields.

"The smoke is really quite thick, and people are dealing with it without protection," he said. "Kids are running around without masks, and the masks out there are not good enough."

According to data from the Indonesian Health Ministry, more than 120,000 people have sought medical help because of the haze and smoke.

The soil is burning

Peat is a very dense fuel source, which means that it contributes to high levels of fire emissions that contribute to particulate matter in the air, Marlier said. That can be especially dangerous for the respiratory systems of the young, the elderly and those with compromised immune systems.

"We’re concerned about this because long-term studies have established that there is a relationship between annual exposure to fine particulate matter and cardiovascular and respiratory diseases and lung cancer in adults," Marlier said in an email. "There is also research showing that early-life exposure in the womb and after birth can contribute to infant mortality as well as negative health outcomes later in life."

Every year, Indonesia is plagued by peat fires, which are deliberately set in what is known as "slash-and-burn" in order to clear forests for agricultural use. Large plantations of palm oil and rubber are two of the biggest commodities.

"Keep in mind, though, that it takes both drought and humans to get these events, El Niño is by no means ‘guilty,’" van der Werf added.

The country’s neighbors, including wealthy Singapore, have lambasted Indonesian officials for their inability to control the outbreaks.

The response to the fires by the Indonesian government over the last few weeks has been robust, said Nigel Sizer, global director of the World Resources Institute’s Forests Program. Thousands of military personnel are on the ground fighting the fires, and in a 180-degree flip, Jokowi has accepted foreign firefighting support. Currently, water-carrying planes from Singapore, Malaysia and Australia have been deployed in an attempt to put out some of the worst fires in South Sumatra.

"There has been a massive effort going on to put out the fires," Sizer said. "The really big question — really, the huge question — is once the fires are put out or go out … will the government and the president simply move on and forget about this crisis or will they, for the first time, get really serious about preventing this from happening again?"

On a domestic level, Sizer said the immense health impacts from the haze may force the Jokowi administration to consider reprioritizing its agenda to put sustainable land-use issues to the forefront.

Or maybe not. Last week, Indonesia’s chief natural resources minister, Rizal Ramli, told Parliament that Indonesia together with Malaysia is backing a new palm oil producing group. The two countries, which produce about 85 percent of palm oil worldwide, have proposed the creation of the Council of Palm Oil Producing Countries. The intergovernmental group would push to replace "no deforestation" pledges with a set of jointly agreed-on sustainable forestry practices.

Over the last two years, mounting international pressure has contributed to many big palm oil companies signing on to "no deforestation" pledges.

Ramli argued these comprehensive pledges hurt small palm oil producers that may not have the resources to implement sustainable practices.

"We are the biggest palm oil producer," Ramli testified. "Why [should] the consumers from the developed countries set the standard for us as they want?"

The environmental group Greenpeace decried the decision. In a statement, Annisa Rahmawati, a forest campaigner with Greenpeace Southeast Asia, said economic concerns over small producers are being used as an excuse by the industry and the government to avoid ending the large-scale deforestation and peat drainage that is the root of the current fire crisis.

"If President Jokowi is serious about protecting his people and stopping the forest fires, he should stand with the progressive companies to ensure that the rest of the industry stop creating next year’s disaster," Rahmawati said.

Sizer said many small- and medium-sized palm oil producers were left out of international conversation on no-deforestation pledges that has swept through the industry. Among many others, one challenge moving forward, he said, will be to do a better job of engaging small palm oil stakeholders in order to continue moving away from deforestation, the underlying cause of the devastating fires and haze.

"If significant steps are not taken, there’s no reason to believe there wouldn’t be significant fires and haze again within six to 12 months," he added.