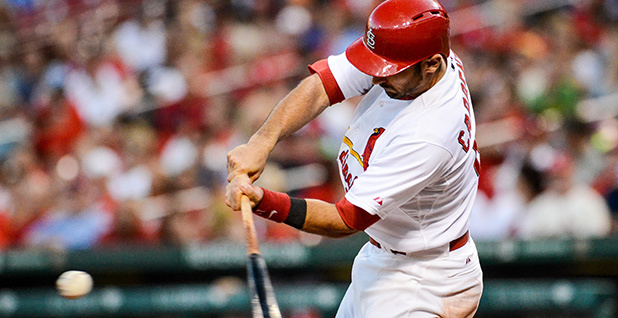 St. Louis Cardinals third baseman Matt Carpenter hits with a maple bat during the team's opening game Sunday against the Pittsburgh Pirates. Bats made of ash, the traditional first choice of many ballplayers, are becoming increasingly rare -- in part, scientists say, because an invasive beetle spurred on by climate change has been threatening ash supply. Photo courtesy of AP Images.

When St. Louis Cardinals third baseman Matt Carpenter picked up a bat for the 2016 baseball season opener Sunday against the Pittsburgh Pirates, he selected one made of maple.

These days, maple is the bat material of choice for most pros, and it has been ever since San Francisco Giants left fielder Barry Bonds broke the record for the number of home runs hit in a season. But scientists say that if ballplayers like Carpenter ever want to go back to traditional ash bats, they might not have that chance.

The supply of ash in the United States is under threat, and with it, the iconic Louisville Slugger. The culprit: an invasive beetle called the emerald ash borer.

"It is the most destructive invasive insect to have ever entered North America," said Therese Poland, a research entomologist with the U.S. Forest Service Northern Research Station.

First identified near Detroit in 2002, the invasive species today is found in 25 states and two Canadian provinces. It has killed hundreds of millions of ash trees and inflicted millions of dollars in damage. As global temperatures rise, the beetle is likely to not only survive in what was previously too cold of a climate, but it will develop from larva to adult in half the time, Poland said.

Furthermore, the beetle doesn’t discriminate in its attack of ash, but a drought-stressed tree is especially attractive, something that is projected to become more common as the climate changes.

About the size of a slivered almond, shiny and green like the jewel for which they’re named, adult emerald ash borers begin their barrage on ash trees innocently enough, by munching on the tree’s leaves. The real damage begins when females lay their eggs inside the cracks and crevices of tree bark. Once born, the larvae tunnel underneath the bark, devouring its tissue and preventing the tree from transporting water and nutrients. Within one to three years, the infected ash tree will be dead.

For more than 100 years, Louisville Slugger, the official bat of Major League Baseball, has sourced its white ash from a relatively small area of northern Pennsylvania and New York. About seven years ago, the bat maker noted that the beetle had come within 100 miles of its harvest site.

On its own, the emerald ash borer will not move more than a few miles. But humans have helped it spread, mainly through the seemingly innocent transportation of firewood from urban areas to forested ones.

"Ash trees are an enormous component of neighborhood trees," said Leigh Greenwood, the Nature Conservancy’s "Don’t Move Firewood" campaign manager. "When they get infested and die, it’s tempting for people who don’t know better to cut it down and take the wood hundreds of miles to a campsite, and it infects that campground."

Louisville Slugger agreed, Greenwood said, and tried to help by spreading that message on its website.

And maple bats may not be entirely safe. Another invasive insect, the Asian longhorned beetle, is now targeting maple trees, but in a slower manner, she said. Unlike with the emerald ash borer, scientists think they can eradicate the maple-eating bug.

"In short, the cat’s out of the bag with the emerald ash borer, which is really tragic, but it’s true," Greenwood said.

Wasps, girdling and the fight to save ash

The fight is far from over against the emerald ash borer. Poland, with the Forest Service, leads a research team that has tested multiple strategies to kill or slow down the spread of the beetle.

First, there are insecticides on the market that when injected into the tree will kill emerald ash borer larvae almost entirely, but it’s expensive and labor-intensive to treat individual trees.

"They’re useful for homeowners or cities to treat street trees, but at the forest level to go out to a woodlot and manually inject every single tree at a couple hundred dollars per tree, it’s not feasible," Poland said.

In 2008, the Forest Service received permission from U.S. EPA to begin releasing parasitic wasps from China that kill the beetle. The agency is monitoring areas where three species of wasps have been used to see what impact they are having on controlling beetle populations.

Because stressed trees are extra-attractive to the beetle, foresters can girdle a tree, or remove a band of bark in order to attract large numbers of the bug. The stressed tree becomes a tasty sentinel for the beetle. Once infested, the tree is cut down and chipped, destroying a chunk of the emerald ash borer population.

"If we didn’t do anything, it’s likely 100 percent of ash trees would die," Poland said. "By using some of [these] techniques, we’re hoping to give ash a chance."

As a backup plan, Major League Baseball and the Forest Service’s Forest Products Laboratory have also developed a protocol to bring new wood species into the fold for baseball bats.

In 2008, MLB approached the Forest Products Lab with a conundrum: Why were so many maple baseball bats breaking during games and sending dangerous shards of wood flying into stands?

In response, the lab and its partners figured out why, and then, to stop maple bats from injuring others, developed a set of criteria and tests that can be used to qualify a new species of wood for use as a baseball bat. Because of their long-standing use, the rate of bat breakage to meet or beat was set by rates measured in ash bats. The density of wood and the grading of the material, or how straight the wood fibers are, are part of those criteria.

David Kretschmann, research general engineer with the Forest Products Lab, who works on the baseball bat research, said two species have been approved for use in MLB bats so far. They are yellow birch, now used by about 5 percent of players, and European beech.

Kretschmann said he isn’t worried about the future of American’s pastime because the players have already moved away from ash.

"In reality, at this point, there’s still enough material out there for the demand that it [the emerald ash borer] doesn’t really have an impact," he said.

But Troy Weldy, director of land conservation for the Nature Conservancy in New York, sees it differently. Although bat makers may have already made a shift because of market forces, future generations could lose a piece of Americana if ash bats aren’t available.

"The 10-year-old baseball player who has aspirations to get to the majors, that is who is going to miss out if ash is not available in the future," he said.