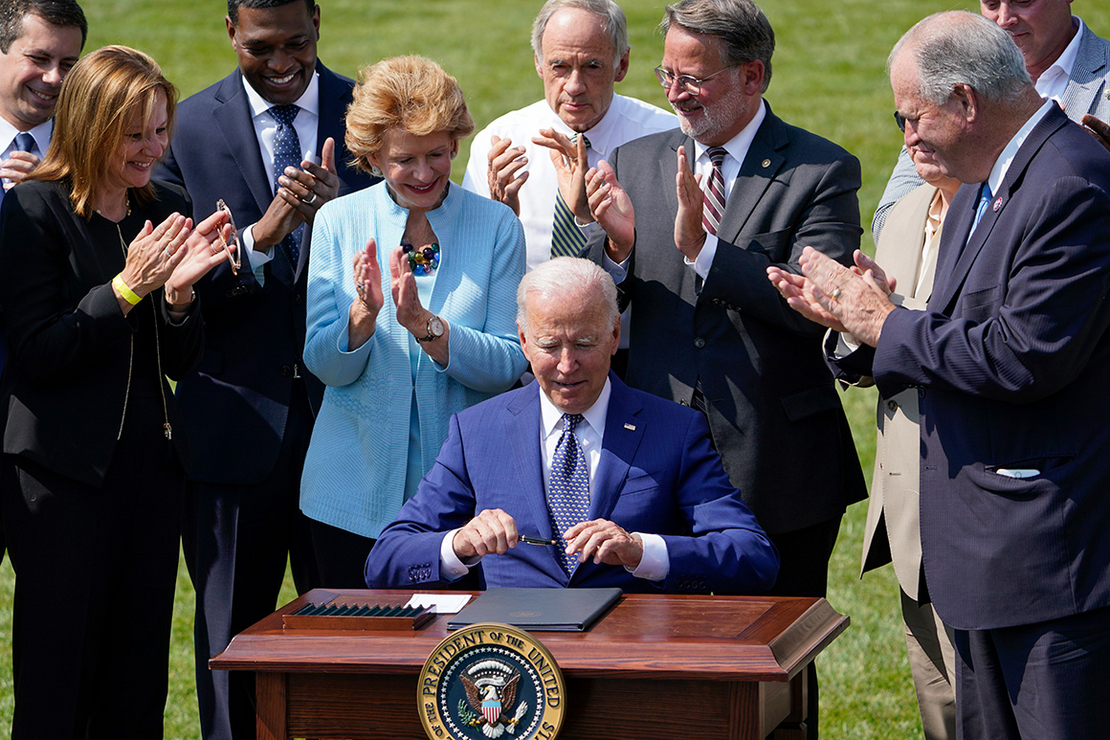 Democrats are scrambling to marshal corporate support for their $3.5 trillion reconciliation package as the fossil fuel industry and other business sectors seek to kill the party-line measure filled with climate initiatives.

The White House is urging companies and CEOs to promote the reconciliation package’s climate investments, if not the entire legislation. Environmental advocates are trying to organize support from Amazon.com Inc. and other major companies that have made their own climate pledges as well as big employers like Walmart that have large footprints in the states of moderate Democratic lawmakers.

So far, that effort lags behind the opposition campaigns of big trade associations like the U.S. Chamber of Commerce and Business Roundtable, whose members include companies that claim to support climate action. Those mainstream business groups are most focused on halting corporate tax increases, though they’ve also targeted several climate provisions.

The oil and gas industry, meanwhile, is spearheading opposition to tax changes that could make drillers pay more. Its American Petroleum Institute lobby group is also pushing back against clean energy tax credits and a clean electricity payment program — the backbone of Democrats’ climate agenda — as well as a new fee on methane.

Democrats — after organizing corporate backing for other climate policies, such as auto industry support for tighter tailpipe pollution rules — are starting to grow alarmed at the imbalance of corporate lobbying and messaging.

President Biden’s team is trying to move companies off the sidelines. The administration is asking corporations across sectors to “put their full might behind combating the climate crisis,” a White House spokesperson said.

“It’s not possible to say you support tackling the climate crisis and simultaneously oppose the largest investment in and most important legislative vehicle to build a stronger, more resilient economy,” the spokesperson said.

The bipartisan infrastructure bill that passed the Senate this summer had much stronger corporate support, including from groups now campaigning against the reconciliation bill.

Democrats are emphasizing to businesses that the bipartisan bill’s fate is linked to the bigger reconciliation bill, one advocate said, even as centrist lawmakers have tried to break the two apart.

Just as Democrats are seeking local employers who can tout the legislation’s potential benefits, API is organizing oil and gas firms to argue that targeting the industry would harm local economies.

“Sometimes the best voices in the debate are the constituents that work closely with those policymakers,” said Frank Macchiarola, API’s senior vice president of policy, economics and regulatory affairs.

“It’s compelling for [lawmakers] to hear from experts or advocacy groups in Washington, D.C. But at the end of the day, it’s even more impactful for them to hear from their constituents,” he added.

Under the banner of an API-funded group called Energy Citizens, the oil industry has flooded Facebook with hundreds of ads raising concerns about the reconciliation package and targeted Democrats in swing districts who could face the most heat for backing the bill.

"OUR ENERGY INDEPENDENCE IS AT STAKE," shouts one ad that shows what appears to be an incomplete elevated railway. "RAISING TAXES IS A BAD IDEA."

The ad was launched in mid-July and may have been viewed by well over 1 million people in Texas, Pennsylvania, Ohio and other states, according to summary data from Facebook Inc.’s ad disclosure library.

Earlier this week, Energy Citizens unleashed dozens of similar promos aimed at constituents of centrist Democrats like Rep. Conor Lamb of Pennsylvania, who is running for the Senate. The ad listed the telephone number for Lamb’s Mount Lebanon field office and urged constituents to call.

API is coordinating those efforts with other industry groups, such as the National Association of Manufacturers. Those groups also object to the package’s price tag, its timing and the fast-track reconciliation process it’s moving through.

That campaign has already borne fruit. Sen. Joe Manchin (D-W.Va.) yesterday published an op-ed in The Wall Street Journal echoing those concerns. Industry groups have been quoting it in their own appeals.

Corporate support for Democrats’ plans, meanwhile, has been muted. Some advocates attribute that to the nature of the reconciliation process; companies often want to vet legislative text before publicly endorsing it, but the content of the Democrats’ bill remains in flux.

Environmentalists and their allies in corporate advocacy worry that businesses are squandering an opportunity to ensure the emerging legislation includes strong climate provisions.

"What I’ve heard from folks on Capitol Hill is that very few companies are really showing up," said Bill Weihl, the founder and executive director of ClimateVoice, a nonprofit focused on promoting corporate climate advocacy. "And I think that’s a huge problem."

Weihl, who previously led sustainability efforts at Google and Facebook, is working with employees in Silicon Valley to marshal internal support for the climate components of the reconciliation package.

Technology giants are among the biggest and most powerful advocacy groups in Washington, but they have played a minor role in the climate policy debate in recent years (Climatewire, Nov. 16, 2020).

Amazon has spent over $10.1 million on lobbying in the first half of 2021 — the most of any company, according to data compiled by the transparency group OpenSecrets. Some of that went toward "issues related to sustainability" and "infrastructure and sustainable transportation," lobbying disclosure filings show.

But Amazon is also a member of the Chamber of Commerce and the Business Roundtable, both of which have come out against the corporate tax increases Democrats are proposing to help pay for the reconciliation bill.

"The Chamber will do everything we can to prevent this tax raising, job killing reconciliation bill from becoming law," Suzanne Clark, the Chamber’s president and CEO, said in a statement last week.

Amazon didn’t respond to an interview request or questions about how it’s engaging lawmakers and its trade associations around the reconciliation bill.

Facebook, whose platform the oil industry is using to oppose the climate legislation, also didn’t respond to questions or an interview request. The social media behemoth has spent over $9.5 million on lobbying so far this year, the second-most of any corporation. It has disclosed lobbying on "issues related to climate change."

Climate advocates want to see more from influential companies like Amazon, Facebook and Walmart, which has nearly 1.6 million workers in the U.S. and is one of the leaders of the We Are Still In climate coalition.

Walmart is also the second-largest employer in Arizona and West Virginia, where centrist Democratic senators will have outsize influence on the fate of the reconciliation package.

Corporations with net-zero emission commitments have "got to be advocating so that there are laws in place to allow them to meet their goals," said Anne Kelly, the top lobbyist at Ceres, a sustainable investment advocacy group. "If you’re committed to your goals, you need to be advocating accordingly."

That means the firms themselves have to get involved, she said.

"Trade associations do not always responsibly reflect the climate ambitions of their members," Kelly said. "More need to step in individually and in their own name and not rely on what their trade associations are saying on their behalf."