Hemp could clean up — if people stop mistaking it for pot 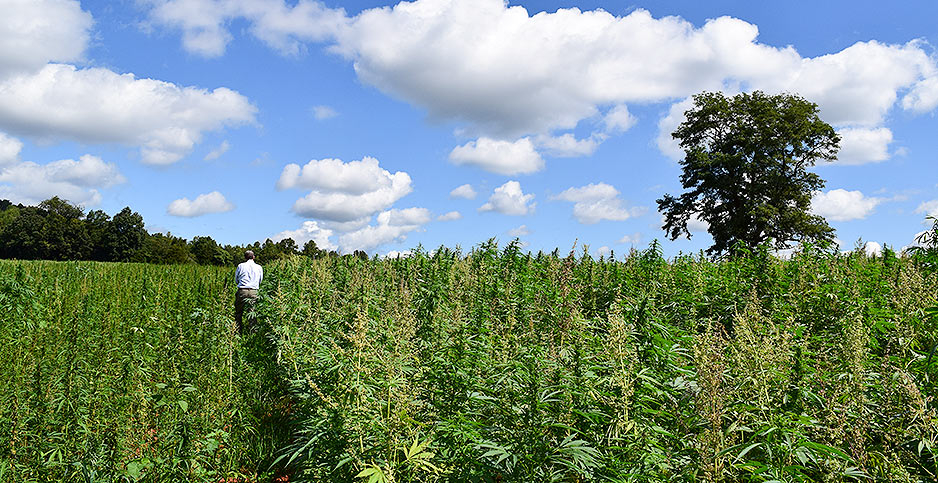 MORVEN FARM, Va. — Like at Fukushima and Chernobyl, hemp is being planted in the hills of southwest Virginia.

No nuclear reactor melted down here, but mountaintops in this part of Appalachia are their own wastelands.

Enter Cannabis sativa — the kind for making rope, not reefer — and a process called phytoremediation.

Hemp has proved to be one of the best plants for soaking toxins out of contaminated soil, including at the infamously irradiated sites in Japan and Ukraine.

The plant biotechnology company and researchers at the University of Virginia have partnered to pinpoint the best variety of industrial hemp to transform soil — and the regional economy bludgeoned by the coal industry recession.

For decades, coal mining has leveled hillsides in southwest Virginia, but the commercial promise of flat land — a prized commodity in Appalachia — is regularly undercut by sites being either too far from town, too contaminated or too compacted to farm.

Hemp offers hope not only for remediating that land — removing the contamination — but for reclaiming it by repairing the soil. The plant’s deep taproot is ideal for restructuring, aerating and enriching soil, said UVA professor Michael Timko. "It’s fast-growing, doesn’t require a lot of input and can grow in pretty marginal areas — it’s a weed," he said.

Timko was already working with 22nd Century in another "sin industry" with another southwest Virginia staple fallen on hard times — tobacco.

With the worn-out fields of the tobacco belt exhausted, Timko saw hemp as a chance to give farmers back part of what they have lost.

"It looked like it was going to be a win-win situation," he said.

Timko and fellow researchers are harvesting the seed of their inaugural crop this month in several places across the state, including old mining lands on UVA’s campus in Wise County.

But hemp’s fundamental problem, despite evolving regulations in Virginia and nationwide, remains the same — it looks exactly like marijuana.

It lacks enough psychoactive tetrahydrocannabinol (THC) to get anyone high, but hemp is the same species and visually identical.

Enough people called in reports of marijuana growing in the greenhouses on campus in Charlottesville that Timko moved the plants to another bay, away from view.

For a hemp renaissance to bloom in the commonwealth of Virginia, he said, "people are just going to have to get educated."

The state has a storied hemp history. Thomas Jefferson grew hemp, a cash crop in colonial times, at Monticello and invented a "breaker" machine to make fiber from it.

Hemp was just another crop until the turn of the last century.

After the Mexican Revolution, which started in 1910, fear followed a wave of immigrants who brought with them a cultural intoxicant — marijuana.

In 1937, the Marihuana Tax Act effectively criminalized the "Murder Weed" and "Assassin of Youth," based on its link not only to immigrants but to African-Americans, musicians and other "deviants."

The nation’s hemp crop proceeded to wither, except for a brief revival during World War II, when the "Hemp for Victory" campaign pushed production to more than 150 million pounds in 1943.

By 1948, production was just 3 million pounds, only to plunge lower with the subsequent synthetic fiber revolution. Then, in 1970, the Controlled Substances Act declared industrial hemp, and all cannabis varieties, a Schedule I narcotic.

That remains in effect, but Congress finally drew a first line between industrial and recreational hemp with the 2014 farm bill.

As concentrations of THC were below 0.3 percent, states were authorized to create industrial hemp research programs at government agencies and universities.

A year after the farm bill’s passage, Virginia became one of 31 states to legalize a hemp pilot program, overseen by the Virginia Department of Agriculture and Consumer Services.

"It’s very much a patchwork, but the rate with which these things are moving is tremendous," Rushton said of the nationwide movement.

Neighboring Kentucky has become the nation’s second-biggest grower outside Colorado, including a project funded by grants from clothing manufacturer Patagonia on 5 acres of reclaimed mine land.

But in Virginia, only 37 acres of hemp was planted by Virginia Tech, Virginia State University and James Madison University in 2016.

"Virginia’s being Virginia," UVA’s Timko said. "They’re being cautious, making sure they dot all the i’s and cross all the t’s."

His university joined this year. Despite the hemp legacy of Jefferson, the school’s "founding father," it took convincing for UVA to partner with 22nd Century.

"The university was skittish about doing big press releases about doing hemp research because of the perception that somehow they were endorsing recreational marijuana," he said.

That stigma has set hemp research back decades, but the notion that industrial hemp provides cover for illegal marijuana cultivation is undercut by the plant itself, Timko said.

That’s because growing the industrial and recreational varieties near each other isn’t feasible. Clouds of yellow pollen able to travel up to 5 miles create cross-fertilization issues, reducing desired THC in recreational plants and raising it beyond legal limits in industrial ones.

Specializing in smoking harm reduction with its low- and high-nicotine tobacco varieties, 22nd Century has set its sights on zero-THC hemp.

"That’s something we have and are looking to commercialize in the next year or two," Rushston said.

Yet, even without THC, hemp still doesn’t look like just another crop.

During the course of the research, Timko is keeping his eye out for ways to physically differentiate hemp from marijuana. One potential option may be turning the plant’s leaves purple by boosting anthocyanins.

The dream scenario in the search for the perfect Virginia varieties of hemp would be to find "ditch weed" still growing somewhere in the woods.

Barring that, Timko was starting from scratch after nearly a century of prohibition.

First, he needed seed, but because hemp is still considered a narcotic, the Drug Enforcement Administration considers moving it across state lines drug trafficking.

Despite the farm bill, hemp still has Schedule I status. Kentucky Republican Rep. James Comer has sponsored legislation to exclude hemp from the definition of marijuana in federal law.

So Timko went overseas for seed, only to find a limited and expensive market. One deal, for a phytoremediation line used at Chernobyl, fell through. He found other seed in Europe. With all the paperwork, it took a year for it to arrive in Charlottesville.

"There are legal impediments that just don’t make sense to us," Timko said.

The project also needed seed it could "save" for the following year.

In modern agriculture, seed ownership is big money, restricting researchers’ ability to refine a variety from season to season.

The university and 22nd Century had to strike a deal over the ownership of any fruits of the project.

After a fraught negotiation and some persuading by Timko and his old colleague Rushton, the two sides inked a revenue-sharing agreement.

Timko also went through a nearly eight-month process to certify his laboratory as a Schedule I research facility, just in case the genetic work accidently raises THC levels above legal limits.

"I want to be able to do all sorts of things with my seed; some of that is to manipulate it, which may take it out of industrial hemp," Timko said.

Under orders from DEA, the 50-pound bags of seed were kept in a locked storage room with only limited swipe-card access. Small amounts of seed for laboratory work are kept in a safe.

By the time all that was done, it was past time to plant.

Seeds started making it into the ground in late June, rather than May, in several places across the state. Researchers planted six varieties on 8 acres at the university’s Morven Farm just outside of Charlottesville, and the same six varieties, plus a special phytoremediation line, on 8 acres in Wise County.

The stand of hemp at Morven Farm — a sprawling, classic Virginia estate donated by billionaire John Kluge — has fared best, far better than Timko expected after the initial few weeks. After germination struggles, the plants were small and scrubby in the rust-colored soil until some well-timed rain sent some shooting up to about 10 feet tall.

The crop in Wise County did not fare as well. In the thin layer of topsoil, researchers opted for no-till cultivation, but without a set herbicide regime, the plants struggled with competition from weeds.

But given the shortened growing season and other issues, Timko was pleased with the results of a project that he didn’t even know he would be doing a year earlier.

Seed from this year’s harvest, better-suited to growing in the tough conditions, will go back into the ground.

"We’re already thinking ahead of what we’re going to be doing for next go-around," Timko said.

Over the winter in Wise, a heavy layer of lime will be put down raise the pH of the soil. Planting will be done in furrows and mounds to help with drainage.

The first year will yield some data on the phytoremediating impacts on the soil.

Ideally, hemp will be worked into a rotation with another crop to reinvigorate soil — hemp to break up compacted earth and something like alfalfa to enrich it.

"Reclamation and remediation are both practical outputs," he said. "If they both work, great. If one works better than the other, I’m not going to be sad."

Phytoremediation also doesn’t undercut the potential use of the plant, Timko said.

Toxins generally do not make it into the seeds, which can be used to make oils and other products. Whatever it does contaminate, Timko said, could still be used as biofuel, with contaminants captured like they are during coal combustion.

Out of the shadows

Ultimately, though, farmers need somewhere to sell their new crop.

"If you don’t have that all vertically integrated at the start, the growers are going to lose their shirts and become disenchanted," Timko said.

After a century in the shadows, reviving hemp production will require the development of specialized farming and processing equipment as well as the companies and entrepreneurs ready to put seeds, oil and fiber to use.

With more than 25,000 known uses for hemp, the trick will be pinpointing one that works locally.

Timko said he has already spoken with people interested in a "treeless" paper industry, as two crops of hemp generate roughly the same amount of fiber as a 20-year stand of trees.

Another potential boon for sustainability may be "hempcrete," a building composite made out of hemp and a binding agent.

Timko is also working with members of UVA’s medical school on researching cannabidiol, a non-psychoactive component of cannabis that has shown promise for treating epilepsy.

"It’s not a lot of people sitting around getting high and singing ‘Kumbaya,’" Timko said. "It’s actually proven chemistry and biochemistry — that’s a little harder thing to grasp," Rushton said.

With so much promise in hemp, Timko said he hopes the federal and state governments will get out of the way of a potential boon for some of the poorest places in Virginia.

"Give these people something to grow," Timko said.