Here are Biden’s next moves on climate 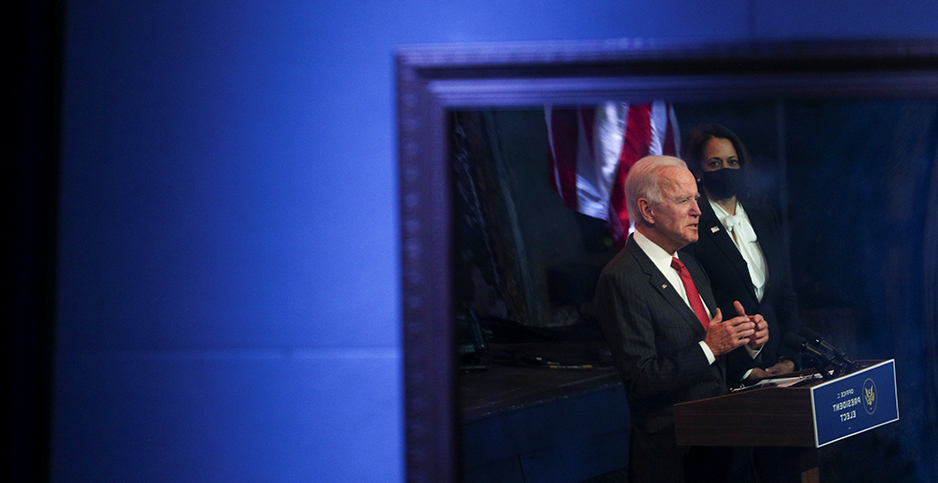 President-elect Joe Biden will announce additional pillars of his climate team in the coming weeks, including EPA administrator and Interior secretary. Tom Brenner/REUTERS/Newscom

Expect the earthquakes to continue.

Biden plans to name more Cabinet officials before Christmas — including the traditional climate power centers of EPA administrator and Interior secretary. He’ll also appoint a domestic climate czar, and tap leaders for the Treasury and Defense departments, once-distant corners of the climate portfolio where the Biden transition has already embedded climate experts.

Biden campaigned on orienting the entire federal government toward climate action. Observers say his early picks have lived up to that, including former Secretary of State John Kerry as a global climate envoy. That is raising expectations that climate change will continue to shape his Cabinet.

"There is literally something for every agency to do," said Evergreen Action’s Sam Ricketts, crediting the Biden team with recognizing big opportunities in little-noticed corners of the sprawling federal government.

"Everyone now realizes, this is a time for a national mobilization. This is the time to use every tool."

Biden’s team signaled this week that the incoming president would name a senior domestic policy chief to oversee climate progress at agencies from EPA to the Interior and Treasury departments.

The domestic climate czar will face the challenge of coordinating policy between agencies as diverse as the departments of Defense, Housing and Urban Development, and Agriculture.

"I think the real question and an important question is how big of a team are they going to have, each of them, and how integrated those teams are going to be," said David Doniger, senior strategic director for the Natural Resources Defense Council.

The two officials will share tasks, including the creation of a new commitment to the Paris Agreement that must draw on emissions reductions from policies administered across the federal government, if not beyond.

Before the election, the Biden campaign was flooded with blueprints from think tanks and environmental groups urging the former vice president to boost climate action by creating a White House policy shop that would be coequal to the National Economic Council.

Headed by a director with star power and a seat in the West Wing, a National Climate Council could ensure that agency heads will deliver on Biden’s election pledge of a carbon-neutral U.S. economy by midcentury.

"[E]very agency in the federal government has some degree of responsibility in addressing climate change — and so does every policy council in the White House," wrote policy experts and Obama administration alumni in a memo made public last week. "This diffusion of responsibility can all too easily lead to confusion, turf battles, and inaction. When everyone is partially responsible, no one is ultimately in charge."

The Climate 21 Project group advocated for an empowered assistant to the president with a substantial staff. It seems that role has been bifurcated, with Kerry presiding over international elements of Biden’s climate agenda.

Christy Goldfuss, a former chair of the White House Council on Environmental Quality (CEQ) and the co-chair of the Climate 21 Project, said it doesn’t matter if the Biden administration creates a new policy council out of whole cloth or takes a different approach. The Obama administration under climate leads John Podesta and Brian Deese built out a substantial staff that supported climate work at other agencies.

"I would say the announcement of a high-profile climate champion like Secretary Kerry already puts this in a different place than where we were at the end of the Obama administration, because you will have both the high-level international focus and then what we’re hearing out of the team now of someone focused at the domestic level," said Goldfuss. "That’s a powerful combination."

To have the same profile as Kerry, who was the 2004 Democratic presidential nominee, Biden’s domestic climate lead could be a past or present governor, Cabinet member or presidential contender. Former White House chief of staff Podesta, ex-EPA Administrator Gina McCarthy, former Energy Secretary Ernest Moniz and billionaire presidential candidate Tom Steyer have all been mentioned as possible candidates.

Many will also have the extra job of rebuilding their agencies’ administrative capacity.

The Interior Department is expected to return the Bureau of Land Management headquarters to Washington. The Commerce Department will have to rebuild climate science programs under NASA and NOAA. The Department of Justice is slated to expand its environmental enforcement in new ways.

Within the White House, the next director of the Office of Management and Budget — which will play a role in all of Biden’s climate regulations — will take over a workforce that was recently stripped of many civil service protections, allowing the Trump administration to fire staff members more easily.

Mary Nichols, the chair of the California Air Resources Board, is the odds-on favorite for EPA administrator if she wants the position.

Jennifer Macedonia, a former senior EPA adviser, said it will be important for Biden’s EPA team to begin strategizing and setting a timetable for its greenhouse gas regulatory program even before an administrator is confirmed.

Macedonia, who co-wrote the Climate 21 Project’s EPA recommendations with transition team member and former senior EPA lawyer Joe Goffman and Brenda Mallory of the Southern Environmental Law Center, said the agency should work with the White House budget office to expedite review of rules with the goal of having them completed and through the courts before the end of Biden’s first term.

"There’s so much stuff that needs to get done, and it does take time, so the sooner they get started, the better," she said.

BLM hasn’t had a Senate-appointed director since 2017, creating a legal morass for the next administration to untangle, he said. Biden could get a head start on that by naming a BLM director before his inauguration, he added.

But in the meantime, the Trump administration is making Biden’s to-do list even longer by rushing to finalize actions like drilling in the Arctic National Wildlife Refuge.

"Bernhardt is trying to throw as much sand in the gears as he can on the way out," Weiss said, referring to Interior’s secretary, David Bernhardt.