Here’s how climate factors into Trump’s talks with Kim 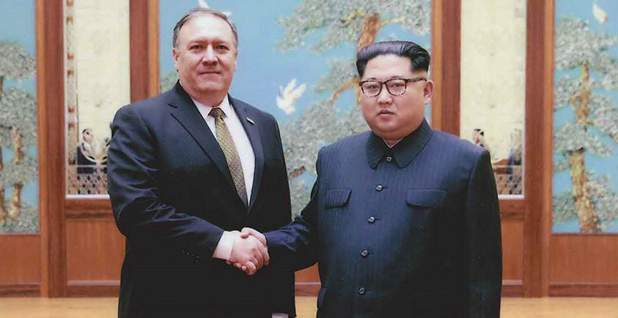 The anticipated meeting between President Trump and North Korean dictator Kim Jong Un could put the former real estate tycoon eye to eye with a reviled autocrat who appears more in line with global thinking on one issue: climate change.

North Korea is a party to the Paris Agreement, the 2015 pact that Trump plans to withdraw the United States from despite an uproar from allies around the world.

North Korea — whose carbon emissions rank in the bottom half of nations worldwide — put forward a hefty commitment to cut its greenhouse gases 37.4 percent compared with 1990 levels. And as Trump was pulling the United States out of the agreement last June, Kim described Trump’s decision as "the height of egotism."

Experts doubt the climate pact will play a role in the historic meeting between Trump and Kim scheduled for next month in Singapore. But if the summit occurs, they say, it could have a negative effect on global warming.

That’s because if sanctions against North Korea are lifted, the hermit nation’s coal could flow onto the world market, with the bulk of it ending up in South Korea, Japan and China. Also, the United States and its allies once again are offering to help North Korea provide electricity to its people — a sweetener that has been used in the past and that would likely be accomplished with fossil fuel technology that would take advantage of North Korea’s domestic coal reserves.

The country has an estimated 100 billion metric tons of coal in reserve, and exporting it is an economic mainstay. Last year, the U.N. Security Council responded to North Korea’s missile tests by slapping a $400 million annual cap on North Korean coal exports.

Ming Wan, a professor of government and politics at George Mason University, said the loss of access to the Chinese market has been particularly painful for Pyongyang. China had been increasing its purchases of North Korean coal in recent years. Reuters reported last week that North Korean traders have responded to hopes that sanctions might be lifted soon by selling coal to Chinese buyers at cut-rate prices and stockpiling it for them inside North Korea.

The relaxation of sanctions would almost certainly be part of any deal to persuade North Korea to abandon its nuclear arsenal.

Secretary of State Mike Pompeo floated a related idea last week when he said during an interview on CBS’s "Face the Nation" that North Korea could get help revamping its own electricity infrastructure if the talks go well next month.

Most ordinary North Koreans live without power during the day, despite the country’s status as a net energy exporter. That energy poverty kept North Korea’s greenhouse gas emissions at 63.8 metric tons of carbon dioxide equivalent in 2013, while South Korea put out 673.5 MtCO2e — more than 10 times as much.

Pompeo said if North Korea denuclearized, U.S. capital would flow into sectors of its economy ranging from agriculture to power infrastructure.

"Our entrepreneurs, our risk-takers, our capital providers" would finance this, he said. "Not our taxpayers."

The United States and its allies have tried in the past to persuade North Korea to abandon its nuclear arsenal in exchange for energy aid, but those efforts always fell flat.

President Clinton in 1994 offered Pyongyang two light-water nuclear reactors and deliveries of fuel oil in exchange for denuclearization — a deal known as the Agreed Framework. Trump’s current homeland security adviser, John Bolton, helped to scuttle it in 2002 as undersecretary of State for President George W. Bush.

Ming said the bargain failed and the reactors never arrived.

In 2005, it was South Korea’s turn to offer its northern neighbor electricity in exchange for surrendering its arsenal. The talks faltered then, too.

"Historically, the energy issue has been at the heart of all the nuclear negotiations, because it’s always the excuse any country building a nuclear reactor invokes for why they wanted a reactor," said Michael O’Hanlon, a senior fellow in foreign policy at the Brookings Institution. "And it’s often not legitimate, but it’s potentially legitimate, so you have to somewhat play along."

Pompeo offered no details about why he believes U.S. energy investment would flow into North Korea if sanctions were lifted, and the State Department’s Bureau of Energy and Natural Resources did not respond to requests for comment.

North Korea is one of the most unstable and autocratic nations on Earth, led by a dictator with the ability to seize any assets that cross his border. Pompeo didn’t mention a role for financial assistance from the Overseas Private Investment Corp. or another U.S. agency.

Sen. Lindsey Graham (R-S.C.), also appearing on "Face the Nation" a week ago, said that exchanging aid for a denuclearized North Korea would be the "best money we ever spent." But the Trump administration has gutted aid in its first two budget requests to Congress.

"The Trump administration is not a big believer in foreign aid, so why are they going to be all of a sudden generous toward North Korea when they’re not generous toward much nicer people in developing countries in Africa and South Asia and elsewhere?" Graham said.

There have been efforts for decades to institute an Asia Super Grid that would serve the Korean Peninsula and its neighbors, Japan and China. Son Masayoshi, CEO of SoftBank Group, has floated that effort as one way to bring power to the energy-starved North Korean people.

Jane Nakano, a senior fellow at the Center for Strategic and International Studies, said the Trump administration could contribute to that.

"I think the best role for the United States would be some kind of multilateral initiative that could bring U.S. commercial expertise to the table together with other countries that are willing to invest and contribute to developing energy infrastructure in North Korea," she said.

Still, it’s not clear whether federal or private investment would be enough to entice Kim to give up the nuclear arsenal that props up his regime.

"My view is that this is less an issue of [North Korean] disinterest and more an issue of the deals themselves," said Richard Nephew, a senior research scholar at the Center on Global Energy Policy at Columbia University’s School of International and Public Affairs.

Energy assistance is "something the North wants, but not at any price," Nephew said. Kim has indicated that he sees the fall of former Libyan dictator Moammar Gadhafi in 2003 as a cautionary example of what befalls leaders who give up their nuclear programs.

If energy assistance comes "as part of a deal the North can more generally accept, then I think this would be a valuable incentive," Nephew said. "But the linchpin to me is what kinds of nuclear and military concessions we will require."