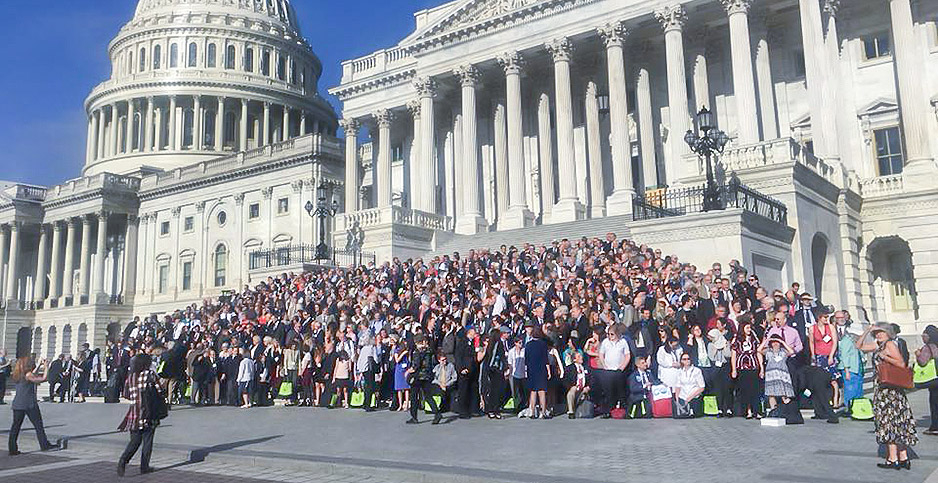 It was lunchtime on Capitol Hill, and Samantha Panchèvre, a Georgetown University senior, was stewing over Congress’ failures about climate change.

After a stop in a Democratic House member’s office, Panchèvre had been talking about the merits of calling someone a "climate denier" if they don’t accept established climate data. She was eating a hearty salad and thinking about her next meeting. It was with Republican Senate staffers, and she decided to soften her rhetoric.

"That’s going to be the most challenging for me," said Panchèvre, 22. "At Georgetown, I walked on campus the first day freshman year and was like, ‘Where is the activism? I need to do this.’"

Now she’s doing it on the Hill.

For nearly a decade, the Citizens’ Climate Lobby (CCL), a nonpartisan group pushing for a price on greenhouse gas emissions, has sent grass-roots activists to Congress to lay the groundwork for a bipartisan approach to climate change. Panchèvre was one of several dozen new citizen lobbyists to join the group’s effort last week, when about 1,200 activists streamed into the Capitol complex to ask for a carbon tax.

The organization, with volunteers in nearly every congressional district, is lobbying for a $15-per-ton tax on greenhouse gas emissions. The plan would return the revenue to American households through monthly dividend checks.

"I’m really freaking nervous," said Isabella Wrobel, 26, of New Rochelle, N.Y. Sitting in a hotel ballroom on a recent Sunday, she was one of the first-timers learning how to talk with lawmakers and their staff. So was Jillian Glantz, a student from Edinburg, Texas. "I’m really happy that we’re with groups."

Instructors flipped through a slideshow about how to hone the pitch.

"We are focused on what we are for, not what we are against," said Elli Sparks, director of field development for CCL. Her colleague, Brett Cease, suggested showing how climate change will — and already does — alter lawmakers’ districts. "People are much more connected with their own backyard."

Since its first conference in 2010, when 25 people showed up, the group’s membership has increased dramatically. CCL now counts 100,000 people as supporters and says about one-third of them are consistently active. It also has subgroups ("action teams") to cater to specific constituencies, like self-considered conservatives and progressives and Spanish speakers.

While the group’s members tend to skew liberal, there was no demonizing of Republicans in the lobbying push last week. The organization says it works hard to eschew political bickering and name-calling. Here’s one example: The group is not blasting off emails to raise money from EPA Administrator Scott Pruitt’s ethics lapses. The strategy is to cultivate relationships with conservatives and liberals, a union that will be needed to address rising temperatures.

But there are strong feelings in these advocates, even if their tone to Hill staffers belies that passion. The election of President Trump and his antipathy toward science has shaken some of them. It prompted them to join.

"It’s great folks are staying engaged in the face of some cynical politics," said Ross Astoria, chairman of the CCL board, standing in the back of the ballroom and gesturing to the newbies. There’s a notion that only elite, powerful people can lobby, he said, adding that the process often leaves the new folks with a feeling of invigoration.

"It’s like a talisman," Astoria said. "They take it back to their district."

CCL leaves no representative of Congress unpamphleted. Not even nonvoting delegates.

As the training ended, Vicki Paul of California handed envelopes with marching orders to the amateur lobbyists. She was flagging people down with a walking stick, made to look like a palm tree to represent tropical U.S. regions without voting members, like Guam, American Samoa and Puerto Rico.

"It’s a good feeling to be working together," she said.

Standing nearby, Dave Siegel, a newbie from a politically purple region in Northern California, said he’s had success convincing others of the dangers of climate change by showing them ice core data.

A big grin on his face, Siegel said there was a silver lining in the increased frequency and strength of extreme weather events: They make the case for addressing climate change.

"This is going to get easier for us," he said.

At 8 a.m. last Tuesday, a cheer went up from the throng of part-time lobbyists assembled on the Capitol steps. "Let’s go lobby!" The roughly 1,200 people fanned out to House and Senate office buildings.

After her meeting with a House Democrat, Panchèvre was recalling the experience with her mother, Maricela, and Jeff Baker, a retired firefighter from Austin, Texas. They were lobbying, too.

Successfully lobbying a Republican versus a Democrat can come down to language. With conservative lawmakers, talk about free-market economics and push the idea that a carbon price would prompt investments in new industries, they agreed.

"That is the huge part," Baker said. "Talk about the risk" of climate change with Republicans, he said. "This is an insurance price against that risk," he said of the carbon-fee-and-dividend concept. "It’s all about rewarding good behavior."

In congressional corridors, phalanxes of CCL volunteers explained the logic of taxing emissions and then rebating the revenue to voters. At times, they could be seen huddling together to hone their messages, depending on whom they were meeting next.

"A lot of times people feel like they need to be experts," said K.B. Mercer, who runs a children’s theater company in Portland, Ore. "And they’re not. That’s not why they’re here. They’re here to be the face, the human face."

One man reminded his team to hammer home that Americans will get paid. "Every month, people will get a check," he said.

Seated around a table in the Rayburn building cafeteria, a group from Pittsburgh warned that a climate bill passed with Democratic votes could lead to problems that plagued the Affordable Care Act. The GOP could say Democrats pushed it through on a party-line vote.

"We need it to be bipartisan," Chris Mullin said, leaning forward and clasping his hands. "We don’t want it to be like health care."

Across the room, Carol Denson, an elementary school writing instructor from Houston, who had lobbied before, said sometimes staffers need a primer on climate change. But after that, it can be effective to detail how higher temperatures affect lives in their home districts.

"If you want to go for a run in Houston, you have to get up earlier than you used to," Denson said. "I feel like the whole world is aware," she added, looking up at the ceiling in Rayburn, "and Congress is this weird place."

For Panchèvre, who is studying energy and environmental policy, her final of three meetings was with some staff for a Senate Republican, and she and her peers said they mentioned how climate change was hurting the state’s farmers, fishermen and agricultural businesses.

"There’s a certain place where you realize that you’re not going to win everyone with very leftist approaches," Panchèvre said. After the 2016 presidential election, she braced for the Trump administration’s environmental rollbacks, throwing in some expletives to punctuate her fears about what the president is doing to the ecosystem.

Yet, making the rounds last week brought her some solace.

"I’ve talked to more Republicans these past couple weeks than I have in a long while, because I tend to avoid them, which is not healthy behavior, that’s not constructive," Panchèvre said.

A climate law, whether a carbon tax or something else, would be fragile without conservative backing, she said.

"It has to be bipartisan," she said. "That’s exactly why."