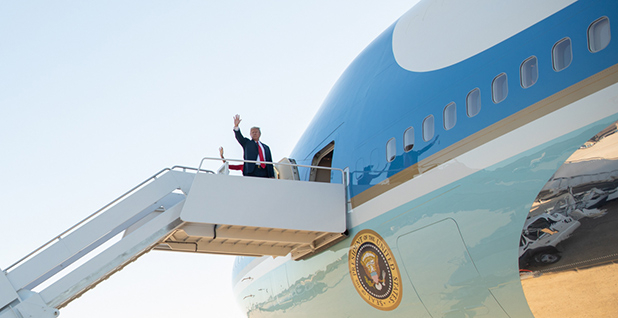 The oil and gas industry is looking for a mind reader.

It thought that companies pursuing projects to help President Trump reach his "energy dominance" goal might get a free pass when it comes to his controversial steel tariffs. That might not be the case. At least one pipeline builder is wrestling with Trump’s competing messages: Pump more oil, but your steel will cost more.

A ruling by the Commerce Department earlier this month has sent the industry into a frenzy, after the agency rejected a request by Plains All American Pipeline LP to be exempted from paying new steel tariffs imposed by Trump. It underscores the tension between oil and gas firms and a White House that shares its vision for expanded fossil fuel development while simultaneously erecting trade barriers.

The company wants to build three pipelines to unleash a glut of oil from the booming Permian Basin in Texas. The Commerce Department rejected the request for an exemption because it said a domestic steel supplier could meet the company’s needs for a $1.1 billion pipeline stretching 550 miles. The company had already contracted for steel from a supplier in Greece (Energywire, July 20).

"The Plains decision demonstrates what we’ve been saying from the beginning, that the exemption process is not transparent, not predictable, and is absolutely likely to have incorrect and bad outcomes," said Christopher Guith, senior vice president for policy at the U.S. Chamber of Commerce’s Global Energy Institute. "This is a perfect example."

Industry groups contend that the Trump administration’s process for getting an exclusion from the 25 percent tariff on imported steel and the 10 percent tariff on imported aluminum is a black box. The Plains All American episode is laying bare the frustrations between energy firms and Trump on trade, which also extend to renegotiations on the North American Free Trade Agreement and other policy matters like the renewable fuel standard and an emerging plan to aid ailing coal and nuclear power plants. The pipeline would transport up to 670,000 barrels of oil per day to the Gulf Coast, where it could be exported abroad.

The tariffs are also raising concerns in Congress. The House Ways and Means Subcommittee on Trade held a hearing yesterday on the exclusion process.

"I’m worried that these tariffs are going to halt investment in these projects, and ultimately, that’s going to cost jobs," said Rep. Erik Paulsen (R-Minn.).

The Commerce Department ruling would add $40 million to the cost of the pipeline being built by Plains All American. The company plans to move forward, Chief Operating Officer Willie Chiang said during the hearing.

But Chiang and other industry executives worry about a chilling effect. They’re also raising concerns about quotas, which could result in materials from a foreign supplier being cut off before a project is finished. Chiang explained that the industry is "interconnected," so logjams from insufficient pipelines could curb production.

"This is not going to stop this pipeline, but the question will be, what is the effect of this going to be on future investment?" said Stephen Comstock, tax and accounting director at the American Petroleum Institute.

Slowing the construction of pipelines could have a more immediate effect on the climate: Oil bottlenecks in the Permian are increasing the use of flaring. Burning methane, a byproduct of producing oil, is a potent contributor to global warming. Existing pipelines are mostly at capacity, so the state regulator — the Texas Railroad Commission — is weighing whether to ease restrictions on flaring natural gas.

While many oil and gas companies operating in the Permian have taken steps to limit flaring, "other producers are now counting on the [Railroad Commission] to give them a free pass to waste and pollute in order to keep the oil spigot flowing," Colin Leyden, the Environmental Defense Fund’s senior manager of state regulatory and legislative affairs, wrote in a recent blog post.

EDF said some companies waste 10 percent of gas through flaring.

The Commerce Department said in its rejection to Plains All American that a domestic provider, Berg Steel Pipe Corp. in Florida, could produce steel for the project, known as Cactus II.

"If you don’t have the pipeline takeaway capacity and it is going to result in more gas being flared than the Railroad Commission wants to allow, then the commission can throttle production," Fuller said. "It’s something they’re all wrestling with down there."

Plains All American sought a specific length and type of pipeline steel for its project, through a request for proposals. No companies in the United States answered the offer. Berg Steel said it could offer a similar, but different, style and length of pipeline. Commerce determined that it was close enough to the needs of Plains All American. So it rejected the company’s request to be excluded from Trump’s new tariffs on foreign steel.

"How this affects other projects moving forward will depend upon whether the specific pipeline-grade steel, diameter and length called for by those individual projects is available in a way that makes sense for those projects," said John Stoody, vice president of government and public relations with the Association of Oil Pipe Lines.

Stoody said the two types of pipelines operate the same functionally. It’s a point Berg Steel made in its case to Commerce, saying the options are "interchangeable products and fit for use in the same applications" and that Plains All American made a decision to buy steel from a foreign company "based on price and price alone."

Industry, though, questions whether domestic suppliers will manufacture the type of steel it needs.

"The steel industry will say we can make the steel and then the exclusion is denied, but I don’t know if anyone has figured out whether they can make all the steel that is requested in all the exclusions," Fuller said.