Here’s the Obama energy guy that Pruitt might hire 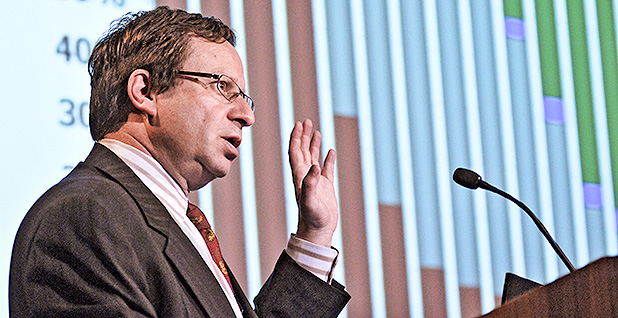 Steven Koonin, a former official in the Obama administration, is a candidate for the red team, blue team exercise on climate science. Charles Watkins/Department of Energy/Flickr

In the fall of 2014, Steven Koonin was finishing up an op-ed for The Wall Street Journal. The theme was a contentious one, especially for a former Obama administration energy official: How certain is climate science?

Koonin sent a draft around to about a dozen people he considers "friendly critics." He wanted their feedback. They included Michael Lubell, Koonin’s longtime friend, who was then director of public affairs at the American Physical Society.

Lubell warned him: "You’re going to be used."

He told Koonin that it’s virtually impossible to have a nuanced position in the climate change debate. "You’re either going to be put in one box or the other; you’re either a climate denier or you’re not. … Watch, they’re going to put a headline on your piece that says you don’t think that the science is settled."

Lubell was right. The headline for Koonin’s piece: "Climate Science Is Not Settled."

Koonin said of that headline, "I would have chosen something more nuanced." He thinks the working title when he handed it to the Journal was "Climate Clarity." But he noted, "I don’t have to sell newspapers."

The op-ed earned Koonin, a theoretical physicist, the ire of many in the climate science world, including his former colleagues in the Obama administration.

John Holdren, who was then President Obama’s science adviser, sent Koonin a note saying, more or less: "Dear Steve, I don’t think you have this right, and it’s not helpful," Holdren said in a recent interview.

Now, Koonin is again in the middle of a controversy.

He advocated for a "red team" approach to climate science in another Wall Street Journal op-ed in April. The exercise would allow critics to test the "consensus" around climate science. EPA Administrator Scott Pruitt has publicly expressed interest in the idea, and he’s rumored to be considering hiring Koonin to lead the process.

Koonin has met with Pruitt and other Trump administration officials to discuss the idea of a "red team," he told E&E News on Friday. He declined to comment on whether he’s in talks about running such an operation, but he said he’d consider it if certain conditions were met.

"I would convene such an exercise only if I felt I could do it with the integrity, thoroughness and transparency that characterizes the best of science advising," he said.

Koonin doesn’t like the idea of televising the potential climate debates, despite Pruitt’s suggestion that it might be in the public’s interest.

"I do not support a televised red team debate," Koonin said. He said he wants an "honest discussion about what the risks are and the certainties and uncertainties, what the efficacy is of various mitigation measures and responses."

EPA spokeswoman Liz Bowman declined to say whether Koonin is in the running for such a job.

She said of a broader effort to assess climate science: "It is essential that certainties and uncertainties in the science are accurately presented to the public and to decisionmakers. A robust, transparent public peer-review evaluation of climate change is something everyone should support."

Koonin, 65, has been director of New York University’s Center for Urban Science and Progress since April 2012. From 2009 until 2011, he was undersecretary for science in Energy Department under the Obama administration. He was previously BP PLC’s chief scientist and provost of the California Institute of Technology. He has a doctorate in theoretical physics from the Massachusetts Institute of Technology.

‘No dog in the fight’

Science — not politics — is what drives him, Koonin insists.

"I’ve got no dog in the fight about whether this is the greatest catastrophe that’s facing the planet or this is a nothing burger," he said. "This is something that is a national issue, and I feel the scientific community has an obligation to see that this is accurately portrayed."

But the climate science debate has long been highly politicized, and Koonin cannot escape it.

He’s gotten public blowback from prominent scientists and plenty of criticism from his former Obama administration colleagues, who say he’s being used by the Trump team to further an agenda to promote uncertainty and roll back climate change regulations.

They wrote that red team exercises "are dangerous attempts to elevate the status of minority opinions, and to undercut the legitimacy, objectivity and transparency of existing climate science."

Holdren wrote his own op-ed in July, in The Boston Globe. "The argument that such a process would be helpful is some combination of naive and disingenuous," he argued.

‘Somewhere between Trump and Obama’

So what exactly does Koonin think about climate change?

He said he’s not a climate "skeptic," and he doesn’t like the term. "I’m a scientist, and I think we have an obligation to portray the science accurately to decisionmakers and the public. That has been my goal throughout."

Asked whether he agrees with President Trump’s approach to climate change, he said, "The truth is probably somewhere between Trump and Obama. It doesn’t matter what I think about climate policy. I’m just a scientist. These are complicated scientific, political, social and, in some ways, theological issues."

He said, "My only agenda is to get a good science discussion."

In 2014, he wrote, "There is little doubt in the scientific community that continually growing amounts of greenhouse gases in the atmosphere, due largely to carbon-dioxide emissions from the conventional use of fossil fuels, are influencing the climate."

The "crucial, unsettled scientific question for policy," Koonin wrote, is: "How will the climate change over the next century under both natural and human influences?"

He’s also interested in geoengineering, the idea that humans can intervene in the environment in order to counter global warming.

In 2009, he co-authored a paper assessing the feasibility of pumping aerosol particles into the atmosphere to induce global cooling. The concept of geoengineering remains highly controversial, due in large part to concerns about unintended side effects.

Koonin said it’s important to know what’s feasible in terms of responding to climate change. Mitigation "is not going to be enough to do what most people think needs to be done," he told E&E News. He said he thinks adaptation will be "the dominant response," and it’s valuable to have other options "in our back pocket."

As for geoengineering, he said, "You want to know whether that’s an option or not."

Koonin’s previous work for a Democratic administration makes him an attractive pick for some of those who support a "red team" approach to climate science.

"He has the Obama administration background, so I think he could be seen as an honest broker," said Myron Ebell, a prominent critic of the prevailing views about climate science. Ebell ran Trump’s EPA transition team.

Some of Koonin’s former colleagues say he’s being used to advance Trump’s agenda.

"This is a brilliant man who is politically inept," said a former DOE official who worked with Koonin.

"I think Pruitt is using this as a straw man," that person said. "I hope Koonin doesn’t take it."

Another former Obama administration colleague said of Koonin, "I think there’s a general sense that he’s being exploited by the current administration. … I think political acumen has always been Steve’s Achilles’ heel."

That was the case during his time at DOE, the former colleague said. Koonin was very active in helping the Obama administration produce its high-profile Quadrennial Energy Review.

"He always had the sense that if he wrote it, if the policy paper was done, that everyone would just endorse that," the former colleague said. "He struggled to understand that policy has to be sold in the political environment."

Koonin brushes off those criticisms.

"I think I have tried to stick with the science, and if discussing the science disappoints people, that’s disappointing to me," he said.

If his goal — to get the science accurately depicted — lines up with what Trump’s team wants to do, "that’s not so bad," he said.