Here’s the strategy behind cities’ lawsuits against Big Oil 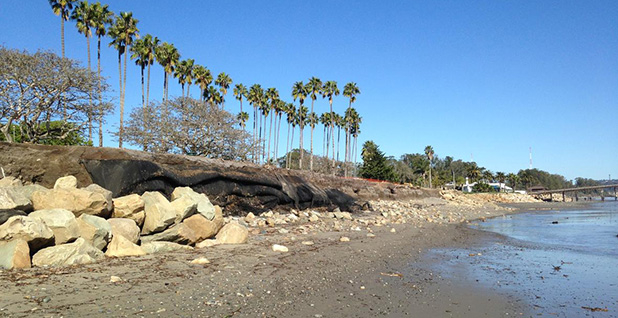 Lawsuits seeking to make oil companies pay for climate-related damages in California could go forward in both state and federal courts, after judges issued split decisions on where the cases belong.

That could give cities and counties behind the claims multiple chances to win. Oil companies need to prevent even one loss to avoid a powerful precedent, legal experts said.

"You have a bunch of different judges. If one of them holds the defendants liable even if [others] don’t, that is a huge victory for plaintiffs seeking to establish the defendants are responsible for the harms," said Ann Carlson, co-director of UCLA School of Law’s Emmett Institute on Climate Change and the Environment.

Eight California cities and counties have sued multiple oil companies in separate cases, arguing that combustion of fossil fuels contributes to sea-level rise and other costly impacts. The oil companies petitioned to move the cases to federal court, arguing there were federal issues. That happened automatically. Cities and counties sought to return the cases to state court.

Then District Judge Vince Chhabria ruled on March 16 that lawsuits from Imperial Beach, San Mateo and Marin County against 26 fossil fuel companies and trade associations should go back to state court. He said that federal common law does not govern their claims. He’s also handling suits from Richmond, Santa Cruz and Santa Cruz County against more than two dozen oil defendants. A decision on whether to return those to state court is pending.

"Given the global implications of the lawsuits and the billions of dollars at stake, it would make no sense for both sets of cases to proceed simultaneously, with one set in state court and one set in federal court," the defendants said in a motion filed with Chhabria’s court. The 9th Circuit should weigh in "before these cases go back to state court, raising the risk of inconsistent outcomes in these cases and the nearly identical cases being litigated on the merits before Judge Alsup."

If some of the cases ultimately return to state court, "this is actually about the best outcome for the cities," said Dan Farber, professor of environmental law at the University of California, Berkeley. While it increases their litigation expenses, "it gives them two different bites of the apple" with state and federal judges. "The plaintiffs get to bring cases under different sets of rules and sort of give it a shot both ways."

The stakes potentially are very large, Carlson said. In lawsuits against tobacco companies for harms caused by their products, multiple plaintiffs lost case after case. But when one plaintiff finally won, "that just changed the entire picture."

Similarly, one victory for the cities in these cases "has the potential to set off a cascade of lawsuits that establish liability and could costs the defendants billions of dollars," Carlson said. "It’s why they’re fighting these cases so hard."

Oil companies want all the cases thrown out. They’ve filed motions to dismiss the suits from San Francisco and Oakland in Alsup’s court. ConocoPhillips said the suits lacked jurisdiction because the company is headquartered in Houston. Chevron, based in California, cited prior climate-related cases that lost in federal courts.

Chevron spokesman Sean Comey said in an email that the cities’ suits "should not proceed in any court, state or federal."

"Chevron welcomes meaningful efforts to address the issue of climate change, but litigation is not an appropriate tool for accomplishing that objective," he said. "Under the Clean Air Act, the responsibility for regulating greenhouse gas emissions has been assigned to the EPA. The relief Plaintiffs seek would require the court to unilaterally change the nation’s energy and environmental policies. That would be improper and unconstitutional."

The lawsuits charge that oil products are a public nuisance. It’s an "unsettled area of the law" with no direct precedents, Farber said. That makes the federal judges’ conflicting rulings not as surprising.

"Where they think the law is unclear, different judges can have different views," Farber said. "That happens all the time. We don’t see it in such high-profile cases all the time."

In addition, the cities and counties claim that the companies knew for decades that their products contributed to climate change and hid that information, while making business changes to protect their profits. That’s different from a basic public nuisance lawsuit, said Michael Wara, director of the Climate and Energy Policy Program at the Woods Institute for the Environment at Stanford University.

"There’s not a lot of clarity about how it will play out," Wara said. "It’s raising a whole bunch of new issues under federal law and state law."

Unless the 9th U.S. Circuit Court of Appeals reverses Chhabria, the cases he ordered back to state court will be assigned to different judges in four Superior courthouses, in Santa Cruz, San Mateo County, Marin County and Contra Costa County.

"We believe, as did Judge Chhabria, that these cases do not satisfy any of the legal criteria for proceeding in federal court," Sher said. "It makes no sense to spend time and resources trying the cases in federal court only to have the appellate courts — whether the 9th Circuit or the Supreme Court — determine at the end that they should have been in state court all along."

It’s not uncommon to have cases in both state and federal courts, Sher said.

"The import, in sharp contrast to the fossil fuel industry’s position, is that the courts are appropriate places to deal with who should pay for the necessary planning and adaptation costs," Sher said.

There’s good reasons for the cities and counties to keep the cases in state court, and for the oil companies to want federal court, legal experts said.

"California nuisance law is really probably the most favorable pro-plaintiff nuisance law in the country," Carlson said. "That’s not going to be true for federal common law."

Under California nuisance law, "efforts to deceive the public about the harms that a product can cause, or to hide negative information, or to engage in a campaign to prevent regulation of that product is relevant," Carlson added.

That could become a factor with the municipalities’ claims that the oil companies knew about the threat of global warming and funded campaigns to try to undermine the credibility of climate science, Carlson said.

Federal court, in comparison, has much narrower rules around nuisance law. It’s not clear that any evidence related to what the companies knew and didn’t disclose about climate change would be relevant under federal nuisance law, she said. There isn’t a federal statute "that really defined what nuisance is."

The lawsuits contain other charges that would be relevant in state court. Those include product liability claims. California law allows damages for liability related to failure to warn consumers if a product is harmful, Carlson said.

In the federal cases, the oil companies and their allies argue that the Clean Air Act governs greenhouse gas emissions. That "displaces," or cancels out, the nuisance claims at the federal level.

They cite cases such as American Electric Power Co. v. Connecticut, in which states sought to cap utility emissions. That case went to the U.S. Supreme Court, which held that corporations cannot be sued for greenhouse gas emissions because EPA regulates those through the Clean Air Act.

However, Carlson, Farber and others said that Alsup appeared to indicate AEP is not a barrier in his order to keep the San Francisco and Oakland cases in federal court. That’s because the oil companies are not the ones emitting, unlike the utilities in the AEP case.

In state court, the AEP case is less of a factor. The Supreme Court in its ruling "was very careful not to say anything about a state nuisance claim," Wara said. The high court left open the question of what happens at the state level, he said.

That’s why the municipalities hope that their cases are eventually heard by the California Supreme Court.

"State court is going to be open to the idea of doing something that’s kind of unprecedented," Farber said. "It’s going to be hard to get the [U.S.] Supreme Court to be activist on the climate change issue."