Here’s what an oil bailout could mean for emissions 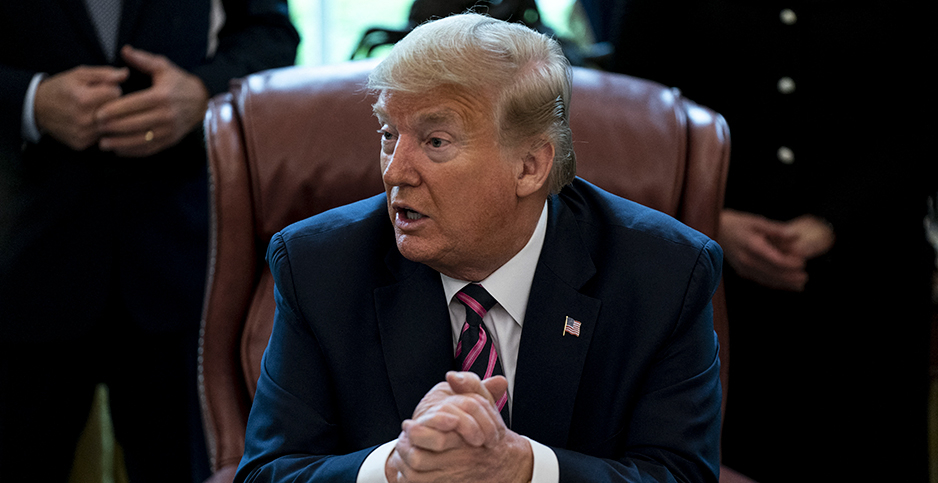 The Trump administration has proposed aid for the oil and gas industry because of the coronavirus pandemic. President Trump is pictured after signing a stimulus package Friday. Pool/Abaca/Newscom

A federal bailout of struggling oil firms is unlikely to alter the trajectory of carbon dioxide emissions, according to analysts, who say market factors dictate the pace of oil production over stimulus programs related to the coronavirus.

Yet if the Trump administration seeks to rescue wobbly shale drillers, an idea floated by Treasury Secretary Steven Mnuchin in an interview with Bloomberg News last week, it could help shape the government’s wider response to the economic free fall caused by the pandemic.

And that could have long-term implications for emissions.

"The government will have a choice, particularly in the forthcoming rounds of the stimulus package, to orient the economy to be more in the public interest than it might otherwise be when the economy fully emerges again," said Robert Stavins, an economics professor who studies climate policy at Harvard University.

The Trump administration and Republican lawmakers have so far resisted suggestions to include funding for renewable energy or green infrastructure into federal recovery efforts. President Trump has repeatedly expressed support for aiding the oil industry, which has been clobbered by shrinking oil demand.

Mnuchin said the administration will consider extending loans to struggling oil producers. Bloomberg reported that the proposed program would be run by the Federal Reserve, with the government possibly taking an equity stake in some firms.

While an injection of federal cash could keep some firms out of bankruptcy court, it is unlikely to change the amount of crude being pumped from U.S. oil fields, analysts said.

Demand for crude oil has plummeted as billions of people worldwide limit their movement. Rystad Energy, a Norwegian-based oil consultancy, estimates that American oil demand fell 30% to 14.1 million barrels per day in April.

Oil producers have responded by filling up storage tanks around the world, but they are rapidly running out of space. Forecasters think storage tanks worldwide will be full by early May. At that point, well shut-ins will become inevitable.

A federal intervention is a secondary factor in whether oil demand recovers. Far more important will be whether Americans decide to start driving and flying again.

The idea of a bailout has generated divisions within the oil industry. Some players are wary of accepting government stipulations. Others argue that producers who took on mountains of debt and burned through cash in better times have no business receiving a lifeline from the government.

"Propping up zombie E&PS is not a path to a healthier shale E&P industry," Arjun Murti, a ConocoPhillips board member, tweeted on Friday with the hashtag #NoOilBailout. E&Ps is a reference to exploration and production firms.

An oil bailout could be a political bargaining chip in stimulus negotiations to secure federal investments in clean energy, said Alex Gilbert, a fellow at the Colorado School of Mines’ Payne Institute for Public Policy. While a bailout for shale drillers is unlikely to change the industry’s emission trajectory, investments in infrastructure and electric vehicle support would green the economy.

"The direct impact on emissions will generally be limited due to oil production — it’s economic demand for oil that will be the emissions driver," Gilbert said.

Others were less sure.

Collin Rees, a senior campaigner at Oil Change International, noted that many of the oil industry’s woes predate the coronavirus. He cautioned that bailing out struggling companies would send a message to Wall Street that risky bets on fossil fuel companies still pay.

"So much of the idea of the fossil fuel industry — its inevitability, it will always be around, it will have the government to fall back on — that is what so much of its power in Washington and around the world is built on," Rees said. "That political signal is almost as important as the specific plans."