Here’s what Biden could include in his Paris climate pledge 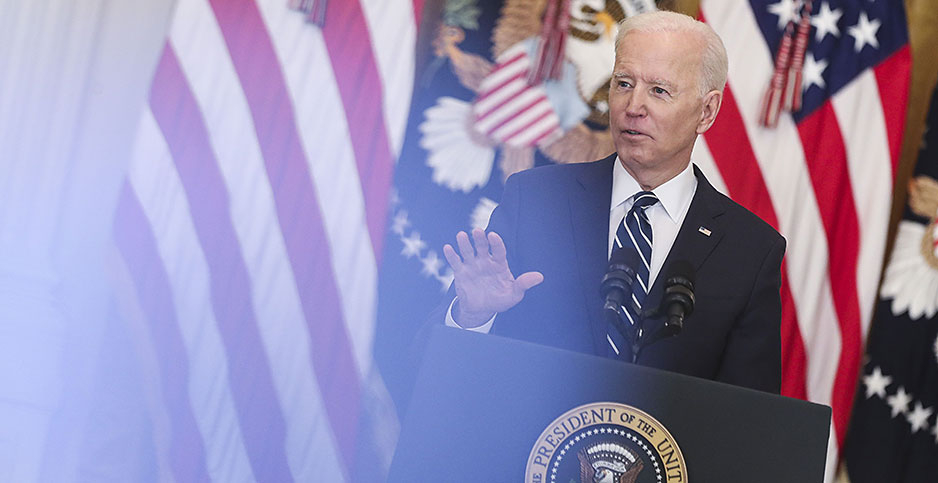 President Biden is preparing to announce a goal of cutting carbon emissions in half by 2030. CNP/AdMedia/Sipa/Newscom

The White House has three weeks left to make the world a new promise to phase down greenhouse gas emissions by the end of this decade.

President Biden has said his administration would release at least top-line numbers for a new U.S. commitment to the Paris Agreement by April 22. That’s when the president has asked world leaders to participate in a virtual Earth Day summit that will double as a coming-out party for renewed U.S. climate leadership in the post-Trump era. Among the 40 invitees are the heads of 17 countries "responsible for approximately 80 percent of global emissions and global GDP," according to the White House, as well as less wealthy nations that are vulnerable to climate change.

Economic modelers and environmentalists, meanwhile, are pressing hard on Biden for a 50% emissions cut commitment by 2030, compared with 2005 levels. That’s in line with what scientists say is necessary to achieve the most ambitious goals of Paris, and it tracks with the promise to decarbonize the U.S. economy by 2050 that Biden campaigned upon.

It’s not clear, however, how many details the White House will share — at least initially — about how the United States plans to get there.

The White House climate office, led by adviser Gina McCarthy, has told stakeholders it is crunching the numbers ahead of the April summit. But some observers expect a detailed communication to come out later this year in the run-up to an important summit in Glasgow, Scotland, in November.

There’s another wrinkle to the timing, too.

The fact that it’s a 2030 commitment gives the Biden team some wiggle room, insomuch that it can rely on actions later in the decade to deliver on its commitment to keep tons of carbon dioxide out of the atmosphere. President Obama, too, relied on subsequent administrations to deliver the nationally determined contribution (NDC) that he brought to Paris in 2015 and that promised 26% to 28% in emissions cuts by 2025.

The 2030 NDC also is likely to include reductions achieved by state and local governments, which tended the flame on climate action during the Trump administration. But it will take advantage, too, of different federally based strategies, from legislation to procurement, that contribute to climate mitigation.

Climate-related regulations are sure to play some role.

On his first day in office, Biden signaled he would rethink most of Trump’s regulatory rollbacks. One Biden executive order set a deadline of April 20 for agencies to send McCarthy and the White House Office of Management and Budget a list of regulatory actions that can be taken in the next four years to draw down emissions.

EPA’s new administrator, Michael Regan, has said work is underway at his agency on regulations to limit carbon emissions from power plants and vehicles — the two U.S. industrial sectors that contribute the most to climate change.

And Biden’s "Day One" executive order set a deadline of September for EPA to promulgate rules to control methane from new and existing oil and gas infrastructure — a tight deadline that may be made easier if congressional Democrats succeed in using the Congressional Review Act to invalidate a Trump-era rule exempting the sector from direct methane regulation.

A law enacted late last year also allows EPA to comply with the Kigali Amendment to the Montreal Protocol, which aims to phase down refrigerants and coolants that contribute to warming. A Biden climate change executive order — signed one week after Inauguration Day — gives OMB, the White House Council on Environmental Quality and the General Services Administration until the week after Biden’s Earth Day summit to submit plans for achieving a carbon-free power sector by 2035.

That was a pledge Biden made on the campaign trail, and it means the power sector must be 80% non-emitting by 2030. Experts who have modeled a potential 2030 NDC say that’s key to halving emissions this decade, because the power sector relies less on stock turnover than some other sectors that will shed emissions more slowly.

"I don’t think there’s that much wiggle room in how you get to 2030," said Robbie Orvis, director of energy policy design at Energy Innovation: Policy & Technology LLC, who has done modeling related to the NDC. "You just basically can’t have any [uncontrolled] coal generation."

While regulation represents the best opportunity for Biden — or any future Democratic president — to cut emissions, the NDC is likely to count on congressional action over the next nine years.

"They’re definitely thinking about regulatory actions but wanting to think much more broadly about what the policy platform is that goes well beyond just simple regulatory actions," said Nathan Hultman of the University of Maryland. Hultman is a former Obama White House official who has co-authored two analyses on the possible 2030 NDC.

The kind of congressional action the NDC might rely upon is unclear. A stringent economywide climate law that imposes a hefty price on emissions would allow the Biden team to assume deep emissions cuts, but it also would involve a leap of faith — especially given the current balance of political power in Washington.

Hultman and his University of Maryland co-authors modeled a policy set that included new legislation they viewed as plausible in the short term, such as infrastructure spending and a bipartisan extension of tax credits for renewables and carbon capture and storage technology.

The $3 trillion infrastructure proposal Biden plans to unveil Wednesday in Pittsburgh could surpass an Obama-era stimulus package to become the largest federal investment in clean energy ever. It also could make a substantial down payment on the NDC, together with spending decisions such as Biden’s commitment to buy only zero-emissions cars for the federal government’s extensive vehicle fleet.

Past U.S. commitments have balanced industrial emissions with sinks from forest and farmland. Here the United States enjoys an advantage that allows it to offset some of its emissions.

"It just so happens the U.S. has a sink — in other words, our forests are absorbing more than they’re emitting in many ways," Hultman said. "That’s not always the case for every country."

There are also steps the U.S. government can take to expand those sinks and make them more effective at capturing carbon. That would allow the United States to claim those reductions in the NDC.

Alex Rudee, who manages natural climate solutions for the World Resources Institute, said a federal push to restore tree cover could add up to 540 million tons of CO2 abatement a year by 2050.

"That’s scientifically one of the clearest-cut opportunities, and there have been opportunities for scaling, because we have all the technologies that we need to get all of those trees in the ground," he said.

Policies to improve the U.S. carbon sink abound. The Biden administration is said to be mulling the creation of a new carbon bank within the government-owned Commodity Credit Corp. to pay farmers to sequester more carbon in their soil.

And more details about Biden’s proposal to create a new Civilian Climate Corps are due out in April — and seem likely to be released ahead of the Earth Day gathering.