Here’s what Manchin told the Biden team on climate 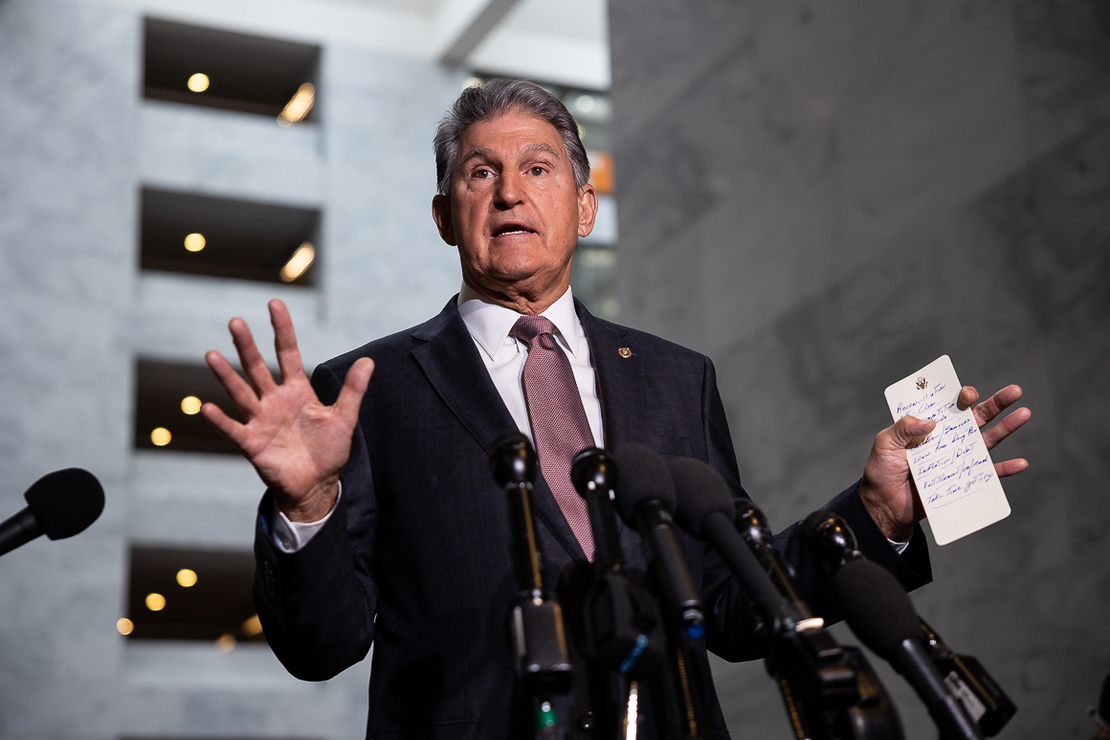 For weeks, the conservative Democratic senator from West Virginia said publicly that he didn’t support the signature climate provision in the Democrats’ $3.5 trillion reconciliation package.

Why pay utilities to install clean electricity, he argued, if they were doing it already?

It’s a message Manchin conveyed directly to the Biden administration two weeks ago in a previously undisclosed meeting. And it’s one that foreshadowed recent reports in The New York Times and The Washington Post that suggested Manchin’s skepticism would force the White House to abandon or scale back the program.

When Manchin met two weeks ago in a video conference call with Energy Secretary Jennifer Granholm and six utilities, he opened the gathering by asking the same question about paying utilities for installing clean electricity, said one person on the call who asked not to be identified so as to speak candidly.

The comment was telling. Due in large part to Manchin’s recalcitrance, the future of the Clean Electricity Payment Program (CEPP) — a $150 billion plan to pay utilities to install increasing amounts of clean electricity — is in serious doubt.

Without Manchin’s support, the program won’t pass the narrowly divided Senate. The impasse leaves Biden’s climate agenda in limbo and raises questions about how the administration plans to reach the 50 percent reduction in emissions the president hopes to achieve by 2030.

An analysis by Energy Innovation, a clean energy think tank, found that about a third of the emissions reductions in the $3.5 trillion reconciliation bill would be attributed to the CEPP. And without it, the United States will fall far short of its global climate pledges ahead of the international climate talks being held in Glasgow, Scotland, next month.

To be sure, there is no guarantee the CEPP would enable the United States to meet Biden’s climate goal because the program does not contain specific emission targets, said Zeke Hausfather, director of climate and energy at the Breakthrough Institute.

But America’s chances of hitting the target would be better with the program in place.

“Certainly losing CEPP and not replacing it with anything else significantly reduces our chances of achieving Biden’s 50 percent by 2030 goal,” Hausfather said.

Three other people, who also asked not to be identified in order to speak candidly, confirmed the meeting with Manchin, Granholm and the utilities.

Only Exelon, which boasts a large nuclear fleet, publicly backed the CEPP. The others have largely refrained from commenting publicly. Duke Energy has said it supports the concept but wants to iron out the details.

AEP, which operates three coal-fired plants in West Virginia, has been the most outspoken. In September, the company circulated a letter raising concerns with the CEPP, while leaving the door open to negotiations (Climatewire, Sept. 15).

The Ohio-based company has committed to greening its fleet of power plants but also plans on running several of its large coal plants into the 2040s. The West Virginia Public Service Commission last week approved a plan for West Virginia ratepayers to cover the costs of upgrades.

In a statement, AEP said it plans on increasing its renewable capacity 50 percent by 2030 and highlighted the importance of clean energy tax credits in another part of the reconciliation package.

"The tax credits will have the biggest impact on our ability to invest in the significant build out of renewable energy that we have planned," the company said. "We have supported clean energy standard proposals in the past and will continue to work with Congress and the Administration on policies that will accelerate the development of clean resources while supporting a reliable, resilient and affordable energy system."

The meeting involving the power companies, Manchin and Granholm did not turn into a negotiating session over the details of the CEPP, one source said. Granholm spoke about working together to find a solution. Her focus was plotting a rapid transition of the electric sector to cleaner electricity, one that would create jobs without jeopardizing reliability.

The utilities underlined their support for clean energy tax credits and raised the need to address transmission constraints and a bottleneck of new projects in grid operators’ interconnection queues.

Manchin, for his part, noted the Energy Department had ample tools to speed the transition of the country’s electric mix, and he offered to help the agency as the congressional appropriator with oversight of the agency’s budget.

But the senator showed no sign of supporting the president’s signature climate policy. Manchin is one of the largest recipients of campaign contributions from the fossil fuel industry in Congress.

Biden insisted Friday night that he’d secure a win, pushing back against U.S. climate envoy John Kerry who said last week that a failure to pass legislation before Scotland would be as bad as former President Trump pulling out of the Paris climate accord.

“It’d be good to have an agreement on the climate piece, but we’re going to get the climate piece,” Biden told reporters Friday night before returning to Washington from a trip to Connecticut. “I think Senator Kerry has a little hyperbole there.”

Sen. Tina Smith, a Minnesota Democrat who has championed the CEPP, warned in a Twitter post that she won’t vote for legislation without a strong climate component.

“I’m open to different approaches, but I cannot support a bill that won’t get us where we need to be on emissions,” she wrote.

Smith, who joined Granholm at an event in St. Paul, Minn., on Friday to pitch Biden’s spending plan, said she believes the CEPP is the most efficient method to curb emissions but noted that lawmakers are still negotiating.

"At the end of the day, we can’t lose track of what the big goal is, which is that we have policies in place that are going to reduce carbon emissions and put us on the forefront of the technology revolution," Smith said, according to the Star Tribune.

Granholm, who has championed the CEPP, credited Smith at the St. Paul event with helping to develop the proposal, saying the Minnesota Democrat "has been amazing at setting forth this particular plan as a way to incentivize the build-out of clean energy, to make sure it is enforceable and to put a goal on and that is exactly what the Clean Electricity [Performance Program] does."

American utilities have been the primary driver of U.S. emission cuts in the last decade. Power companies cut emissions 37 percent between 2005 and 2020, according to EPA data, as power companies retired coal plants in favor of natural gas and renewables.

Utilities are also planning a wave of new renewable installations.

A recent study by Lawrence Berkeley National Laboratory looked at proposed projects in seven regional interconnection queues representing about 85 percent of U.S. electricity demand. It found that 90 percent of the projects seeking interconnection were zero carbon.

But that finding comes with an important caveat: Only a quarter of projects seeking interconnection typically get built.

The study highlights the challenge facing the U.S. power sector. While utilities have made great progress slashing emissions and moving to clean electricity, they still fall short of the reductions called for in many deep decarbonization studies (Climatewire, July 12).

Robbie Orvis, senior director of energy policy design at Energy Innovation, said losing the CEPP would be a “really big loss.” But he noted the rest of the climate provisions in the reconciliation bill that are focused on cutting emissions — especially the clean energy tax credits — still could make substantial reductions in greenhouse gases.

Orvis estimated the share of clean electricity in the U.S. power mix would rise to 61 percent to 69 percent by 2030 with tax incentives included in the reconciliation package. That is up from around 40 percent today, but it falls short of the 80 to 85 percent of clean electricity that would be achievable with the CEPP, he said.

“If we were coming at this brand new, we’re talking about a set of policies for the U.S. that cuts emissions by a gigaton or more, we would be saying, ‘Wow, that on its own is the most significant piece of climate change legislation in history,’” Orvis said. “It’s not in line with the [nationally determined contribution], but it’s a huge step forward from where we’ve been.”