Here’s what U.S. can learn from Germany’s sunny grid 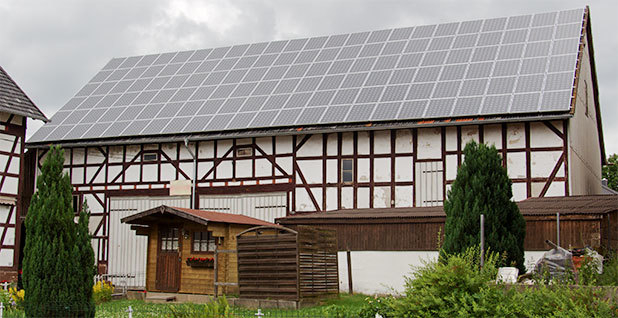 Solar homes have become ubiquitous in Germany, which has heavily promoted renewable energy through the use of feed-in tariffs. Photo courtesy of Wikipedia.

A report by a Berlin research institute said that on Sunday, May 15, Germany had generated just short of 100 percent of its electricity from renewable energy. It appeared to be an environmentalist’s dream come true. A surge of wind and solar power helped handle nearly all of the day’s power demands, and the grid hadn’t flickered. "Germany achieves milestone," said one headline.

But like many aspects of adapting electricity grids to cleaner energy sources, the milestones are still to come. First, the institute’s report was wrong. Later calculations showed the portion of electricity supply from renewable energy was around 82 percent, not a record.

And nobody was breaking out the Champagne in the boardrooms of Germany’s four major utilities, which have sustained big losses from market-churning events concerning renewable energy. Ever-cheaper wind and solar prices were, at times, forcing them to sell electricity at a loss to keep the power grid running. They were also turning familiar daily peak power demand times from profit-makers into money-losers.

In short, the electricity business seemed to be changing so fast that many traditional entrepreneurs were having trouble keeping up with it. German investors have reacted by dumping stocks of utilities that were heavy owners of conventional power plants. At one point this year, the stock value of one major utility, RWE AG, had dropped by half.

In a statement to the press, Peter Terium, chief executive of RWE, made what was happening sound more like a millstone than a milestone. "These power stations are costing us real money," he said.

Germany "will have to adjust their markets because they have such an aggressive uptake" of renewable energy, explained George Crabtree, director of the U.S. Department of Energy’s Joint Center for Energy Storage Research (JCESR), which is heavily involved in studies to update the U.S. power grid.

"They are concerned about the implications, but clearly, we can learn a lot from them," he said.

Crabtree referred to a recent DOE study showing that Germany, using a big financial incentive called a feed-in tariff, has encouraged more solar rooftop power than any other country in the world. It has also encouraged more power from wind turbine farms, biomass and other forms of renewable energy. One result is that the ownership of the country’s electricity production system has changed substantially.

In 2004, Germany’s four largest utilities owned 95 percent of its electricity generation assets. Now their share has dropped to 59 percent, while over 1,000 new electricity producers have emerged — not counting the hundreds of thousands of people who own rooftop solar arrays on their homes — to sell electricity from renewable sources. Together, they have flooded the country with an excess of generation capacity, sharply dropping wholesale electricity prices.

One result is that the major utilities have begun selling some of their power plants and concentrating more on producing their own renewable energy, including offshore wind operations. Because the average German household consumes about a third of the electric power that an American household uses, the impacts of the power shifts going on in Germany are likely to be more substantial if and when they reach the United States.

Compared with Germany, the United States is just approaching the escalating curve of business changes. Last year, Germany’s consumption of renewables hit a record: one-third of its electricity use. It had jumped almost 5 percent in one year, even as expensive government incentives began to phase out.

Last year, the United States consumed 13 percent renewable energy, about half of which came from hydroelectric power. Still, according to the DOE study, aspects of Germany’s power shift are spreading to California and Texas as they accelerate consumption of solar and wind energy.

The DOE study concludes that Germany’s rapid energy transition can happen in the United States if there is strong government policy and public support, but it warns that "costs are substantial and must be weighed against benefits."

According to Crabtree, some U.S. utilities are concerned about the German scenario.

"They’re worried that they’ll become dinosaurs and nobody will need them anymore," he said. But there are also U.S. homeowners with newly purchased solar rooftops who think they’ll have all the energy they need with a solar panel.

Crabtree predicts that emerging technology from the laboratories will add more drama to this confusion.

"Next-generation energy storage could meet the needs of transportation and the grid with a single dramatic innovation: batteries that deliver five times the energy density at one-fifth the cost," he said.

The upshot would make electric vehicles competitive with gasoline-powered cars, Crabtree predicts. "And they would make storing and releasing electricity on the grid just as cheap as generating it with natural gas turbines."

As in Germany, there will be outside entrepreneurs who think they can come into the electricity business with new innovations that can make money by resolving potential conflicts. Crabtree explains their mindset as: "I’ll come into your neighborhood and figure out who’s using electricity and when, and I’ll design a smart management system that just fits all your needs. … I’ll make money, and you’ll save money."

On the drawing boards for the evolving, more flexible power grid, there are opportunities for some of these people to form subsets called microgrids that are aimed at meeting one specialized need or another.

"We haven’t really seen that yet, but that could reasonably happen," Crabtree said. "That would put more pressure on utilities. They would think a lot more deeply about ‘How do I stay in business?’"

As Guenter Conzelmann, one of Crabtree’s fellow grid experts at Argonne National Laboratory, describes it, all the new players will need some joint success to make a cleaner, more flexible and durable power grid work. The utilities still own the power lines, and solar-equipped homeowners will still need them at times to keep their lights on. Cities, too, will need them to make sure that power is still distributed evenly, including to poorer neighborhoods that may not have solar arrays.

To figure out how to resolve the seemingly conflicting needs and keep prices down, there will be a need for more entrepreneurs to come into the evolving electricity market and compete with old business models. Conzelmann warns that the economic disruptions and financial impacts of these changes could be more widespread than many people think.

For decades, utility stocks have been a mainstay for retirement and institutional funds because of the conservative and seemingly unchangeable nature of the electricity business. Some shareholder funds in Germany have lost 75 to 80 percent of their value, said Conzelmann. "A lot of people lost a lot of money because these companies made the wrong business call," he said.

"We’re all searching for answers," Conzelmann said, referring to utility executives and energy researchers alike. "How do we help these guys maintain a sustainable business, at least for the time being?"

Nobody knows how many microgrids might emerge. The experts sometimes describe the problem they pose as the "democratization of the grid." Given the sprawling nature of the North American power grid, there could be thousands, perhaps millions of them.

‘We want to keep the lights on’

Currently, there are 20,000 electric power producers across America, estimates Conzelmann, who likes to use an analogy between the grid’s controllers and flight controllers whose job is to keep 20,000 airplanes a day flying safely. A newer, more resilient grid may have to handle millions of power producers.

Controlling that type of grid, he suggests, will be "a whole different ballgame."

Some could be for-profit businesses, such as companies that build battery storage facilities to store more cheap renewable energy and later sell it at a profit. Others may be military bases, such as Camp H.M. Smith in Hawaii, the headquarters of the far-flung U.S. Pacific Command. It wants enough local power to achieve uninterruptible service.

Still others will be public-private partnerships to help communities safeguard vital assets such as hospitals, police stations and airports by connecting them with local solar and wind power generators, electric vehicle parking lots, and other potential sources of emergency electric power.

The idea is to help make the grid more resilient and keep more critical assets running during extreme weather events, such as Superstorm Sandy in 2012, which darkened New York City and other cities along the East Coast. Commonwealth Edison, the utility that serves the Chicago area, is proposing to invest $300 million over five years to build a network of six microgrids in central Illinois. The proposal is pending before the state Legislature.

Argonne researchers are working with ComEd’s project and also with Alaska to see how microgrids might help sparsely populated communities tie into more local power sources. All of this presents major new communications and control challenges, Argonne researchers warn.

"That transition is going to happen, but you need to tie in all of these resources into the grid to be able to manage it," said Sreenath Gupta, an Argonne mechanical engineer. "Thankfully," he noted in a study, "innovation is driving costs down."

Bryan Hannegan, associate director of DOE’s National Renewable Energy Laboratory in Golden, Colo., said the power grid that can handle all of this will require hundreds of new inventions and control strategies. He is preparing a building there to help deal with innovators who want to join the expanding business of building a better power grid.

Not all utilities will immediately share their enthusiasm, Hannegan points out. "I’ve got this free new facility we’re building at NREL that is intended to fill the gap between the entrepreneur wanting an opportunity to test their idea and the utility that says, ‘Don’t bring me this untested stuff.’ We want to keep the lights on," he said.

NREL will offer what he calls a "middle ground," a lab where utilities can come in with a computer model of their particular section of the power grid and where innovators can try out various changes or additions they might make to it on a DOE computer, one of the fastest in the world.

Monday: The electric equivalent of the holy grail.