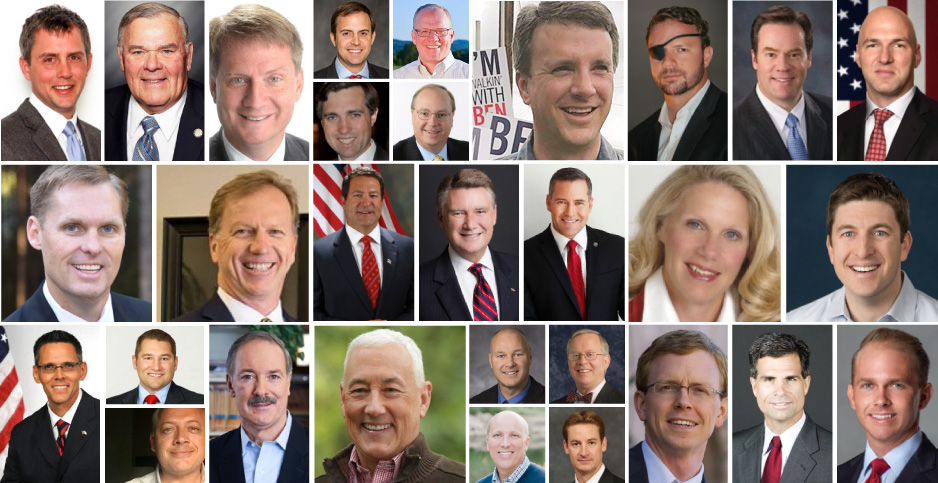 The incoming class of Republican freshmen in the House has varied views on climate change. Wikipedia; Ballotpedia

If they stay true to their campaign rhetoric, the class of freshman House Republicans won’t be leading any revolutions next year on the issue of climate change.

That said, environmentalists from both ends of the political spectrum said there’s the potential that a few of the 31 GOP freshmen could make an impact — either by allying with ongoing efforts to combat global warming or by gumming up the works in opposition.

"What we’re hoping for is that the new Republican members will find it easier to work together and find bipartisan solutions," said Craig Auster of the League of Conservation Voters.

There likely will be plenty of chances.

Next year, Democrats will control the House for the first time in eight years. Already their freshman class — led by Rep.-elect Alexandria Ocasio-Cortez of New York — has demanded that House leadership make climate change a top priority.

Whether their GOP counterparts go along is another matter, especially because most of the incoming Republican freshmen were elected from reliably red districts and not the swing districts that typically send GOP moderates to Washington.

"Clearly, there’s been a new push in the [freshman] Democratic class" to address climate change, Auster said. "I haven’t seen that on the other side yet."

In a few cases, there are reasons for climate activists to be cautiously optimistic.

Wisconsin voters picked Republican Bryan Steil to take the place of outgoing House Speaker Paul Ryan (R). During an October forum, Steil said, "I believe that climate change is real and I believe humans are a key component in that."

Down in Florida, Republican Rep.-elect Michael Waltz has argued that climate change poses a real risk to U.S. security. "We do need to — from a military standpoint, even a national security standpoint — deal with the effects of a warming Earth," Waltz said in a 2017 segment on Fox News (Climatewire, Sept. 10).

And Rep.-elect William Timmons (R-S.C.) has spoken positively of the benefits of solar power, even telling the Washington Examiner that he planned to get solar panels installed on a new home.

"I am working on building a little farm, and I just think it would be good to not have to call my local energy company to ask to turn my power back on during blackouts," he told the publication.

Set against these candidates, however, is the rest of the GOP freshman class.

Few, if any, of its members made climate change a main plank of their campaign platforms. And those who did often addressed global warming in an offhanded way.

A typical example is Rep.-elect Dan Crenshaw (R-Texas). His campaign website barely mentioned global warming, other than to applaud President Trump for withdrawing from the "costly and meaningless Paris Climate Agreement."

"That agreement was merely value signaling, not good policy," Crenshaw added. "We must use our money to develop better infrastructure, not engage in hopeless attacks on our energy industry."

Other incoming GOP freshmen have either denied the science of global warming or mocked climate activists.

One of those is Rep.-elect Mark Harris (R-N.C.), who defeated Democrat Dan McCready, a solar power investor.

Harris, a pastor, told The Charlotte Observer that he believes the Earth was created less than 10,000 years ago. He said during a recent debate that he doesn’t "necessarily buy into the fact that humans are responsible" for climate change.

During a cold snap last January, the incoming freshman Republican snarked on Twitter that "Al Gore needs to scrape my dadgum windshield" — a dig at the climate activist and former vice president.

Neither Harris nor Burchett responded to requests for comment.

The lack of obvious climate champions in the GOP freshman class isn’t surprising, given the outcome of the midterms.

The blue wave that swept about 60 freshman Democrats into the House brought half as many new Republicans.

And the Democratic victories often came at the cost of right-of-center Republicans, such as Rep. Leonard Lance of New Jersey.

His loss means the next session of the House will seat just one of the eight Republicans — Rep. Chris Smith, another New Jersey lawmaker — who voted in 2009 for a carbon cap-and-trade measure known as Waxman-Markey. The others are gone.

Similarly, the bipartisan Climate Solutions Caucus saw its Republican ranks decimated in the election. It is uncertain how many freshman GOP lawmakers will take their place.

That double whammy could make the House GOP, on average, more hostile to efforts to address climate change.

But Alex Flint of the conservative group Alliance for Market Solutions said there are a few reasons to be hopeful about GOP support for climate change legislation.

Environmentally conscious Republicans such as Reps. Brian Fitzpatrick of Pennsylvania and Francis Rooney of Florida are returning to Congress next year and have already taken steps to move forward with new carbon fee legislation — an approach favored by the Alliance for Market Solutions.

Flint also said that a Democratic-controlled House is more likely to address climate change in a meaningful way, either through legislation or with hearings, and that could give GOP freshmen a chance to weigh in.

"I think Republicans are going to feel more pressure to engage on this, and there will be more opportunities for reasonable Republicans to participate," Flint said.