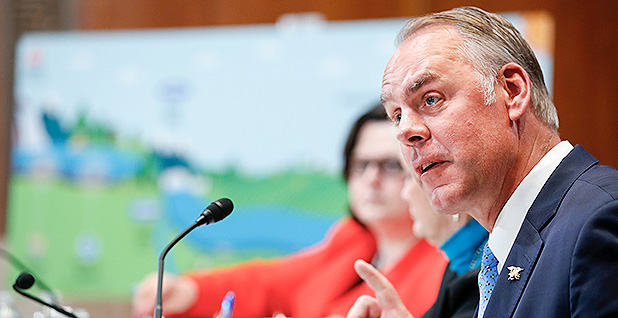 With a brisk Capitol Hill exchange yesterday, Zinke illuminated the subtlety of words, the practice of spin and, not least, the crucial importance of a job opening he must try once again to fill.

And it all unfolded in under two minutes, toward the tail end of a long budget hearing, when Sen. Chris Van Hollen (D-Md.) pressed Zinke about the department’s recast legal opinion that the MBTA covers intentional but not incidental "take" — harm or killing — of migratory birds.

"The change to the Migratory Bird Act had to do with ‘accidental,’" Zinke said. "Now, what does that mean? Let’s say an oil company [employee] is driving on a road in Montana and hits a bird in the windshield, accidentally. Now, should that individual be held criminally liable?"

The answer, of course, is "no," Zinke added, referring to a legal opinion rendered in December by Interior’s solicitor office (E&E News PM, Dec. 22, 2017).

Van Hollen objected, noting that "there’s been no case in the United States, ever, that’s been brought in that kind of situation." The civil but pointed conversation then moved on, leaving behind some key questions that start with teasing apart any distinction between "accidental" and "incidental."

There is a difference, and it matters. Zinke’s focus on a heavy-handed if theoretical prosecution for an accidental take minimizes the real impact of the controversial MBTA reinterpretation, critics believe.

"A driver hitting a bird could be called accidental, but an oil company leaving an oil pit uncovered after thousands of birds have died there certainly is not," Jason Rylander, senior staff attorney with Defenders of Wildlife, said in an interview today.

Instead, Rylander called the "killing of birds by industries like the oil and gas industry" an "incidental" take: something, he said, that is both unintentional and "entirely foreseeable and expected to occur."

The MBTA, first passed in 1918 and amended several times since, prohibits the unauthorized taking of roughly 1,000 species of migratory birds. Its language, though, leaves some room for interpretation (Greenwire, Nov. 22, 2017).

Some observers have contended the law covers killing that is an "incidental" consequence of other activities, regardless of the intentions.

In 1998, for instance, the Moon Lake Electric Association Inc. in Colorado was charged with taking 12 golden eagles and other birds that had regrettably perched on electric power poles. The trial judge reasoned that "the MBTA does not seem overly concerned with how captivity, injury, or death occurs." Other courts have disagreed.

In January 2017, at the end of the Obama administration, Interior Solicitor Hilary Tompkins issued an opinion that the MBTA covers "take that is incidental to industrial or commercial activities," as well as intentional acts like poaching.

"’Accidental’ is almost irrelevant to the analysis, because we weren’t prosecuting take cases involving a bird flying into a windshield," Tompkins said in an interview today.

Even the incidental take coverage, Tompkins added, could count more for environmental leverage than for law enforcement.

"Having incidental take on the table would create a platform for the Fish and Wildlife Service and the industry to find ways to minimize take and undertake certain practices," Tompkins said, citing as an example "companies being incentivized to net their oil-and-gas pits."

Last December, Interior’s new attorneys reversed course and determined that the MBTA covered only the intentional taking of a bird.

Tellingly, in its Dec. 22 legal opinion, the Interior’s solicitor’s office used the words "incidental" and "accidental" as if they referred to two distinct scenarios.

"Interpreting the MBTA to apply to incidental or accidental actions hangs the sword of Damocles over a host of otherwise lawful and productive actions, threatening up to six months in jail and a $15,000 penalty for each and every bird injured or killed," the opinion stated.

The revised MBTA opinion was authored by Principal Deputy Solicitor Daniel Jorjani, the office’s senior attorney in the absence of a Senate-confirmed solicitor.

Zinke must find a new solicitor candidate, with the announcement yesterday that prior nominee Ryan Nelson has withdrawn and instead has been nominated to a seat on the 9th U.S. Circuit Court of Appeals (Greenwire, May 10). And while the MBTA tussle has so far taken place without a Trump administration solicitor, it’s underscored the importance of a post where words make a difference.

"They set the legal policy of the entire department, so it’s a big job, a big responsibility," Tompkins said. "Whoever comes into the job needs to be prepared and astute on all of those issues."