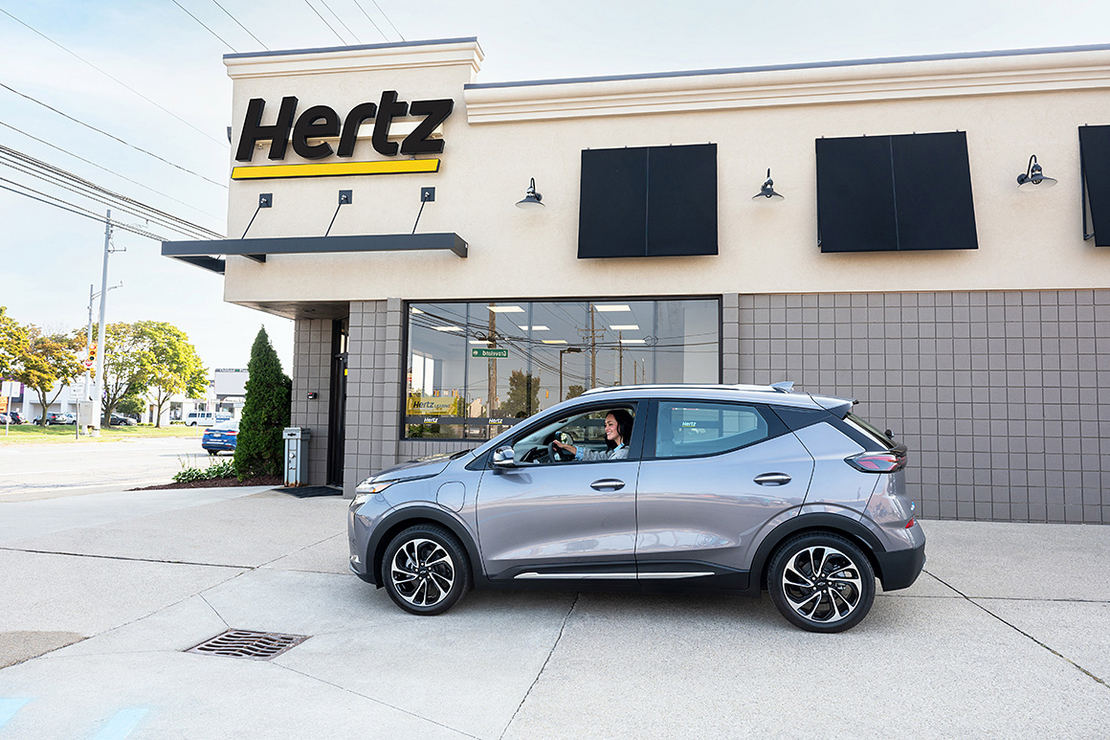 Rental car company Hertz Corp. said on Tuesday that it would deploy up 175,000 electric vehicles made by General Motors Co. into its nationwide fleet. General Motors

Car rental company Hertz Corp. made its biggest bet yet on electric vehicles Tuesday with a commitment to buy up to 175,000 of them from General Motors Co.

These EVs — if Hertz can actually get them — could get many Americans behind the wheel of an EV for the first time and supplement cars entering the company’s fleet from Tesla Inc. and Polestar. But Hertz could get the blame from its customers if the charging experience goes awry.

“I think they need to give some serious thought to how they are going to charge them,” said Joel Levine, the executive director of Plug In America, a nonprofit that promotes EVs for regular drivers.

The adoption of EVs by rental companies is important because the sector’s vehicles are such a hefty slice of the American driving experience.

The companies have purchased more than one in 10 cars in the U.S. over the last decade, and those vehicles make up a quarter of all miles traveled, according to the American Car Rental Association (ACRA), which represents most of the country’s rental agencies.

The move places Hertz Global Holdings Inc., as the company is formally known, far ahead of competitors in the electrics race. Both of its main U.S. rivals, Enterprise Holdings or Avis Budget Group, says they have big EV plans but have revealed few details. Hertz is the premium brand of a company that also includes the cut-price labels Thrifty Car Rental and Dollar Rent A Car.

In its last annual report, Hertz told its investors that its EVs are a moneymaker because the vehicles can be offered at a premium price, cost less to maintain and hold their value better than combustion cars, meaning they can be sold after a few years at higher prices.

The deliveries will start early next year with two EV models that GM is already making, the Chevrolet Bolt, a compact, and the Bolt EUV, a small SUV. Thereafter and through 2025 will come a succession of new models from GM brands including Chevrolet, Buick, Cadillac and even BrightDrop, the automaker’s new electric van division.

The vision dovetails nicely with GM’s plans. At the North American International Auto Show in Detroit last week, GM unveiled the Chevy Equinox, an entry-level SUV that could start at $30,000, and is the first of an expected stream of other mainstream EVs.

The deal with Hertz will “help create thousands of new EV customers for GM,” said CEO Mary Barra in a statement.

That fact was called out by Stephen Scherr, Hertz’s CEO. “It’s exciting that two iconic American companies that have shaped the evolution of transportation for more than a century are coming together to redefine the future of mobility in the 21st century,” he said.

According to Hertz, the vehicles could within the next five years drive about 8 billion miles and avoid the emitting of 1.8 million tons of carbon dioxide that would have been burned if they had run on gasoline.

But first, the problem “is just getting your hands on the damn things,” as Sharky Laguana, the president of the American Car Rental Association (ACRA), told CNBC this summer.

As anyone knows who has tried to buy an EV this year, they are hard to find. A combination of a computer-chip shortage, pent-up desire for new cars after the Covid-19 pandemic and a surge of consumer interest in electrics have wiped dealerships clean of the few EVs that automakers have actually been able to make.

Hertz is behind on an earlier commitment, made last October, to buy 100,000 Teslas and have them on the road by the end of this year. That was followed in April by news of a deal with Polestar, a Swedish-Chinese brand, for 65,000 vehicles.

Shortly after the Tesla deal was announced, cold water was thrown on it by none other than Tesla’s CEO, Elon Musk, who said in a tweet that “no contract has been signed yet” and that “Hertz deal has zero effect on our economics.”

In an email Tuesday, a Hertz spokesperson said that Hertz has “tens of thousands of EVs in our fleet” but declined to say in in what exact numbers or models. In its last annual report, Hertz said that Tesla vehicles made up 10 percent of its vehicles, while GM comprised 35 percent.

There also is the challenge of charging, which is a source of dissatisfaction for many EV drivers (Energywire, Jan. 4).

Tesla vehicles are easier to refuel because Tesla’s exclusive Supercharger network is highly dependable, said Levine. But for other models, “you’re out on the public network, which right now is a pretty mixed bag.”

Having enough infrastructure to support the charging of EVs is a growing concern for the rental industry.

Those worries can be found in comments the industry has made to the Biden administration as it begins to spend $7.5 billion on EV infrastructure, part of the bipartisan infrastructure bill that passed last year.

ACRA pointed out in its letter that more than half of those who rent cars drive beyond the range of a single charge, meaning there’s no other option than to rely on public charging networks.

Furthermore, rental agencies are preoccupied with the “concentration of electricity that will be needed to charge hundreds or thousands of rental vehicles at our nation’s airports — where approximately 50 percent of daily car rentals take place,” ACRA said in its comments.

In its own filing, Hertz said that it has installed more than 1,400 chargers at its facilities, and that another 2,600 are on the way next year.

GM could be an appealing partner because of its plan, struck with charging provider EVgo Inc., to build 2,700 fast-charging stations across the country by 2025 (Energywire, Aug. 21, 2020).

The ability to get EVs, and to charge them, appear to be on Hertz’s mind. In its last annual report, the company listed among its risks “the inability to secure” the vehicles “within the time frame we, and our customers, expect; a potential lack of adequate infrastructure to support EVs,” as well as “negative publicity” from failing on either count.

Correction: Due to incorrect information provided to E&E News, the original version of this story misstated the tons of carbon dioxide that Hertz electric vehicles would have traveled in the next five years if they had run on gasoline.