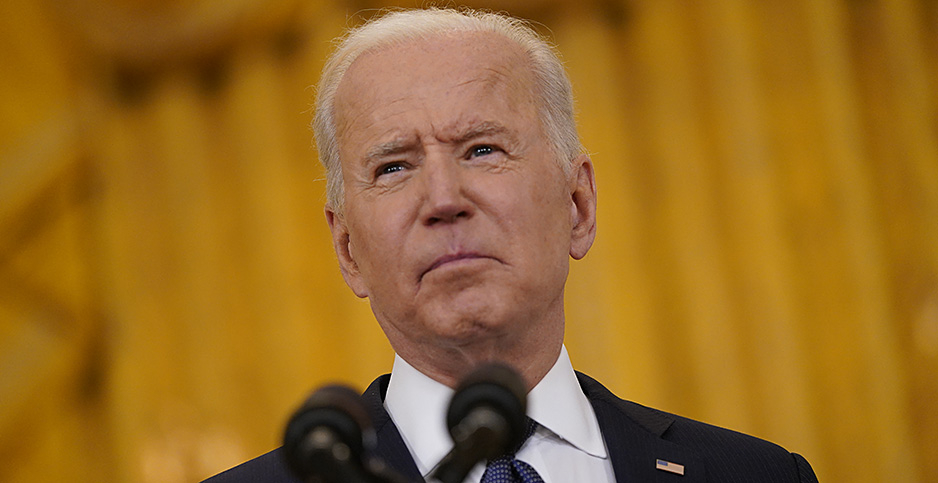 President Biden delivers remarks on the economy in the East Room of the White House. Chris Kleponis/CNP/Polaris/Newscom

A surprise slowdown in U.S. job growth is casting a shadow over crucial infrastructure negotiations this week.

President Biden will huddle several times in the coming days with key lawmakers as both parties assess the potential for a bipartisan deal. The White House is considering a $570 billion proposal from Sen. Shelley Moore Capito (R-W.Va.) that would drop almost all of the climate provisions Biden had proposed in his own $2.2 trillion package.

But weaker-than-expected April jobs numbers have sent both sides to their corners. The U.S. added 266,000 jobs last month, well below economists’ expectations and weaker than March’s 770,000 jobs.

Biden and Democrats say the slowdown demonstrates how bruised the economy remains from the pandemic, and the remedy is more stimulus spending. But Republicans see the same jobs data as reason to block Biden from funding infrastructure through corporate tax increases.

Some conservatives have also started pointing to inflation as a reason to fight Biden’s spending plans. Biden’s last major legislation on the pandemic, they say, sowed the seeds of this hiring slowdown by pumping too much money into the economy and making unemployment benefits too good.

Taken together, those economic views complicate a potential deal.

Biden yesterday downplayed the significance of the jobs report. It was already outdated, he said, because it surveyed a week in April when vaccination rates were much lower and COVID-19 infections much higher.

"Let’s be clear, our economic plan is working," he said, noting that the U.S. added more jobs in his first 100 days than any of his predecessors’ opening months.

"I never said, and no serious analyst ever suggested, that climbing out of the deep, deep hole our economy was in would be simple, easy, immediate," Biden said.

"So some months will exceed expectations, others will fall short. The question is what is the trend line? Are we headed in the right direction? Are we taking the right steps to keep it going? And the answer clearly is yes," he said.

He outlined new steps his administration would take to accelerate stimulus programs, like releasing guidance for states to use federal child care funds. Even as he dismissed GOP arguments about unemployment benefits, he emphasized the program’s limits.

And he redoubled his emphasis on his infrastructure plan as a large employment package.

"The American Rescue Plan is just that, a rescue plan," Biden said, referring to the pandemic relief legislation he signed in March.

"It [was] to get us out of the crisis and back on the track, but it’s not nearly enough," he said. "That’s why we need the American Jobs Plan, which is an eight year investment [in infrastructure]"

Republicans were already opposed to raising taxes to pay for infrastructure, and some had already been warning of the inflationary potential of big spending. Those arguments are now growing louder.

Some measures of inflation have ticked up in recent months. The consumer price index rose 0.6% in March, the steepest rise since 2012. The New York Federal Reserve said yesterday that consumers expect this year’s inflation to reach 3.6%, a rise of 0.2 percentage points over last month.

But some policymakers see that as a feature, not a bug. Inflation is historically associated with rising employment; more jobs means more dollars bidding over limited goods, thereby driving up prices, according to conventional economic theory.

But in this case, Republicans are pointing to rising costs as a kind of tax. Biden has vowed not to raise taxes on anyone earning less than $400,000 a year, but it’s the poor who suffer the most from rising costs, conservatives say.

"Every person who hears us today, when you go out to fill your gas tank, and you notice that you’re getting less gasoline per dollar, that’s a Biden hidden tax," former House Speaker Newt Gingrich said Sunday on Fox News.

"So, they get a bad jobs number on Friday, and they’re saying immediately, ‘Oh, we need to spend another couple trillion,’ which is exactly the wrong solution if you want the economy to be healthy," he said.

Federal Reserve Chair Jerome Powell has said reaching full employment is more important than controlling short-term inflation. The Fed has said it plans to let inflation exceed its 2% target to offset years of undershooting that benchmark and to promote full employment.

Some progressives, meanwhile, have argued that the pandemic’s disruptive effect on prices has skewed the year-over-year comparisons used to calculate inflation, creating the illusion of it rising faster than it is.

"The annual inflation rate will look high on paper, but what it is really showing us is deflation in 2020, not inflation in 2021," the Roosevelt Institute wrote in a paper published last month.

"Even if inflation is a genuine problem, scaling back infrastructure investment is not the solution," the institute said. "It might even make the problem worse."