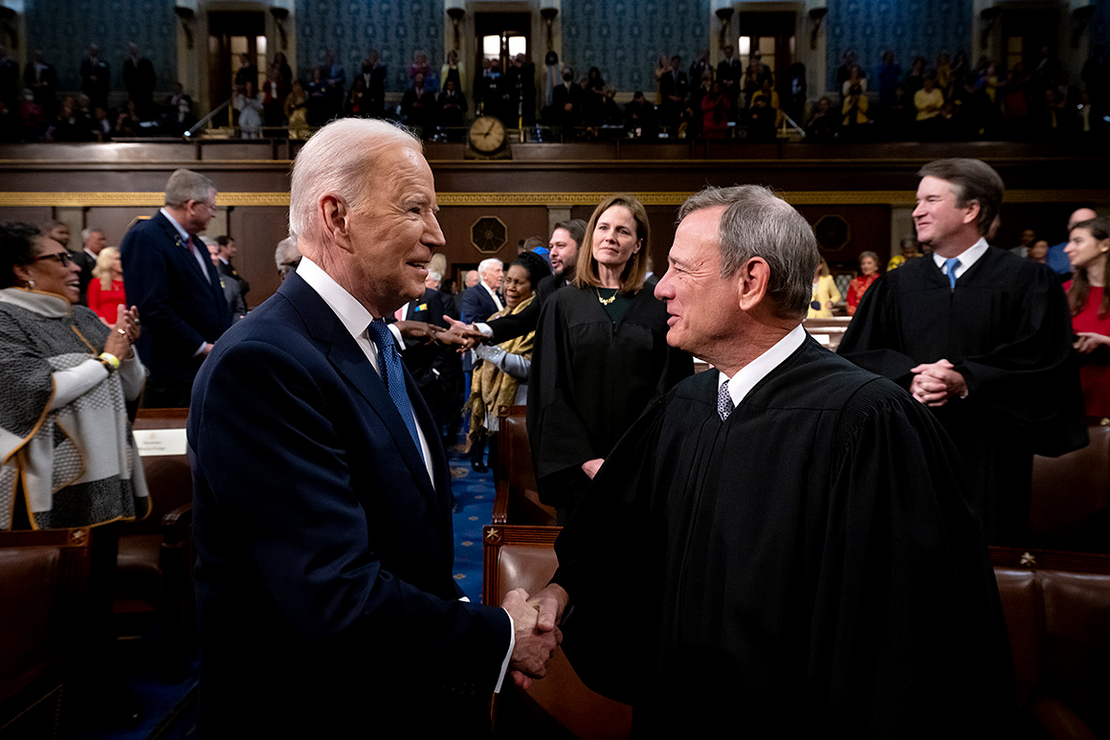 As the White House considers whether to declare a climate emergency, Biden administration attorneys are likely weighing the legal peril that could accompany the move.

Activists have prodded Biden to go even further by declaring a formal climate emergency and unleashing greater executive powers. The president told reporters as he returned to Washington on Wednesday that he was “running the traps on the authority that I do have” and “will make a decision on that soon.”

But one big question looms: How would the Supreme Court’s newly empowered conservative majority treat a climate emergency declaration?

“What the Supreme Court will and will not allow in the fight against climate change is a big open question,” said Michael Gerrard, a professor at Columbia University Law School.

Courts have historically given presidents leeway when it comes to declaring national emergencies, legal observers say.

But the Supreme Court’s 6-3 ruling last month in West Virginia v. EPA, which curbed the federal government’s authority to regulate carbon pollution from power plants, is seen as a signal that a proclamation of a climate emergency would face skepticism from the court’s newly bolstered conservative wing (Climatewire, July 15).

Discussions are already swirling about the legal fights that could result from a potential climate emergency declaration. Any such lawsuit has the potential to make it all the way to the Supreme Court.

Republican-led states are already challenging a Biden executive order that put a new price tag on the societal harms of greenhouse gases, as well as other efforts by the administration to address planet-warming emissions.

Action that the president could take under an emergency declaration, such as reimposing a crude oil export ban, would likely be challenged (Greenwire, July 19). And Kathleen Sgamma — president of the Western Energy Alliance in Denver, which already has a lawsuit pending against the Biden administration over its leasing ban — told E&E News earlier this week that a climate declaration that sought to trim back federal oil and gas would run into the same legal hurdles (Energwire, July 20).

David Bookbinder, chief counsel at the Niskanen Center, said he suspects that the Supreme Court, which doesn’t take every case that comes its way, would welcome the chance to consider a challenge to a Biden climate emergency declaration.

“The Supreme Court will unquestionably take it,” he said.

In the West Virginia EPA climate case, the court’s six conservative justices showed “hostility to climate policy and, secondly, skepticism about delegations of power from Congress to the executive,” Bookbinder said. A challenge to a climate emergency declaration, he added, “calls up both of those.”

Bookbinder represented challengers to former President Donald Trump’s 2019 emergency declaration to secure money for a border wall, which Trump said was needed because of an immigration emergency (Greenwire, Nov. 13, 2019).

But Bookbinder predicted that the Biden administration could have trouble making the case that climate change is indeed a national emergency.

“It will be challenged by somebody on the grounds that climate is not an emergency,” Bookbinder said. “Emergency is generally defined in dictionaries as sudden and unforeseen. Climate change is not sudden, we’ve had it for decades, and it wasn’t unforeseen. What makes it an emergency now?”

While Biden’s team has said a climate emergency is under consideration, the president hasn’t yet declared one. Some have suggested that legal questions could be one reason for the delay.

“It makes sense to be careful and make sure that you lay the right groundwork before you take a major executive action so that you can defend it when it’s challenged,” Sen. Martin Heinrich (D-N.M.) told reporters Wednesday on Capitol Hill.

White House climate adviser Gina McCarthy, who was asked this week about the risk of overstepping presidential authority with an emergency declaration, told reporters that Biden “wants to make sure that we’re doing this right, that we’re laying it out and that we have the time we need to get this work done.”

Noting that she’s “not a lawyer,” McCarthy declined to say whether the White House believes an emergency declaration could be applied to climate.

But she added that the president “has broad authority in these areas, and he’s going to utilize the authorities he feels most appropriate.”

The fact that the Biden administration is publicly considering a climate declaration has energy and environmental lawyers studying up on the National Emergencies Act, which governs the president’s ability to exercise special powers during a crisis.

Legal challenges to the administration’s Covid-19 policies, including vaccine mandates and an eviction moratorium, could contain hints on how the courts would approach the issue, said Dan Farber, a law professor at the University of California, Berkeley.

The Biden team will likely consider how lawsuits against presidential actions in times of crisis might “limit what they could do with an emergency declaration,” Farber said.

“I think courts may be somewhat reluctant to rein in the use of the National Emergencies Act,” Farber said. But, he added, “some of the justices might think that a climate emergency is a little fishy.”

He said he suspects that attorneys general in GOP-led states would make arguments similar to the ones they made in the West Virginia climate case, in which they contended that EPA under former President Barack Obama had overstepped its authority by issuing sweeping regulations to curb emissions at power plants.

The court, which found in the West Virginia decision that EPA had violated the “major questions” doctrine when it issued the Clean Power Plan, invoked nearly the same reasoning in January when it blocked the Biden administration’s workplace Covid vaccine-or-test mandate.

In a 6-3 decision, the justices said Congress hadn’t clearly authorized the Occupational Safety and Health Administration to issue a mandate on a matter of such “vast economic and political significance,” constituting a violation of the major questions doctrine.

Similarly, the Supreme Court last August lifted a federal ban on Covid-related evictions, finding that the Centers for Disease Control and Prevention did not have the authority to enact the policy (Greenwire, April 11).

West Virginia Attorney General Patrick Morrisey, the Republican who led the Supreme Court challenge to the EPA power plant rule, greeted Biden’s remarks this week that he will view climate as an emergency with a warning.

‘Swirl of conflict and litigation’

Environmental groups have long pressed Biden to issue a climate emergency declaration and have stepped up the call in recent days as Manchin wavered on Biden’s climate plans.

Jean Su, energy justice director and senior attorney at the Center for Biological Diversity, told reporters on a Wednesday call that an emergency declaration could serve as a “rallying directive in this vacuum of climate leadership that we’re seeing right now.”

But some environmental attorneys warned the legal battle may not be worth it.

Bookbinder, who was previously Sierra Club’s chief climate counsel, wrote in a 2020 blog post that aside from the “advisability of Trump as a role model for presidential behavior,” when it comes to emergency declarations, he questioned how much a proclamation would actually achieve.

“The National Emergencies Act is not a great provision,” he said this week, noting that he wrote in 2020 it would “doubtless be a big media moment,” but he is still not convinced it would do much to reduce emissions.

Jody Freeman — founding director of Harvard Law School’s Environmental and Energy Law Program and a former Obama White House energy and climate adviser — urged Biden to focus on “smart, effective regulatory actions, rather than getting sidelined into a swirl of conflict and litigation.”

Freeman said on Twitter she recognized the political appeal of declaring a climate emergency but said the value would be limited. EPA and the Department of Transportation can already regulate transportation-related emissions, and the government also can already help spur new technology, she noted.

Declaring a national climate emergency would allow Biden to divert military construction funding to projects that harden the military against climate-related threats, Freeman said, as well as spur production of batteries and other green technology through the Defense Production Act. The president could also restore the oil export ban, she said.

But, she wrote, each step would be “likely to be heavily opposed and litigated.”

Jonathan Brightbill, who served as principal deputy assistant attorney general of the Justice Department’s environment division under Trump and worked on the border wall declaration, said litigation would stem from steps Biden would take under a declaration — not the declaration itself.

“The more interesting question is less whether he declares a climate emergency, but what he does with that power,” Brightbill said, adding that in the case of the immigration declaration, it was difficult for parties to prove they had been injured. That step is essential to establishing a litigant’s standing to file a lawsuit.

“When the president made the determination there was an emergency on the U.S.-Mexico border and freed up money to facilitate more rapid construction of the border wall, there weren’t many who could credibly claim injury, who had standing to sue,” said Brightbill, now a partner at Winston & Strawn LLP. “Whereas if the president declares that there will be no more domestic exports of crude oil, there are going to be entities claiming injury from that.”

Brightbill said he believes the climate declaration’s influence would be limited — though Biden could steer already-authorized money to priority areas for the administration, such as wind and solar projects.

“Based on my experience, if they declare a climate emergency, the primary thing they will do is get money to people,” he said. In Trump’s case, he noted, “more miles of wall were able to get built … but it wasn’t entirely transformative.”