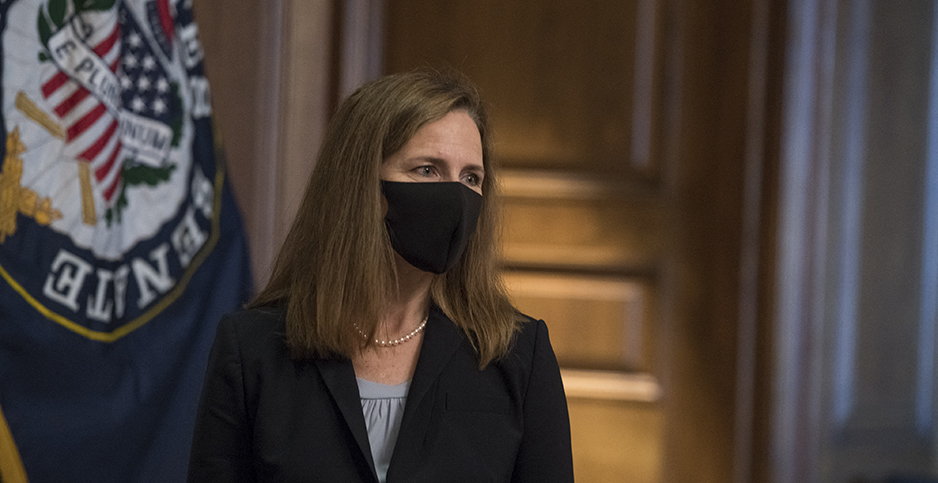 President Trump might not win the November election, but he could still strip his opponent, Joe Biden, of a dominant tool to limit greenhouse gases.

The Supreme Court and its reshaping by Trump, who is verging on his third appointment of an anti-regulatory justice, would be a warning to Biden to rely less on the Clean Air Act to reduce emissions of carbon dioxide and other gases.

Expansive readings of the landmark environmental law — like the one EPA used to regulate the power sector under President Obama — are unlikely to pass muster with the court’s likely 6-3 conservative majority.

That would be a problem for former Vice President Biden, who has offered the most ambitious climate change platform in the history of U.S. presidential elections.

While the moderate Democratic nominee has stressed that he doesn’t support the Green New Deal put forward by the progressive wing of his party, his own plan calls for a carbon-neutral power grid by 2035. The economy as a whole would follow 15 years later.

That’s a dramatic change from Obama’s targets. His Clean Power Plan, the centerpiece of Obama’s second-term Climate Action Plan, sought to cut power plant carbon by a comparatively modest 32% compared with 2005 levels by 2030.

The last pledge that Obama ever made to the United Nations, during the Morocco climate summit in 2016, was an 80% economywide carbon reduction by 2050.

While Obama’s targets were more modest than Biden’s — a sign of how global climate politics has evolved in the last four years — his administration hoped to achieve them by testing the boundaries of the Clean Air Act, rather than passing legislation.

Take the Clean Power Plan. The 2015 rule was written under a section of the Clean Air Act that requires EPA to establish a "best system of emissions reduction" for a certain source category — in this case, existing coal- and gas-fired power plants.

Obama’s EPA interpreted that to mean a rule that went beyond the fence line of an individual fossil fuel power plant, in part to encourage states and power providers to reduce carbon elsewhere along the grid. That was meant to increase the use of carbon-free power, like renewable energy.

Judicial review of the rule was in progress before Trump took office and the work of dismantling it began. The Supreme Court took the unusual step in February 2016 of staying the Clean Power Plan’s implementation as it moved through lower courts.

Critics say that likely signaled that the justices had deep reservations about the rule.

Since then, the courts have moved to the right in a way that would make the reintroduction of a similar mandate under a potential Biden administration almost an exercise in futility, according to experts.

As the GOP-controlled Senate rushes to confirm Judge Amy Coney Barrett to the seat once held by the late Justice Ruth Bader Ginsburg before the next presidential inauguration, it is clear that the era of ambitious Clean Air Act climate rules is over.

"If the Biden administration were simply to reinvigorate a souped-up version of the Clean Power Plan, I think that that would almost certainly be struck down in the Supreme Court," said Jeff Holmstead, a former EPA air chief who is now a partner at Bracewell LLP.

With the likely confirmation of Barrett to the court, he said, "now you have another clear vote against that kind of sort of regulatory imperialism."

"If eventually it is challenged in court, the challenge won’t be about whether the agency had too expansive an interpretation of the law," he said. "But would focus on technology issues where I think even a conservative judiciary would be likely to defer to the agency."

Goffman, who helped oversee the development of the Clean Power Plan, said it was too early to guess what ambitious inside-the-fence-line regulations would look like.

"But it’s a little easier to speculate that the agency would look there first rather than to something that would be perceived by the court as an overly creative reading of the statutory language," he said.

One way to get deep carbon reductions from power plants is through carbon capture and storage. There’s still a law on the books — for now — that mandates partial CCS for new coal-fired power plants. The Trump EPA has proposed a revision, but it hasn’t been finalized.

But the section of the Clean Air Act that the Obama EPA used to regulate power plant carbon — and that the current administration used for its replacement rule, finalized last summer — demands that technologies meet a standard of cost and technological feasibility.

Mandating carbon capture for existing power plants might be a heavy lift with states, the industry and the courts — especially now that Petra Nova, the only existing U.S. coal-fired power plant to be retrofitted for CCS, has been mothballed.

David Bookbinder, chief counsel to the Niskanen Center, said Trump’s success in undoing Obama-era climate rules and the rise of a conservative court both demonstrate the pitfalls of relying on the Clean Air Act to support climate regulation — at least for stationary sources.

"No matter who is president and who is in Congress, the Clean Air Act is not a very effective means for going after CO2 emissions from smokestacks. It just isn’t," he said. "You could have 60 Democrats in the Senate and [Democratic New York Rep. Alexandria Ocasio-Cortez] as president and that doesn’t mean a damn thing in terms of the Clean Air Act, unless they were to change the whole act."

A Biden EPA would have to substitute Trump’s Affordable Clean Energy rule for something that looked tougher, he said. One way would be to combine coal- and gas-fired power plants into a single source category and mandate that coal plants meet the same emissions performance as gas.

But Bookbinder and others said the most effective way of hastening the retirement of existing coal-fired power plants might be to double down on Clean Air Act and Clean Water Act rules for coal ash, effluent, fine particulate matter and other associated pollution rather than relying on rules with a carbon label.

Biden’s agency could also promulgate first-of-their-kind rules for petroleum refineries, steel production, pulp and paper mills, and other heavy emitters in the manufacturing space, he said.

"But ultimately, to do systemic change, you need legislation from Congress," Bookbinder added.

"If Congress passes legislation, then there would be no question, as long as EPA’s actions were consistent with Congress’ grant of authority," he said. "I think they will make sure that agencies live within the bounds that Congress has set."

Possible candidates for bipartisan legislation run the gamut from a green energy stimulus in response to the COVID-19 crisis to a clean energy standard. Several states already have such a standard, including some that lean Republican.

But Bookbinder, whose organization aggressively backs a carbon tax, said a Democratic Senate could easily move a tax as part of budget reconciliation with a simple majority of the vote.

Barry Rabe, a senior fellow at the Brookings Institution, noted that writing regulations under existing law involves a substantial investment of time and opportunity cost.

"We’ve been at this issue for some time about how to reinvent the Clean Air Act and apply it to climate. And events of recent years show it’s very time-consuming, it has lots of uncertainties to it, and it can disappear," he said.

The Clean Air Act was last reauthorized 30 years ago — more than a decade before the Supreme Court case Massachusetts vs. EPA established that EPA was obligated to use the air law to address climate change.

"Legislation can breathe and adjust and be reinterpreted, but at some point, you probably have to go back to the legislative drawing board," said Rabe, "especially if you’re thinking of taking on a massive issue like climate change."