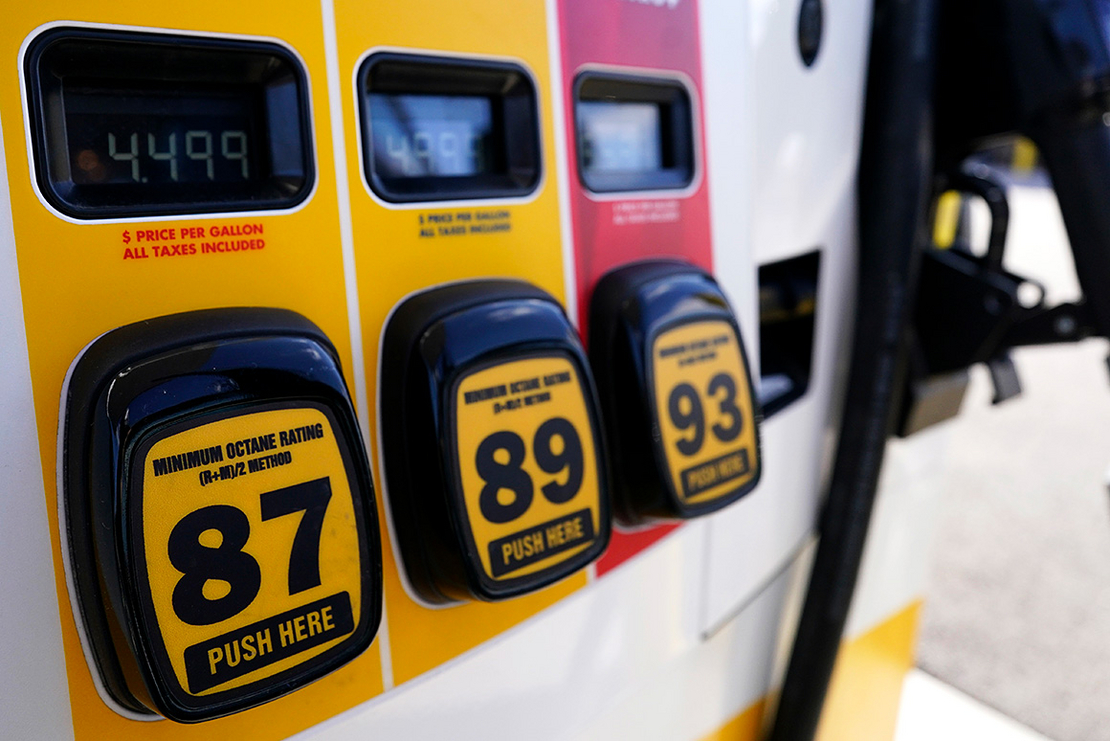 Gasoline and diesel prices hit new records yesterday, touching off a war of words between President Joe Biden and Senate Republicans on the direction of the economy.

The national average price for regular gasoline hit $4.37 a gallon, and diesel hit $5.50, according to AAA. Those are both all-time highs. Gasoline averaged $2.97 per gallon a year ago.

The roots of the price spike go back to the beginning of the pandemic and will be hard to fix, analysts said.

The oil industry shut down oil fields, laid off workers and closed refineries at the beginning of the pandemic, when the recession and lockdowns cut into fuel consumption. As people returned to work, there was less oil available to meet the demand, said Devin Gladden, a spokesperson for AAA.

Yet there’s little that the administration or Congress can do in the short term to lower gasoline and diesel prices, said Andy Lipow, president of Lipow Oil Associates LLC. Releasing crude from the national reserve has helped, and the number of drilling rigs in the United States continues to rise, which should bring more oil onto the market. But it could still take time for the oil industry to catch up with a fuel-thirsty world.

“Even if peace breaks out, it sounds like sanctions [on Russia] aren’t going to be lifted quickly,” Lipow said. “I think we’re in a higher energy cost environment for several years.”

Similarly, Gladden said “we were already dealing with a fire related to gas prices, and the war in Ukraine literally dumped gasoline onto the raging fire.”

As the pandemic has eased up, AAA and other market watchers are predicting a sharp increase in driving as people take long-delayed vacations.

Fuel prices are a main driver of inflation, which reached levels this year not seen since the early 1980s.

According to a research note from the Dallas Federal Reserve this week, U.S. shale drillers are unlikely to ramp up their production, because they’re under pressure to back their lenders and investors before they spend on new drilling, They’re also facing labor and materials shortages.

Even if production ramps up, it may not lead to quick declines in gasoline and diesel prices, the report said. Most retail filling stations are independently owned, and they often set their prices based on their estimate of future prices.

Gasoline prices have fallen more slowly than crude prices, the report notes. On the West Coast, a refinery shutdown in March may be partly to blame. In other instances, retailers were slow to raise their prices at the beginning of the gas crunch, and are “recapturing margins” to make up for it.

Biden acknowledged high gasoline prices yesterday during a White House speech about the economy. The president argued he’s tried to tackle high oil prices by releasing 180 millions of barrels of crude from the Strategic Petroleum Reserve over the next six months.

Biden also attacked Sen. Rick Scott of Florida, a Republican who has proposed an economic recovery plan that would include extending federal income taxes to low-earning people who are currently exempt.

“The fact is, the average cost of a barrel of oil has been steady for the last week — why has the cost of energy continued to go up?” he said. “Republicans have offered plenty of blame but not a single solution to actually bring down the energy prices.”

Scott, in response, blamed Biden for high oil prices and invited the president in a Twitter post to a debate in Florida, “if he can find it.”

“Likewise, the industry-critical tone of today’s speech—including Biden’s comment that ‘the average cost of a barrel of oil has been steady for weeks, […] so why do gas prices keep going up so high?’—could point to a new round of further criticism and scrutiny from the White House and Democrats on Capitol Hill,” Clearview said.

Prices are likely to rise over the next few months as European countries consider a ban on Russian oil imports, according to analysts

“The repercussions of the embargo would be comprehensive and wide-ranging, pushing oil prices higher in the short to medium term,” the data firm Rystad Energy said yesterday in an email. “As the sanctions are negotiated, crude prices will stay elevated as war-related uncertainty persists and summer demand kicks in over the coming weeks.”

Saudi Arabia and its allies in the OPEC could push prices down by increasing their output, but that hasn’t happened yet.

Domestic oil prices rose above $120 a barrel after the war started, but retreated to less than $100 yesterday. At the same time, many oil refiners are seeing a wider profit margin for each barrel of crude that they turn into gasoline or diesel (Energywire, May 5).

The new all-time high of $4.37 for regular gasoline did not surpass an earlier AAA record from July 2008, if adjusted for inflation. That $4.11 average would be more than $5 a gallon today.