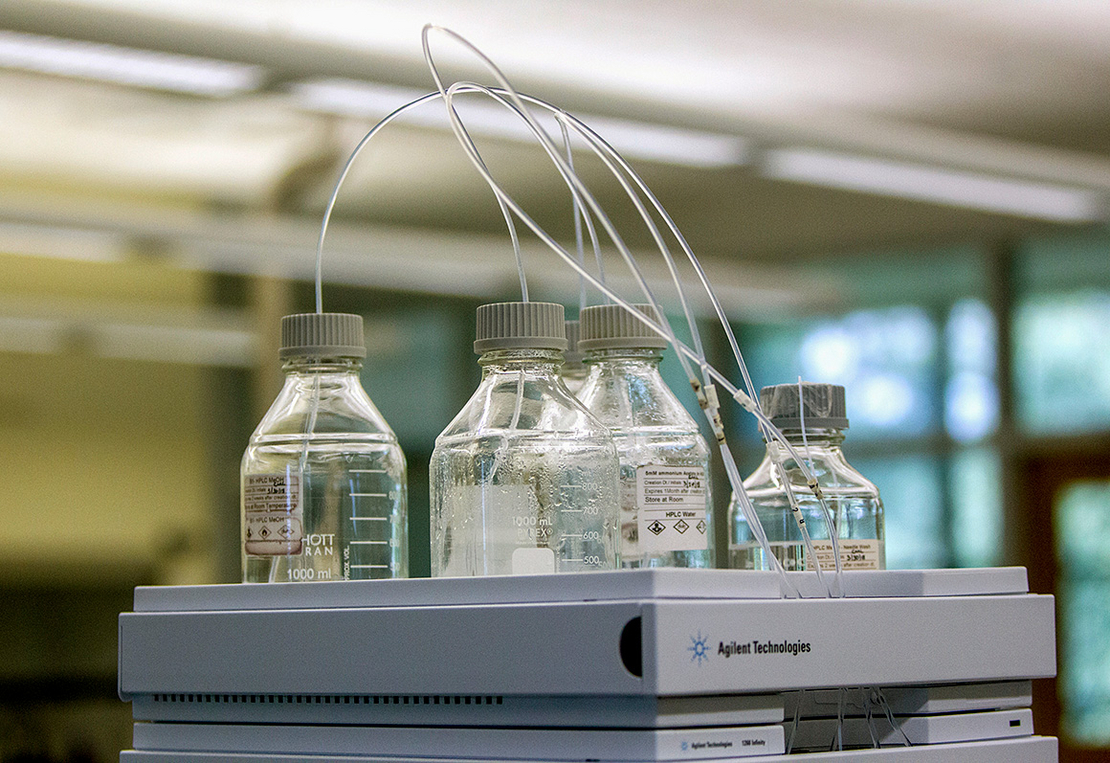 Equipment used to test for per- and polyfluoroalkyl substances in drinking water is seen at Trident Laboratories in Holland, Mich. Cory Morse/The Grand Rapids Press via AP, File

Hazardous levels of so-called forever chemicals permeate drinking water near military bases across multiple states, according to new test results, heightening concern among advocates that the contamination crisis has spiraled beyond the Department of Defense’s control.

Data released last week by the military and circulated yesterday by the Environmental Working Group show levels of PFAS exceeding federal health advice for two compounds, along with even greater amounts of other related chemicals of concern. At least two detections showed levels of the chemical PFOA, a likely carcinogen, at nearly three times the threshold currently advised by EPA in drinking water.

The extent of contamination by per- and polyfluoroalkyl substances across bases is “extremely high,” according to EWG policy analyst Jared Hayes, who said the pollution is a further indictment of how officials have handled the situation.

“For too long, service members and people living in communities near military installations have been the victims of the Pentagon’s failure to act,” Hayes said in a statement.

Military officials are required by law to test off-base drinking water for a number of PFAS and make the findings public. The data revealed levels of PFOA, PFOS, PFHxS, and PFHxA in Florida, Michigan, Pennsylvania and Washington near military bases.

Amounts ranged across areas, but all results showed levels of multiple PFAS, with most measurements in parts per trillion reaching the double or triple digits and occasionally exceeding that.

Among the most disconcerting findings were high amounts of PFOA and PFOS, two chemicals set to be regulated under both the Safe Drinking Water Act and the Superfund law. EPA currently has a health advisory in place of 70 parts per trillion in drinking water for those chemicals, with that amount expected to drop dramatically given current research, possibly to single digits (E&E News PM, Nov. 16, 2021). When those levels are breached, military bases are required to provide help, either in the form of water filters or other safe drinking access assistance.

The other three chemicals reflected in the data also cropped up at elevated levels. PFBS, a replacement chemical for PFOS that is under heavy scrutiny from regulators, appeared at levels as high as 276 ppt in the area near the Whidbey base. Levels of PFHxS meanwhile exceeded 1,000 ppt near Whidbey, Grayling Army Airfield, and Joint Base Lewis-McChord.

Defense Department spokesperson Peter Hughes said in a statement that the military is working to address contamination issues and has acted swiftly to assist affected communities.

Contamination on and near military bases has become one of the biggest PFAS-related hurdles currently facing regulators. Much of the pollution is due to the use of aqueous film-forming foam, which is commonly used in training and crisis scenarios. That AFFF is laden with the nonstick, heat-resistant chemicals, making it useful for the military. But its use has resulted in widespread contamination that has put the Pentagon on the hook for billions of dollars in cleanup costs.

Lawmakers have taken an increasingly terse tone with Defense Department officials in their push for answers as they question the military’s inaction on PFAS contamination even after health risks became known. Members of affected communities have repeatedly testified that the contamination has wreaked havoc throughout their neighborhoods, with many blaming health issues on the presence of the PFAS (E&E Daily, Dec. 10, 2021).

Last year, Congress allotted some $500 million for PFAS cleanup specifically linked to military bases. And the 2020 National Defense Authorization Act mandates that the Defense Department phase out its use of AFFF and find a replacement. Meanwhile, lawmakers have continued to apply pressure and query military officials on their cleanup timeline.

The new data circulated this week is only likely to add fuel to that fire. EWG emphasized the gravity of the findings as further evidence that the situation requires immediate action. Hayes indicated that legislation could be necessary in order to ensure that both military members and the public stay safe.

“If DoD officials continue to drag their feet, Congress must act to protect service members and military communities,” he said. “Thanks to new resources and deadlines, the department has run out of excuses for its failure to protect us from toxic PFAS.”