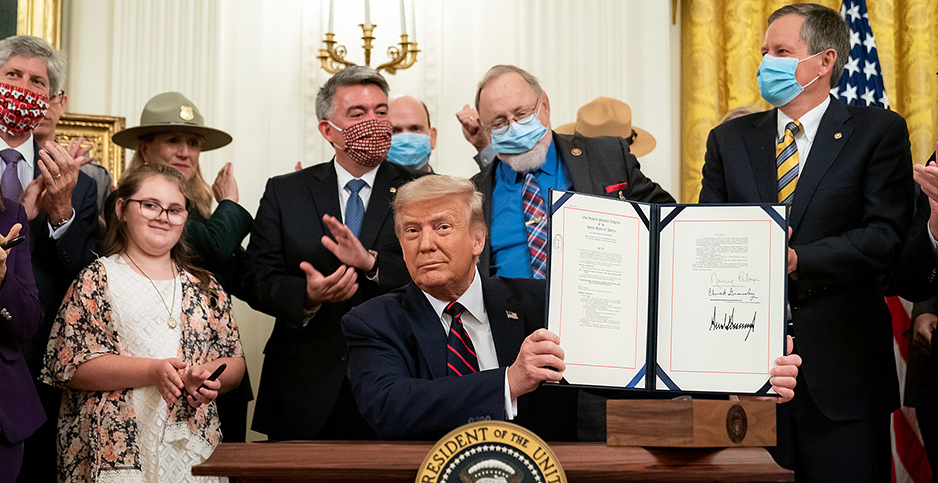 Earlier this month, President Trump signed a major environmental bill into law and basked in praise from allies that he’d cemented a conservation legacy akin to President Theodore Roosevelt’s.

Republicans boasted that it was their party — not the Democrats — that passed legislation guaranteeing millions of dollars would go toward protecting national parks and public lands.

"Only one president has got it done," Interior Secretary David Bernhardt told Trump at the Great American Outdoors Act signing ceremony, reflecting on the decades members of both parties have spent trying to achieve the so-called holy grail of conservation policy. "And that is you" (Greenwire, Aug. 4).

But it’s unclear if these talking points will surface at all during this week’s Republican National Convention, or whether they will clash with other GOP priorities. Many Republicans are cautioning against ignoring the issue in the days ahead.

Quill Robinson, vice president of government affairs at the American Conservation Coalition, said it would be a "strategic mistake" for the GOP not to take a victory lap at the party convention.

"It’s a huge win and only has an upside," said Robinson, whose group is geared toward energizing the younger generation of conservative voters. "It will help make the Republican Party stronger."

Though the Great American Outdoors Act was a bipartisan victory, Republicans have seized most aggressively on the feel-good message of boosting protections for parks when more Americans than ever are going outside for solace during the coronavirus pandemic. They have used the measure to combat optics giving the impression the party doesn’t care about the environment.

It’s an especially winning issue for voters in Western states, where outdoor recreation serves as both a critical economic driver and a way of life.

And while a presidential convention is about pitching the party’s standard-bearer, it serves as an opportunity to highlight the issues that could help down-ballot candidates, too — candidates like Sens. Cory Gardner of Colorado and Steve Daines of Montana, two of this year’s most vulnerable Republican incumbents who convinced their leadership to schedule the Great American Outdoors Act for a floor vote.

A recent poll conducted by the Center for Western Priorities showed that 81% of Western voters were evaluating presidential and congressional candidates by their positions on "national public lands, parks and wildlife issues."

"It’s a smart move for any candidate to reach out to the outdoor voting bloc, because they are clearly the key to reaching swing voters here in the West," said the group’s spokesman, Aaron Weiss.

It’s also perhaps the single environmental policy item Republicans have championed that can unite Americans across the ideological spectrum, including inside their own tent.

Days after enactment of the Great American Outdoors Act, the Trump reelection campaign launched a new coalition, "Sportsmen for Trump," which is intended to get the word out about the administration’s commitment to conservation along with Second Amendment rights.

The president’s son Donald Trump Jr. is himself an avid hunter and fisher who dedicated an entire episode of his weekly streaming show to the landmark public lands bill, featuring special guests Willie Robertson of "Duck Dynasty" and Michael Waddell of "Bone Collector" (Greenwire, Aug. 7).

"Awareness around public lands issues and engagement on this issue is at an all-time high in my 20-year career," said Land Tawney, executive director of Backcountry Hunters & Anglers. "There are more people who are paying attention to these issues. These have become top-tier election issues."

Trump Jr. is expected to speak at the convention, but a campaign spokesperson would provide no details about what his speech will be about.

If the Great American Outdoors Act does get top billing at any point during the Republican convention this week, it could lead to some awkwardness.

The landmark legislation that so many Republicans are so proud of is anathema to the plank of the party platform adopted for 2016 that derided federal land protection as a government power grab and called on Congress to "immediately" pass legislation giving certain land back to the states (E&E Daily, July 12, 2016).

"The residents of state and local communities know best how to protect the land where they work and live," the 4-year-old platform reads. "They practice boots-on-the-ground conservation in their states every day."

This language was controversial at the time of its adoption, as influential conservation advocacy groups protested its inclusion and Ryan Zinke — then a Republican congressman from Montana who would become Trump’s first Interior secretary — resigned as a convention delegate in opposition (Greenwire, July 19, 2016).

There might have been a discussion about revising the language this year were it not for the coronavirus pandemic, which forced both national party presidential nominating conventions to be held remotely.

While Democrats did produce a 2020 platform, Republicans are opting not to adopt a new platform until the presidential election of 2024, saying they did not want "a small contingent of delegates formulating a new platform without the breadth of perspectives within the ever-growing Republican movement."

On the eve of the GOP’s convention kickoff, the national party adopted a resolution codifying this decision, stating, among other things, that "all platforms are snapshots in the historical context in which they are born, and the parties abide by their policy priorities, rather than their political rhetoric."

Jess Turner, executive director of the Outdoor Recreation Roundtable, said she doesn’t believe Republicans would include this plank in their 2020 platform under normal circumstances.

"It seems dozens of members have moved on this issue since 2016 and clearly wouldn’t support this anymore or hold himself to that — and with Trump supporting GAOA, I’d assume he’d feel the same way, that the sell-off platform isn’t really the way forward," she told E&E News.

"I have seen Republicans use public lands more and really embrace it over the last four years, likely because the sell-off issue was so unpopular and unsuccessful," she added.

Tawney doesn’t want to give the party a pass.

"The president does his press conference [on the Great American Outdoors Act], the celebration signing ceremony, and then the way that’s juxtaposed with letting this platform go forward? Man, it’s mind-boggling, I would say."

He said Trump Jr., a Backcountry Hunters & Anglers life member, could speak up now against the platform, having shown his willingness in the past to speak out in favor of protecting public lands and other areas, most recently imploring his father’s administration to halt plans for the controversial Pebble mine project in Alaska (E&E News PM, Aug. 4).

‘Responsibility to speak up’

Gardner and Daines, who have staked their reelection campaigns on their conservation credentials, could also step up to the plate, Tawney said.

"They have states that rely on public lands, and not only as a way of life but as a huge part of their economies, and they have stepped up and gone to the president to make that point," he said. "They have a responsibility to speak up when it would benefit them, and not only that, they have the constituency that would applaud them for that."

Gardner’s office did not respond to multiple requests for comment, while Katie Schoettler, Daines’ spokesperson, said in a statement that the lawmaker "is adamantly opposed and has always been opposed to the sale of public lands [and] will always fight to ensure public lands and the Montana way of life are protected."

There is precedent for Gardner and Daines to act now, Tawney said, referring to Zinke’s decision to step down from the platform committee in protest over the public lands language.

But Zinke, too, ultimately showed the limits of his appetite for wading into this political battle.

Back on Capitol Hill in early January 2017, the House Republican majority took its cues from the platform and included a provision in its rules package to waive offset requirements for any legislation providing for the transfer of federal lands back to states (Greenwire, Jan. 5, 2017).

Zinke, at that time nominated but not yet confirmed to be Trump’s Interior secretary, voted "yes."