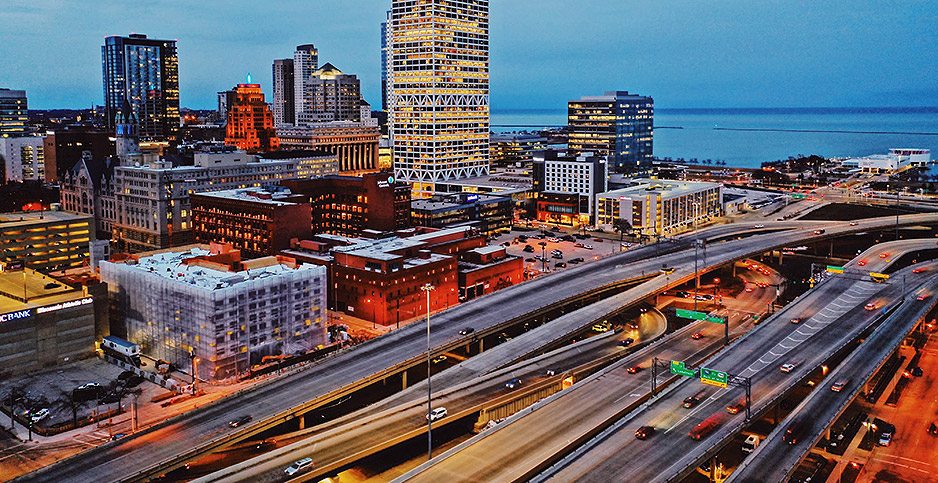 Some Wisconsinites are hoping the Biden administration will help stop a $1.1 billion project that would add to Interstate 94 west of Milwaukee. Matthew Schult/@mattschultz1/unsplash.com

This story was updated April 8.

Highways are emerging as a focal point for environmental justice activists across the country following the Department of Transportation’s intervention in a Texas project last month.

Groups in Oregon and Wisconsin are now pushing the Biden administration to take action on proposed highways in those states, as momentum grows after advocates successfully sought help over a proposed highway expansion in Houston.

No More Freeways, an organization in Portland, Ore., is aiming to halt a section of Interstate 5, while a coalition in Milwaukee wants federal help in fighting an I-94 expansion project. The first group sued the Oregon Department of Transportation on Monday in addition to sending a March 30 letter to DOT.

"As you’ve noted, too often freeways have divided urban communities, especially affecting people of color," No More Freeways members wrote to Transportation Secretary Pete Buttigieg. "Our organization has been inspired to hear your calls about the importance of ‘Building Back Better’ and using transportation investments and policies to right previous wrongs. This is one such opportunity."

The Wisconsin coalition is meanwhile scheduled to meet with federal highway officials this week, news first reported by CityLab and confirmed by E&E News.

Those newer requests come after DOT invoked the Civil Rights Act to pause construction of a Houston highway in early March. The North Houston Highway Improvement Project would expand the city’s I-45 and parts of other highways, with potentially deeply detrimental impacts.

An environmental assessment of the proposal by the Texas Department of Transportation (TxDOT) found that the effort would spark the removal of more than 1,000 homes and businesses, along with schools and religious establishments. That would impact low-income Black and Hispanic residents the hardest in the sprawling and diverse city, The Texas Observer reported.

Harris County, where Houston is located, sued TxDOT in March over the plan.

Advocates have also strongly pushed back on the project, with help from lawmakers including Rep. Sheila Jackson-Lee (D-Texas). She submitted a letter to DOT in December raising environmental justice concerns over the expansion. Two local groups, Air Alliance Houston and Texas Housers, sent similar letters in January.

On March 8, the Federal Highway Administration sent a letter to TxDOT citing the three requests and Title VI of the Civil Rights Act. Title VI promises that no individual may be subjected to discrimination under programs receiving federal funding.

"To allow FHWA time to evaluate the serious Title VI concerns raised in the letters referred to above, we request that TxDOT pause before initiating further contract solicitation efforts for the project," wrote Division Administrator Achille Alonzi in the March letter.

Adam Hammons, a TxDOT spokesperson, said the department does not comment on ongoing lawsuits or investigations, but said it is in talks with the Biden administration "seeking clarity around what a pause might mean as far as timing is concerned for future contract solicitation efforts."

Doug Hecox, a spokesperson for the Federal Highway Administration, confirmed that the department has heard from multiple cities regarding highway expansions and possible civil rights violations. "Though their concerns may not be identical, it is clear that transportation decisions of the past have affected Americans nationwide," said Hecox via email. "Too often roads and our transportation networks have separated communities instead of connecting them."

Hecox added that the Biden administration will continue to pay close attention to the issue.

Proponents of the highway proposals argue they are important for congestion reduction, as well as improved commute times. Tia Williams, a spokesperson with the Oregon Department of Transportation’s Urban Mobility Office, shared a statement emphasizing that the department supports "restorative justice goals" but stands behind its efforts.

"This project underwent a robust environmental assessment that showed future air quality would improve in part due to the congestion relief provided by this project. Those findings were reviewed and confirmed by a panel of national air quality and transportation experts," the department said.

Oregon also sent a statement from Alando Simpson, a member of the executive committee steering board and local resident, who argued the expansion "provides the opportunity to improve future air quality for the community."

Wisconsin Department of Transportation spokesperson Michael Pyritz meanwhile said the department is "currently performing a reevaluation of the project" involving an "extensive outreach effort." Pyritz noted the proposal has an approved environmental impact statement and said the department will work with the federal government on next steps.

Opposing groups in Oregon, Wisconsin and Texas have been quick to note the history of highways, which have long been used to divide vulnerable communities from their more privileged counterparts.

"It feels like the conversation is finally getting the attention it deserves," said Harrison Humphreys, a transportation policy advocate with the Houston Air Alliance.

For local groups, this moment is one long in the making.

They have noted that, in addition to displacing communities of color, highways are also major sources of greenhouse gas emissions. That makes proposed expansions seemingly at odds with the climate goals laid out by the Biden administration, among other stated priorities.

Humphreys, who has been working on issues around Houston’s highway expansion for years, said the administration’s openness to discussing environmental justice and taking action to pause that project has been heartening.

Houston residents have reported that TxDOT is moving forward with property sales and other actions that appear to undermine the Biden administration’s pause. In a March 31 letter shared with E&E News, Houston Air Alliance asked DOT to clarify its action and ensure TxDOT is complying.

Organizers in other cities are nonetheless heartened by Houston’s example. "I think ‘cautiously optimistic’ is an accurate way to describe this," said Cassie Steiner, a senior campaign coordinator with the Wisconsin chapter of the Sierra Club.

Steiner noted the I-94 East-West highway proposal in the state has been stopped before due to environmental justice worries in past years, leaving opponents concerned that any progress on the issue could again be nullified.

Still, Steiner said growing awareness of "the disproportionate impact to Black and Latinx communities" stemming from that proposal is gaining traction in the state. The Biden administration’s rhetoric around environmental justice adds fuel to that momentum, she said, and a member of the Milwaukee coalition has been in touch with Houston over their similar campaigns.

"This is a national problem, everywhere," said Humphreys. "If other areas are looking for any kind of help or resources, we’d be happy to give them our playbook on how we got to this point. We want to work with everyone who wants to get this done."