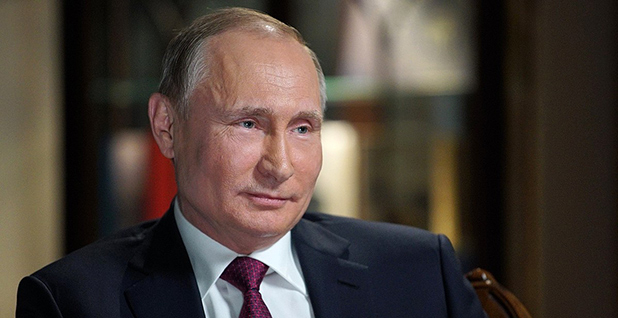 Russian President Vladimir Putin. U.S. lawmakers are increasingly concerned about a natural gas pipeline between Russia and Germany. The Kremlin/Wikipedia

Bipartisan support is mounting on both sides of the Capitol against a controversial pipeline that would transport Russian natural gas to Germany.

Led by House Agriculture Chairman Mike Conaway (R-Texas), 16 members from both parties last week signed on to a nonbinding resolution, H. Res. 1035, opposing completion of the Nord Stream 2 pipeline, which would carry Russian gas across the Baltic Sea to Germany.

The measure concludes that the project is a "drastic step backwards for European energy security and United States interests," while calling for European nations to oppose the pipeline.

The resolution additionally urges President Trump to use "all available means" to support European energy security "through a policy of diversification" to lessen reliance on Russia, which provides the bulk of Europe’s natural gas.

Finally, the measure supports imposing sanctions on Nord Stream 2 under a 2017 law that authorized such penalties against Russia, Iran and North Korea interests.

Also signing on to the measure were Natural Resources Chairman Rob Bishop (R-Utah), Rep. Kevin Cramer (R-N.D.), who is seeking the Senate seat held by Heidi Heitkamp (D-N.D.), and Rep. Marcy Kaptur (D-Ohio), the ranking member on the Appropriations subcommittee that funds the Energy Department.

Trump’s trip to Europe earlier this month has refocused attention on Nord Stream 2, after the president said the project was not in Germany’s "best interest."

While Secretary of State Mike Pompeo told the Senate Foreign Relations Committee last week that he opposes the project, the administration has not yet issued sanctions against it.

Barrasso said yesterday "it’s hard to tell," at this point whether mandating sanctions against Nord Stream 2 could garner 60 votes in the Senate.

"I think there’s a lot of support for what we’re trying to do and a lot of agreement that the more Germany is dependent on Russia for energy, the worse it is for them, the more difficult it is for NATO," he told E&E News.

In a Washington Post opinion piece published last week, Barrasso called for Congress to slap sanctions on the pipeline to curb Putin’s leverage over Europe.

"When Putin looks at natural gas, he thinks of politics, he thinks of money and he thinks of power," Barrasso wrote. "It is in America’s national security interests to help our allies reduce their dependence on Russian energy. We need to make clear how important it is for their own security, as well."

Trump echoed that theme yesterday during a press conference with Italian Prime Minister Giuseppe Conte, during which he said the U.S. is in talks with the European Union "about building anywhere from nine to 11 ports" to accommodate U.S. LNG shipments.

Trump also signaled support for the $22.5 billion TAPI pipeline under construction in Turkmenistan, Afghanistan, Pakistan and India. "I’d like to see a competing pipeline," he said.