Hill braces for ‘twists and turns’ as two-pronged push unfolds 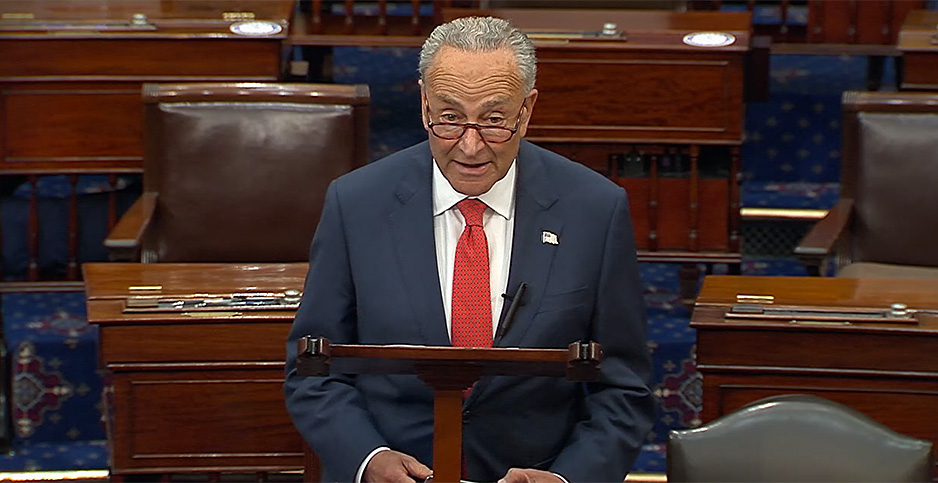 Both ends of Pennsylvania Avenue are bracing for a bumpy ride as congressional Democrats put in motion the two-track process that they hope will deliver on President Biden’s ambitious infrastructure agenda.

Addressing the Senate after the July 4 recess, Majority Leader Chuck Schumer reiterated plans to bring the $973 billion bipartisan infrastructure framework to the floor in the coming weeks. That framework was agreed to in principle by the White House and 21 senators from both parties last month.

Senate committees are “getting closer” to turning the agreement into legislation, the New York Democrat said yesterday. “We are making very good progress towards that goal.”

Additionally, the Senate Budget Committee is “close” to finalizing a fiscal 2022 budget resolution that will allow the Senate to “move forward” with the rest of Biden’s American Jobs and Families Plan, the combined cost of which is north of $4 trillion.

Passing a budget resolution is the first step in assembling a filibuster-proof package that is expected to contain much of Biden’s proposals that were not included in the bipartisan deal.

But internal divisions among Democrats and the pace of actually translating the bipartisan deal into legislative text remain major hurdles that must be sorted out as the August recess approaches.

“My guess would be a lot of twists and turns before we get done,” Senate Environment and Public Works Chair Tom Carper (D-Del.) told E&E News yesterday.

Carper said his goal is to ensure that the committee’s bills that have passed are actually funded. “It’s not enough just to authorize,” he said.

However, Sen. Rob Portman (R-Ohio) — a member of the bipartisan group — told reporters yesterday that actual text of the bill may not emerge until next week.

Furthermore, Senate Democrats are still trying to find agreement on a top-level spending number for the budget resolution.

Budget Chair Bernie Sanders (I-Vt.) is said to favor a budget that would allow as much as $6 trillion in reconciliation spending, while more moderate Democrats have proposed spending at about $3.5 trillion.

Following a meeting with Biden at the White House, Sanders yesterday downplayed the internal tensions.

“You got 50 members of the Democratic caucus and, no great secret, some are progressive, some are more conservative,” Sanders told reporters at the Capitol. “But I’m confident we’re going to reach a happy medium and end up with a bill the American people can be very proud of.”

Sanders said the resolution under development will be “the most consequential piece of legislation for working people since the 1930s,” including “dealing with the literal, existential threat that we face in terms of climate.”

“This is a big deal,” he said. “And I think at the end of the day, we’re going to have 50 votes — 50 Democratic votes of folks who want to go forward in a very substantial way.”

“Our policymaking muscles have atrophied over the last few years,” Psaki told reporters. “This is exactly what it looks like. It’s messy at times, and we fully expect that these negotiations will have ups and downs. We’re prepared for that.”

Yet another question mark in the infrastructure sausage-making is the bid by Senate Energy and Natural Resources Chair Joe Manchin (D-W.Va.) to insert his own energy priorities into the bipartisan framework.

Green groups have started to rally against the $73 billion in energy provisions that Manchin put forward just before the recess.

The committee is set to mark up that draft bill tomorrow, but a new analysis from Friends of the Earth accuses the legislation of favoring fossil fuel interests over actually implementing policies to reduce greenhouse gas emissions.

According to the report, released this morning, Manchin’s bill favors nuclear, carbon capture and hydrogen production authorizations at $28.8 billion compared to $420 million in direct authorizations for wind, solar, geothermal and tidal, the group said.

“That’s a ratio of dirty to renewables of over 70-to-1,” the report said. “Even when combining the renewable provisions with the bill’s meager storage and efficiency programs, Manchin still proposes spending more than twice as much on dirty than he does on clean.”

For his part, Manchin has defended the initial draft as an all-of-the-above strategy for energy innovation to reduce carbon emissions (E&E Daily, June 25).

Indeed, many of the provisions coming under criticism from green groups were taken directly from the White House’s American Jobs Plan, which calls for more than a dozen hydrogen demonstration projects in addition to carbon capture demonstration spending.

Friends of the Earth, however, pointed to recently released taped admissions from an Exxon Mobil Corp. lobbyist, who cited Manchin as one of the industry’s top Democratic supporters, as evidence to his alleged compromised position in authoring the bill (E&E Daily, July 1).

Manchin’s bill has numerous climate-inspired provisions, though they are far less than what advocates are seeking.

“This bill has Exxon’s fingerprints all over it,” the group said.

More than 130 mayors today will lay out infrastructure priorities in a letter to congressional leaders that urges large investments in multiple areas to tackle climate change, while providing flexibility for cities to utilize funds.

“The climate and equity crises we face are interrelated and have been compounded by COVID-19, and therefore must be addressed through collaborative, holistic thinking and bold, innovative ideas,” dozens of city officials wrote in the letter, which includes a lengthy appendix of recommended investments in transportation, climate resilience, buildings and housing, land use and work force.

Specifically, SEIA wants the five-year ITC extension included in the “Growing Renewable Energy and Efficiency Now (GREEN) Act,” H.R. 848, to be “lengthened and strengthened to fill as much of the 10-year budget window as possible and increase the credit back to at least 30 percent.”

To address financing shortfalls related to the COVID-19 pandemic, SEIA wants Ways and Means to include a 100% direct pay option “for as long as possible.”

The group additionally issued a warning about new domestic content requirements that are under consideration by Ways and Means.

“While we fully support a broad approach to incentivizing domestic manufacturing investments, we urge the committee to avoid policies which are overly restrictive and unnecessarily harm solar deployment,” wrote SEIA President and CEO Abigail Ross Hopper.

Neal has not yet indicated his plans for a markup of the “GREEN Act,” but a competing proposal, S. 1298, by Senate Finance Chair Ron Wyden (D-Ore.) advanced through that panel in May.

Wyden’s bill aims to streamline the energy tax code by jettisoning long-standing tax breaks for fossil fuels and implementing three categories of technology-neutral incentives for electricity, transportation and efficiency. He told reporters yesterday that his bill “is the linchpin of a climate strategy.”

His bill would continue the ITC until EPA and the Energy Department certifies that emission levels are at 75% below 2021 levels, triggering a five-year phaseout with the credit’s value decreasing annually until it hits zero, according to a summary.