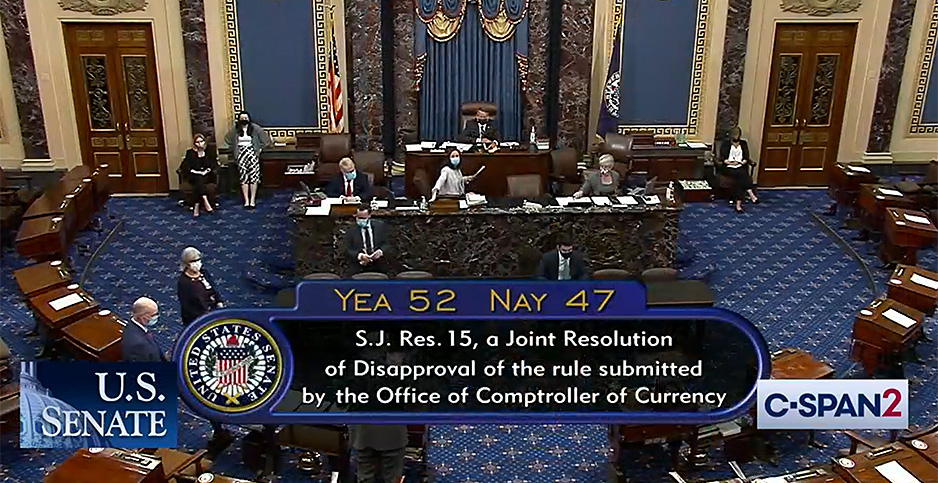 The Senate voted yesterday to undo a Trump-era Office of the Comptroller of the Currency rule. C-SPAN

Lawmakers may have a little more time to kill a handful of environmental rule rollbacks issued during the end of the Trump administration.

It has to do with technicalities surrounding the Congressional Review Act, which allows Congress and the White House to repeal regulations finalized in the last 60 congressional days, or about six months. The clock is ticking — but for exactly how long remains unknown.

"It looks like the Senate has more time to take up CRA resolutions before the window closes than previously thought," said Amit Narang, an analyst at left-leaning Public Citizen. "Which means there could be a greater chance that the Senate passes more CRA resolutions with the extra time."

The CRA allows lawmakers to "disapprove" of an enacted regulation by simple majority votes, effectively killing a rule much faster than through the rulemaking process.

Just yesterday, the Senate voted 52-47 against a rule from the Office of the Comptroller of the Currency related to interest rates.

Democrats had until early April to introduce CRA resolutions; they introduced six. Two of them focused on the environment.

Waiting in the wings is a CRA resolution against a Securities and Exchange Commission rule making it harder for investors to push companies on climate and other matters.

Most regulatory scholars and Hill staffers have generally been operating under the assumption that the Senate must vote on all CRA resolutions by May 21 to enjoy the law’s fast-track powers and avoid a filibuster.

But by Narang’s number crunching, the deadline could be as late as May 27, assuming the Senate does not meet this Friday or next.

Curtis Copeland, a retired Congressional Research Service analyst, agreed the deadline would be May 27 should the Senate keep to the same scheduling.

That might not seem like a big difference, but a few more days could make or break a resolution given how valuable Senate floor time is. Each CRA resolution can consume up to 10 hours of debate.

If and when the resolution passes the Senate, the House will consider it. Under the law, the House does not have a deadline to pass its resolution.

Still, advocates expressed concerns the House might drag its feet, which would affect EPA’s ability to draft new, stronger standards on methane.

Dan Grossman, a director at the Environmental Defense Fund, noted that President Biden’s climate executive order gave the agency a September deadline to introduce a plan on methane.

"EPA has to get down to the business of writing the rule," Grossman said, adding it would "really be a sprint" if the House doesn’t take up the resolution until June or July.

Grossman’s fear might come true. Ryan Brown, a spokesperson for Rep. Diana DeGette (D-Colo.), who is sponsoring the House resolution to undo the Trump methane action, said the Energy and Commerce Committee is expected to consider her legislation soon and will "begin its work to establish the legislative record needed to fend off any future legal challenges."

"Once that’s complete, and DeGette’s bill is approved by the committee, the issue will be brought to the full House for a vote," Brown said.

Recent official calendar records show a range of top White House and EPA officials are engaged on the issue. EPA air chief Joe Goffman met with Gina McCarthy, the president’s domestic climate adviser, and other officials in March to discuss the methane resolution. In late April, Biden indicated he would sign it.

Despite his worries, Grossman expressed optimism the resolution might get Republican buy-in in the House. Three GOP senators supported the measure last month.

"We’re hearing good things from offices — we are hearing positive things," he said, even if "nobody is so far coming out and saying, ‘I’ll support.’"