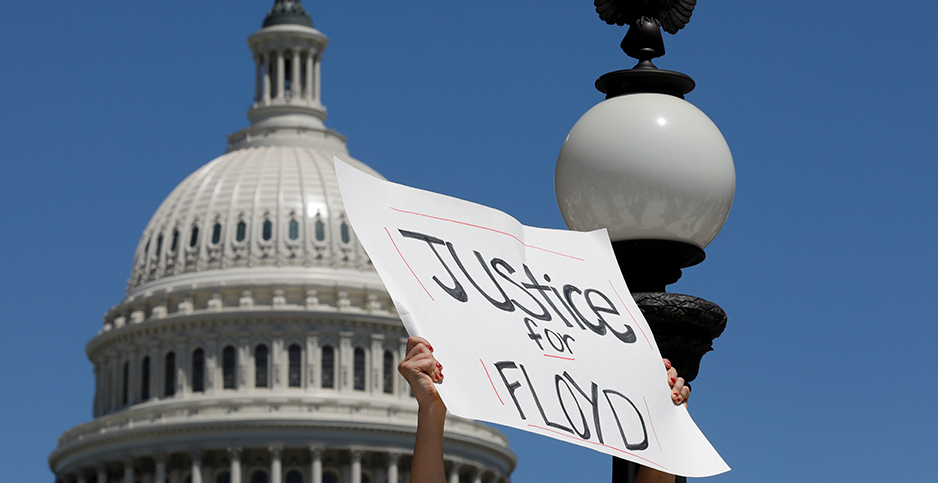 Demonstrators near the Capitol over the weekend, following the death of George Floyd at the hands of police in Minnesota last week. Yuri Gripas/Reuters/Newscom

As Congress weighs responding to the ongoing civil unrest after a series of police-involved deaths of African Americans, lawmakers insist they are forging ahead on energy- and environment-related legislation, including a public lands conservation bill and a massive infrastructure package.

Democrats are insisting on bills to address racial inequality, policing and environmental justice issues, but both chambers also have a packed pre-election agenda.

House Majority Leader Steny Hoyer (D-Md.), meanwhile, said the chamber’s committees would be writing several bills over the next few weeks that will be acted on in late June and July.

He said those would include a long-delayed infrastructure bill, its version of NDAA and the fiscal 2021 spending measures.

The legislation moving in the next few months will likely be Congress’ last significant lawmaking before heading to party conventions in August and the fall campaigns get underway.

For environmental and energy interests, the upcoming bills may represent their clearest shot at getting policy provisions into legislation this Congress as well as a chance for political messaging ahead of the elections.

‘A good amount of time’

McConnell called the lands bill a "major piece of legislation" that would for the first time fully fund the Land and Water Conservation Fund at $900 million annually.

He said Republican Sens. Cory Gardner of Colorado and Steve Daines of Montana, both of whom face very competitive reelections this fall, would be leading the effort (E&E Daily, June 2).

Senate Majority Whip John Thune (R-S.D.) seemed to suggest the Senate GOP might permit amendments to the legislation, saying it would likely "take a good amount of time on the floor." He did not specifically say what, if any, amendments could be debated.

A GOP aide familiar with discussions told E&E News that it’s not yet clear whether it will be possible to avoid amendments.

There’s some concern that allowing a freewheeling debate could risk having the bill ultimately tied up indefinitely. A long list of proposed amendments helped doom a Senate energy package earlier this year.

Sen. Joe Manchin (D-W.Va.), ranking member on the Senate Energy and Natural Resources Committee and a lead lands bill sponsor, expressed hope that colleagues on both sides of the aisle would not insist on amendments that could complicate passage.

Manchin, speaking at a ConservAmerica online event, said many members are interested in carve-outs for particular projects in their states, and "we’re not opposing any of that. We’re just opposing that on this piece of legislation."

With one noncontroversial amendment, Manchin explained, "you open up that Pandora’s Box" where so-called poison pills could slow down debate or derail the entire measure.

Moreover, many conservative lawmakers are already positioning themselves against the bill, unconvinced that there should be set annual funding for the Land and Water Conservation Fund outside the discretion of congressional appropriators.

The are 59 co-sponsors currently, and Manchin said he and other champions of the measure have the goal of getting 65 members to support the "Great American Outdoors Act." Sixty votes would be needed to ensure the bill can avoid a filibuster.

Hoyer said the House is not expected to have floor votes until the end of June, but he said the chamber could come back early if it can reach an agreement on coronavirus pandemic aid with the Senate.

The parties have been split over the scope of another relief package, with Democrats backing the $3 trillion "Health and Economic Recovery Omnibus Emergency Solutions (HEROES) Act," which they passed last month, and Republicans championing a narrower response with liability protections for businesses as they reopen.

Hoyer said that in the meantime, committees are working on an infrastructure bill, NDAA, a renewal of the Water Resources Development Act and the 12 annual spending bills.

"I believe that we will pass all of those by the end of July. But right now, our committees are working very hard to get that legislation prepared for consideration on the floor," said Hoyer.

House Democrats had previously hoped to have all 12 spending bills passed before July 4. The delay now adds to the likelihood of stopgap spending legislation being needed to avert a government shutdown when the new fiscal year begins Oct. 1.

Hoyer said the infrastructure bill would include "many of the things that the [House Select Committee on the Climate Crisis] is going to be making" recommendations on.

The panel had been expected to offer legislative proposals this spring for a broader climate bill, but that effort was delayed due to the pandemic (see related story).

Hoyer’s comment hinted that instead of a broad House climate bill this year, any proposals for curbing emissions will be rolled into the infrastructure plan.

Democrats have said repeatedly that the bill will focus on green-friendly initiatives, such as electric vehicle charging stations, overhauling water systems and promoting clean energy projects.

While both parties have condemned police violence and supported peaceful protects in the wake of the death of George Floyd, there were signs yesterday that any congressional response could become mired in election-year politics.

"There is no question that there is residual racism in America, no question about that. It’s not a dispute," said McConnell, who added that police accountability is "something Congress should take a look at" but didn’t promise any specific action.

Schumer told reporters at a press conference in the Capitol that Democrats — led by Sens. Cory Booker of New Jersey, Kamala Harris of California and Tammy Duckworth of Illinois — would be working to move "fairly quickly" on a legislative package and want McConnell to bring "something to the Senate floor on criminal justice" by the month’s end.

To Republicans, Schumer said, "Stop being afraid of what Trump might tweet about you and support the resolution."

Democrats yesterday attempted — predictably without success — to force a vote on a resolution condemning President Trump’s treatment of peaceful demonstrators outside the White House this week.

Republicans, in turn, sought a vote on a resolution condemning Floyd’s death and the ensuing riots, which Democrats also blocked for making no mention of the president’s actions. McConnell and Schumer could continue making these procedural maneuvers throughout the month.

Booker, during a press conference, mentioned environmental justice, saying race often decides "between what kind of environment, air you will breathe."

The House Energy and Commerce Subcommittee on Environment and Climate Change announced yesterday a hearing for next week on environmental justice and COVID-19.

Hoyer said House Democratic leaders are coordinating with the Congressional Black Caucus on any legislation that might be offered, including measures on police accountability and transparency.

He also did not rule out the House taking up a resolution censuring Trump for using federal police and the National Guard to clear demonstrators from near the White House this week.

"It was a terrible act. It was an act indicating the total lack of understanding and empathy with the anger and frustration and cry for justice that was being put out, simply to facilitate a photo op, obviously designed for political purposes, not designed to bring the country together," Hoyer added.