Hill Republicans to Pruitt: ‘This needs to stop’ 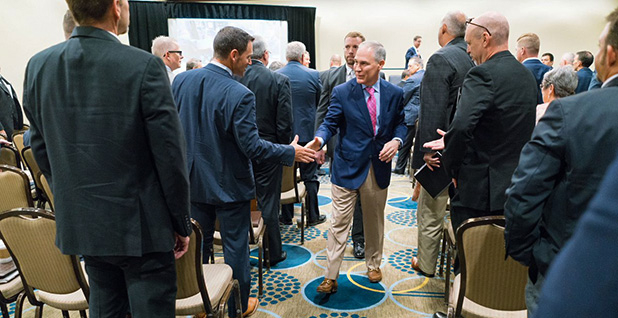 After repeatedly declining to comment on Pruitt’s ethic troubles in recent weeks, House Energy and Commerce Chairman Greg Walden (R-Ore.) was blunt about his frustration yesterday.

"The constant drip needs to stop so the agency can get its focus and footing back," he told reporters. "They are doing some really good work on the environmental front, but this needs to stop."

Sen. John Kennedy (R-La.), who has previously criticized Pruitt over ethics, didn’t mince words yesterday when asked about his support for the embattled EPA chief.

"I support his policies, but he’s acting like a moron," he told reporters, adding that he’s "astounded at some of this stuff I read" about Pruitt.

Echoing other Republican lawmakers, Kennedy said Pruitt’s continued service in the administration is a decision "that’s up to the president."

"I think he’s hurting his boss, and when he hurts his boss, he’s hurting the American people," Kennedy said. "But that’s between the president and Mr. Pruitt. But I’m not going to come down here just because he happens to be a nominee of a president I support or a nominee from my party and try to defend the indefensible. … Impropriety matters, the appearance of impropriety matters, and I thought that Mr. Pruitt would have learned his lesson."

Still, Pruitt’s standing on Capitol Hill continues to dwindle. Days after Sen. Joni Ernst (R-Iowa) called him "as swampy as you get," her fellow Iowa Republican, Chuck Grassley, hinted yesterday he was close to calling for Pruitt’s ouster over his implementation of the federal renewable fuel standard until Trump rejected controversial reforms to the program (E&E News PM, June 6).

"If this had gone through, I would probably answer your question," Grassley said with a laugh yesterday when asked by E&E News whether he thought Pruitt should go. "But I’m not going to answer it now."

GOP senators privately speak of Pruitt in terms "sort of like what Joni Ernst said publicly about the swamp," said Sen. Tom Carper of Delaware, the top Democrat on the Environment and Public Works Committee.

Asked about this week’s scandals, Carper responded, "I keep coming back to ‘you just can’t make this stuff up,’" before cracking his own joke at Pruitt’s expense.

"My wife’s birthday is coming up on June 17," Carper told reporters. "She’s been saying we need a mattress for some time, and I’m going to say to her, ‘Honey, well have I got a deal for you. Maybe we can save a few bucks and get a great mattress.’"

Meanwhile, the support from Pruitt’s backers is growing increasingly tepid.

Sen. Jim Inhofe (R-Okla.) blamed the media for much of Pruitt’s woes. "I would say it’s primarily the press that has hated him from the very beginning," he told reporters.

However, Inhofe too conceded that he is bothered by the onslaught of allegations. "The accusations are all troubling," he said.

Rep. Tom Cole (R-Okla.), who has known Pruitt for decades, continued to defend him yesterday as an "honorable and ethical person."

But he acknowledged the importance of exercising care when in the public spotlight.

"You do something, it can be easily misconstrued and will be exploited by your opponents," he said. "I look at his performance as EPA director, and I couldn’t be more pleased. I don’t think he has ethically done anything wrong, but I think he has exposed himself in ways that are politically unwise."

Cole also conceded that the difficulties in confirming a new administrator are helping Pruitt stay in his current job, although he blamed Senate Democrats for the confirmation hurdles.

As for the latest flap, Bishop quipped, "I like Chick-fil-A, I would have gone to it."

Meanwhile, Sen. Shelley Moore Capito (R-W.Va.), a senior member of the EPW Committee, had this assessment: "I think he has done a lot of really good things, and that’s why he’s in the job." She added, "As we have seen, sometimes people get tripped on other things besides the core mission."

She too conceded, however, that the constant stream of stories is eroding Pruitt’s standing.

"Maybe support has been very good and it’s gone to tepid," Capito said.

Sen. Brian Schatz (D-Hawaii) noted one positive aspect of Pruitt’s tenure: The scandals have focused attention on the policies the former Oklahoma attorney general has implemented at the agency.

"It seems like they want the corruption to boot … to poke everyone in the eye," he said. "The challenge that they’re facing now is that it was difficult for the environmental community to illustrate to the general public how corrupt EPA policy has become. But now we have it in three dimensions every six hours, a new example of it. So Scott Pruitt is the gift that keeps on giving."