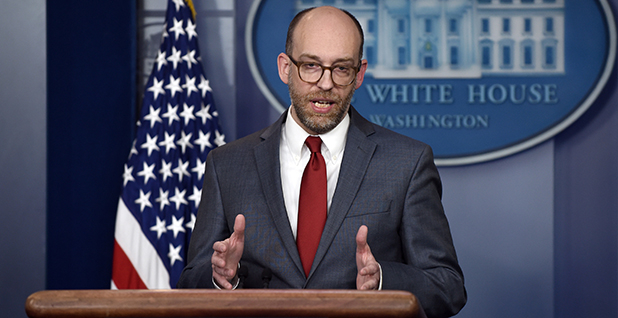 Sharp environmental and energy funding reductions proposed in the White House’s fiscal 2020 budget request yesterday aren’t likely to fly on a divided Capitol Hill, lawmakers from both sides of the aisle say.

Lawmakers are at best noncommittal and, in many cases, resistant to President Trump’s plan that would cut domestic spending by 5 percent below current spending for fiscal 2020.

"My hope is we’ll treat this [budget] the same way we treated the last one — not well," said Sen. Tom Carper (D-Del.), the ranking member on the Environment and Public Works Committee.

Trump tried in his first two budgets to slash EPA spending by about a third, but Congress responded with largely level funding — even with the GOP controlling both chambers. With Democrats now overseeing the House, the regulator isn’t likely to be cut and may even see an increase.

Like many Democrats, Rep. Betty McCollum (D-Minn.), the chairwoman of the House Interior-EPA Appropriations Subcommittee, immediately declared the EPA budget "dead on arrival." She criticized Trump for a "lack of interest" in addressing climate change, which received scant funding under the EPA request.

"While this is disappointing, it is not surprising, seeing as the president campaigned on prioritizing the fossil fuel industry and then filled his Cabinet with former coal and oil industry lobbyists," she added.

While climate is one area where Democrats will try for increases, there is bipartisan support for reversing a proposed $270 million — 90 percent — cut to EPA’s Great Lakes Restoration Initiative.

"The budget request does not treat our Great Lakes as the natural treasure they are," he said, suggesting he would again back $300 million in annual funding for it.

Bipartisan pushback is also certain on a Trump effort to eliminate funding for the Land and Water Conservation Fund, one of the nation’s more popular programs that was recently reauthorized by Congress (see related story).

Republicans, meanwhile, stressed that the budget is largely symbolic, suggesting they will ignore cuts to popular energy and environmental programs, just as they have in previous years.

"In all the years that I’ve been here, there’s never been a president’s budget that has passed as submitted, and I don’t think this will be any different," said Sen. Susan Collins (R-Maine), who sits on the Energy and Water Development Appropriations Subcommittee.

Sen. Lamar Alexander (R-Tenn.), who chairs that subcommittee, is a vocal supporter of ARPA-E and one of a handful of Republicans who has floated the program as a way to address climate change in recent weeks.

Sen. Dianne Feinstein (D-Calif.), the ranking member of that subcommittee, and Rep. Marcy Kaptur (D-Ohio), Alexander’s House counterpart, both predicted yesterday there would eventually be a push to fatten ARPA-E’s budget even more amid near-constant talk about climate change on Capitol Hill in recent months.

The program has received record funding the last two fiscal years despite Trump’s repeated proposals to slash it.

Schatz argued the repeated funding cut proposals belie rhetoric from congressional Republicans and the administration about energy "innovation," which he called "an excuse to do nothing."

Still, Rep. Garret Graves (R-La.), ranking member of the Select Committee on the Climate Crisis and one of those Republicans who has talked up innovation, suggested he’s taking Trump’s budget with a grain of salt.

"That’s the president’s perspective, which is always very informative, but it doesn’t dictate what Congress does," Graves said when asked about the proposed cuts to DOE research offices.

Graves said he, too, is interested in working on those DOE programs to examine how efficiently they use taxpayer money, whether or not that means funding cuts. He added he’s looking to meet with DOE officials about their research efforts in coming weeks as part of his work for the select committee.

But for now, he said, the budget request is just that — a request.

"Are we spending those dollars in ways that are actually providing actionable technologies, taking technology and being able to actually commercialize it?" Graves asked.

Other areas of the DOE budget request drew criticism, as well.

On the administration’s request to jump-start the Yucca Mountain licensing process, Nevada lawmakers were not pleased.

"The president is ignoring the voices of Nevadans by trying to restart Yucca Mountain — a project that wasted $19 billion already. I’m pushing for a consent-based approach that addresses America’s nuclear waste and will fight against any effort to revive Yucca," tweeted Sen. Catherine Cortez Masto (D-Nev.).

Rep. Rosa DeLauro (D-Conn.), a senior appropriator, is expected to lead a fight to reverse the $3.7 billion proposed cut from the Low Income Home Energy Assistance Program, an effort popular with cold-weather state lawmakers from both parties.

"It would be a cold day in hell before I helped pass a budget like this," DeLauro said.

Lawmakers have been suggesting for weeks that the budget will only be the start of lengthy negotiations regarding overall discretionary spending levels that may stretch until the fiscal year begins Oct. 1.

"This is a budget we will not take seriously," said House Budget Chairman John Yarmuth (D-Ky.), who noted his panel is expected to mark up the House budget resolution the first week of April.

Yarmuth said House Democrats would reject the administration’s proposal to cut domestic spending by 5 percent and then boost defense accounts by the same amount. He said Democrats want a budget deal that would have "parity" between the two accounts.

In the spending accord struck two years ago when the GOP controlled both chambers, Yarmuth noted, Democrats were able to negotiate equal increases. He said Democrats should expect to at least hit that mark again this year with control of the House.

Senate Appropriations Chairman Richard Shelby (R-Ala.) said yesterday it’s too soon to say if domestic spending will be increased, but he added that it may be hard to only provide a defense hike.

Shelby also hinted at the changing dynamic on Capital Hill with Democrats now running the House.

"It’s going to be a challenge this year [reaching a spending deal] — will see how things progress. I think you have to acknowledge reality," he added.