Hill vows vigilance with research in the crosshairs 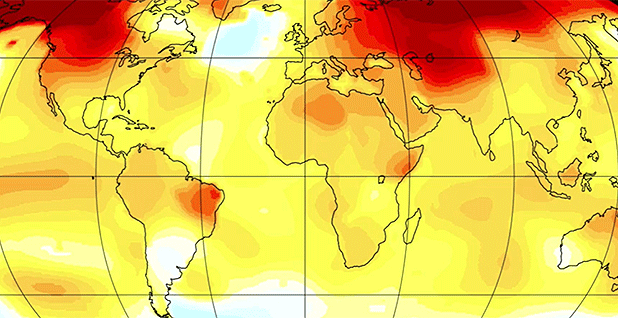 Democrats and some Republicans worry about the fate of climate science research. Map by NASA/Goddard Space Flight Center, courtesy of Flickr.

The Trump administration’s aggressive anti-climate stance is creating huge waves — with Democrats on guard and unsure of whether they can protect the nation’s scientists, and some Republicans rethinking just how deep budget cuts may be.

Across the federal government, tensions have soared as reports of cuts at U.S. EPA and the Energy Department invaded confirmation hearings. Rumors of office closings in the Energy Department have trickled into the halls of Congress, as have stories of "hack-a-thons" to save climate data before it disappears.

Lawmakers say they have yet to see evidence of climate data disappearing from government websites, but they’re standing guard, and some question how effective they’ll be at halting a gutting of critical research in clean energy and climate change if that happens.

When asked if Congress could protect the nation’s climate science and research, Democratic Sen. Maria Cantwell of Washington replied, "Not if they get rid of people and their jobs."

Cantwell, ranking member of the Energy and Natural Resources Committee, which has jurisdiction over the Energy Department, said she’s planning to fight such an effort and is watching federal banks of information closely.

"We will certainly stand up and be loud and noisy about it, but if [the White House starts] nixing out people or reassigning them," she said, "I’m just saying, we’re going to follow this very closely."

Others on the ENR Committee said they would also remain vigilant.

"I cannot imagine that anyone would be involved in the destruction … otherwise casting aside scientific data, that’s not something we do, that went out with Galileo," said Sen. Angus King (I-Maine).

Sen. John Hoeven (R-N.D.) said he wants "openness and transparency" in terms of scientists and federal researchers being able to share their findings with the public and with Congress. Nothing he has seen from the Trump transition has raised red flags, Hoeven told E&E News yesterday.

"I would certainly take a look, but I’m not aware of where somebody is being restricted in terms of expressing their scientific view or otherwise," Hoeven said.

Should the data disappear from the agencies’ websites, King said "it would be very disturbing, and as a member of a committee that oversees the Department of Energy, it’s something I would view with grave concern."

An issue among some Senate aides is whether a nominee like former Texas Gov. Rick Perry (R) will use his discretion to scrap, reshuffle or repurpose DOE offices currently focused on energy efficiency and renewable energy. Another looming question is how much coordination will occur between the Office of Management and Budget and various energy and environmental agencies.

"We just don’t know who’s going to be calling the shots," said one Senate aide, "and how much dialogue there will be between OMB and other agencies."

Voicing that uncertainty during an interview on Capitol Hill yesterday was senior appropriator Sen. Dianne Feinstein (D-Calif.), who said she "can’t tell" what she might be up against from the Trump administration in terms of cuts to federal research funding.

Feinstein and Cantwell said their efforts to boost funding for programs not included in the White House budget proposal could run into the moratorium on earmarks Senate Republicans re-imposed earlier this year.

"There are no earmarks, so you can’t add," said Feinstein, ranking member of the panel that sets DOE’s budget. "It depends on what the president puts forward in his budget."

But the chill on climate-related activities isn’t just isolated to the upper chamber or Democrats.

Rep. Mike Simpson (R-Idaho), a top House appropriator on energy issues, questioned aloud during an interview whether his strategy of pushing back at funding of any climate-related activity on Capitol Hill would need to change given financial ties and benefits to other popular programs.

Simpson noted that in past years he’s attempted to steer the Obama administration away from funneling money toward tackling climate change at EPA, but some of the agency’s money does support state and travel grants that help community water and sewer systems.

Despite the ban on earmarks, lawmakers have a strong hand in dictating programs and actions at federal agencies, said Andrew Rosenberg, director of the Center for Science and Democracy at the Union of Concerned Scientists, one group reaching out to federal scientists who feel their work is threatened.

"I think you’re going to find that differing points of view will be allowed, but also during this transition, if you were part of the previous administration and you have a bent toward one focus only, we’re going to push the issue that we want sound science and not simply bending science to the point that you believe in — which we believe has occurred with the previous administration," Rounds said.

Serving as chairman of the Environment and Public Works Subcommittee on Superfund, Waste Management and Regulatory Oversight, Rounds said he found evidence of federal science advisory boards lacking geographic diversity and not listening to input from state and local authorities.

"In many cases, it was not allowing for good decisions to be made, and we think the next administration is probably going to be a little bit more open to lots of differing points of view," Rounds said.

Sen. John Boozman (R-Ark.) agreed he is concerned federal scientists were not transparent enough about the data supporting regulations under the Obama administration.

"As far as doing away with any scientific data, I would be very much opposed to that," he said when asked about climate data being scrubbed.

"Let’s give them a few months to settle in and we’ll see what we are left with," Boozman said of the Trump transition team. He added, "I think sometimes things are being read into that are just normal operational proceedings."

Rosenberg said the Union of Concerned Scientists and others in the scientific community will be monitoring federal websites closely. If the network of watchdogs sees data sets being gutted or other efforts to restrict federal science, Rosenberg said he believes there will be a big public outcry.

"This is not just an inside-the-Beltway kind of game, it’s scientists everywhere trying to pay close attention," he said.