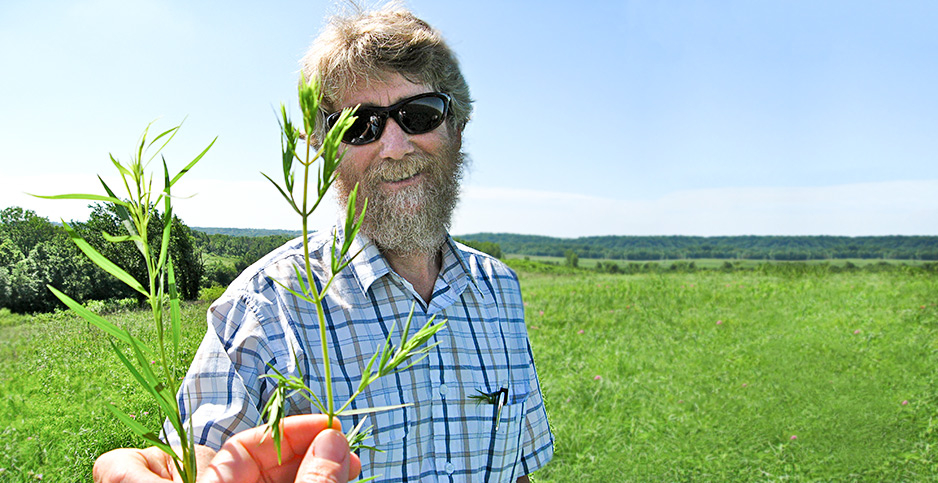 Second in a series. Click here to read the first story and here for the third.

LAWRENCE, Kan. — When Kelly Kindscher is not exploring prairies in the Great Plains, he’s enjoying the hipster culture in this college town.

A professor of environmental studies at the University of Kansas, the 60-year-old Kindscher wears a free-flowing, blondish-gray beard; a short-sleeve plaid shirt; cargo shorts; and sandals. In a state dominated by "big ag," he’s a fan of organic farming, and his academic specialty is the crunchy-sounding field of ethnobotany — the study of how cultures have used native plants over the ages.

"If you want to have a rural economy, you have to focus on culture," Kindscher said in an interview over bread and artichoke dip at a downtown brewpub.

Kindscher is part of a small but vocal group of Kansans quietly pushing back against the loss of native prairie and for restoration of grasslands. He’s trying to teach his students about the value of those lands, especially the wide variety of plants that flourish there and were vital to tribes that lived on the Great Plains.

There’s not much native prairie left in Kansas, and it’s disappeared fast in nearby states, as well. Less than 4 percent of the 140 million acres of tallgrass prairie that once covered eastern Kansas and other areas remains. Of that 4 percent, two-thirds is in Kansas, largely in the Flint Hills region in the eastern half of the state, where rocky ground made farming impractical for early settlers.

Prairie meadows may be home to as many as 40 species of grass and hundreds of varieties of non-woody, flowering plants called forbs, Kindscher said in a prairie management guide for landowners, published by the Kansas Biological Survey.

"When the first Euro-Americans settled on the plains, they converted prairie to cropland with little thought about what they were destroying," he wrote. "One of the most extensive and important ecosystems in North America almost vanished."

That’s just one of dozens of writings Kindscher has published on native prairie plants and preservation of grasslands. In 2006, he and a University of Arizona ethnobotanist, Gary Nabhan, wrote what they called a "manifesto" — an article making the case for restoring prairie as grazing territory for bison.

"We affirm that it would better nourish our bodies and nurture our souls if it were returned to perennial cover, and given over to bison and their ecological associates once again," they wrote.

Kindscher admits he’s sensitive to being tagged as anti-technology — a label that doesn’t quite fit, given his roots in science and research — and he says his work involves people with a wide spectrum of views on land management and agriculture. He’s a founder and member of the board of directors of the Kansas Land Trust, and he’s a board member of the Prairie Plains Resource Institute in Aurora, Neb.

He also flinches a little at the term "restored prairie," which suggests native grasslands can easily be returned to their former state. "I would not say that’s prairie," Kindscher said. "It’s re-established prairie habitat."

Kindscher ought to know. He’s spent his entire life around farms and prairie. A descendant of great-grandparents who came to Nebraska from Switzerland as homesteaders in the 1870s, he grew up on a corn, wheat and cattle farm that he and his brother manage for his 87-year-old mother.

"I wasn’t expecting to return to the farm," said Kindscher, who added he’d rather give it up to an organic farmer but can’t find the right taker. "There’s no opportunity for me to find an organic farmer to take on 100 acres of crops land and 300 acres of rangeland. I don’t know how to get around that," he said.

Kindscher attended the University of Kansas, majoring in environmental studies, and graduated with honors. He went on to earn a doctorate in systematics and ecology at the university, and he’s been called the plains version of John Muir, the renowned early advocate for the preservation of American wilderness.

In 1983, Kindscher and a friend walked nearly 700 miles from Kansas City to Denver, supplementing their diet with edible prairie plants like pigweed and lambsquarters along the way. Although they mostly walked country roads, he said, they took roadless detours in wilder areas such as the Flint Hills and the Smoky Hills, "usually with permission from landowners."

The "Trans-Prairie Walk," as Kindscher dubbed it, inspired his book, "Edible Wild Plants of the Prairie: An Ethnobotanical Guide," published by the University Press of Kansas.

He has an ability to connect with farmers and ranchers that defies the counterculture look, said one of his former doctoral students, Quinn Long, director of the Shaw Nature Reserve at the Missouri Botanical Garden in Gray Summit, Mo.

"They’re going to spot the beard and tussled hair and know he’s not going to be your typical farm guy," Quinn said. But, Quinn added, "he’s able to speak the lingo."

Quinn met Kindscher about 15 years ago, when, as a sophomore at the University of Missouri, they crossed paths on a summer project related to echinacea, the American coneflower that’s an herbal remedy and the subject of Kindscher’s most recent book, "Echinacea: Herbal Medicine with a Wild History," published in 2016 by Springer International Publishing.

When Quinn was looking later to study ethnobotany, he know Kindscher was the right match. And while his doctoral work didn’t put him in a classroom, Quinn said Kindscher had a reputation as an engaging teacher who tried to instill his love of the outdoors. "He’d be the one walking outside and having his class on the lawn on a nice day," he said.

Kindscher’s latest project is to update vegetation maps for southwest Kansas, which should give a clear sign of how much grassland has been displaced by crops — or crops returned to grassland — in recent years. The update will be the first he’s done with extensive work on the ground, as well as satellite imagery, for instance.

"Our purpose is not to map how many acres of corn there are," Kindscher said. "That’s already out there."

And while that project is limited to one part of the state, Kindscher said he’s also watching for signs that one federal program that pays farmers to keep land in grass — the Conservation Reserve Program — is helping animals as well as plants, a story that may play out as Congress debates expanding the program’s acreage in the 2018 farm bill. The lesser prairie chicken, a subject of two decades of debate over endangered status, has been spreading north, thanks to the CRP, he said.

"Birds don’t care, maybe, as much about biodiversity as I do," he said.

Tomorrow: Climate change has renewed interest in learning the lessons of the Dust Bowl.