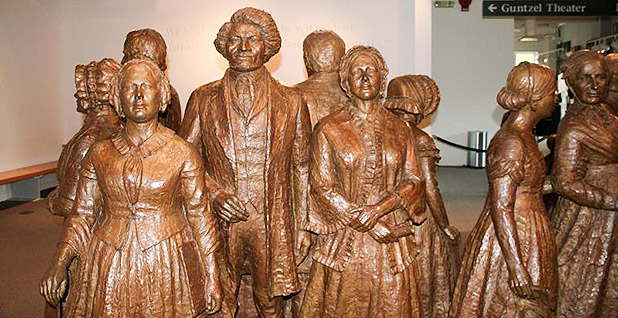 Women's Rights National Historical Park has had to halt public tours due to the federal hiring freeze. Photo courtesy of NPS.

When fully staffed, Women’s Rights National Historical Park has 16 employees to handle everything from maintenance to tours of the 6-acre site in New York’s Seneca Falls.

But the park currently has eight employees, and the hiring freeze means it cannot hire any more. So last week, Superintendent Noemi Ghazala made a decision: no more tours.

In an email yesterday, she said the park has no interpretive rangers. Maintenance workers have instead been filling in to provide visitor services.

"We had announcements on USAJobs.gov, and we were on track to receive the list of qualified candidates the same week that the hiring freeze went into effect," Ghazala said. "As you can imagine, as maintenance workers filled in for interpretive services, the maintenance work fell behind."

The National Park Service has long suffered from an understaffed, overstretched workforce, thanks to a budget that has not kept up with growing visitation and increasing parkland. Park advocates say President Trump’s hiring freeze could make the situation worse, as crucial employees retire and parks are unable to fill the holes.

John Garder, director of budget and appropriations at the National Parks Conservation Association, said the situation at the Women’s Rights park is "the tip of the iceberg" at an agency he says has more than 1,700 vacancies. Other parks may have to cut back on hours and visitor services, he said, unless the hiring freeze is lifted soon.

Until now, "the Park Service has had the discretion to deal with their staffing challenges," Garder said. "This indiscriminate effort completely ties their hands, which is why the impacts would be so damaging."

The White House released guidance last week that appears to exempt seasonal employees from the freeze, to the widespread relief of parks that rely on the temporary employees to handle their busy seasons (E&E News PM, Feb. 1). But the exemption comes with some paperwork requirements that could slow the process: Agencies must inform the Office of Management and Budget of their hiring plans before moving forward.

Zion National Park has not yet received the necessary paperwork to hire the 100 seasonal employees it counts on during the summer, according to spokesman John Marciano. Those employees double the staff of a park that welcomed more than 4 million visitors last year.

The park also has "critical positions" that need to be filled permanently, he said.

"Some of the hiring freeze has impacted critical areas that will certainly affect operations during our high visitation season," he said, citing maintenance, law enforcement, search and rescue, and habitat needs. "Whether we get cleared to resume hiring procedures or not, we are already behind the curve in terms of time to train."

Yellowstone National Park, meanwhile, has 70 vacancies for permanent positions, including 16 that it calls "high priority."

Seasonal employees can help fill in gaps left by permanent vacancies, at least for six months of the year. But they have limits. The operator of a wastewater treatment plant, for example, has to have a license to run it. Cultural resource specialists have the needed expertise to direct repairs to historic buildings. And many parks rely on full-time engineers, scientists and various other employees with high-level degrees.

"A freeze today is on top of what’s been cumulatively happening over the years," said Phil Francis, who was superintendent of the Blue Ridge Parkway until he retired in 2013. "The morale of the service is down, people are asked to do more and more as the average age is increasing. It’s pretty hard on our staff."

Almost half the NPS workforce is older than 46, raising the risk that retirements could increase during the hiring freeze. Garder of NPCA said he has "heard reports" that some employees delayed retirement last year to help with the Park Service’s centennial events.

Garder and Francis expressed some optimism, however, that the Trump administration might make an exception for parks. They pointed to a promise Rep. Ryan Zinke (R-Mont.) made in his confirmation hearing for Interior secretary to ensure rangers "have the right tools, right resources and flexibility to make the right decisions that give a voice to the people they serve."

Gardner said, "Americans don’t want rangers to join the list of endangered species in our national parks, which is why any member of Congress who cares about parks and their visitors should be urging the administration to exempt the national parks from the hiring freeze."